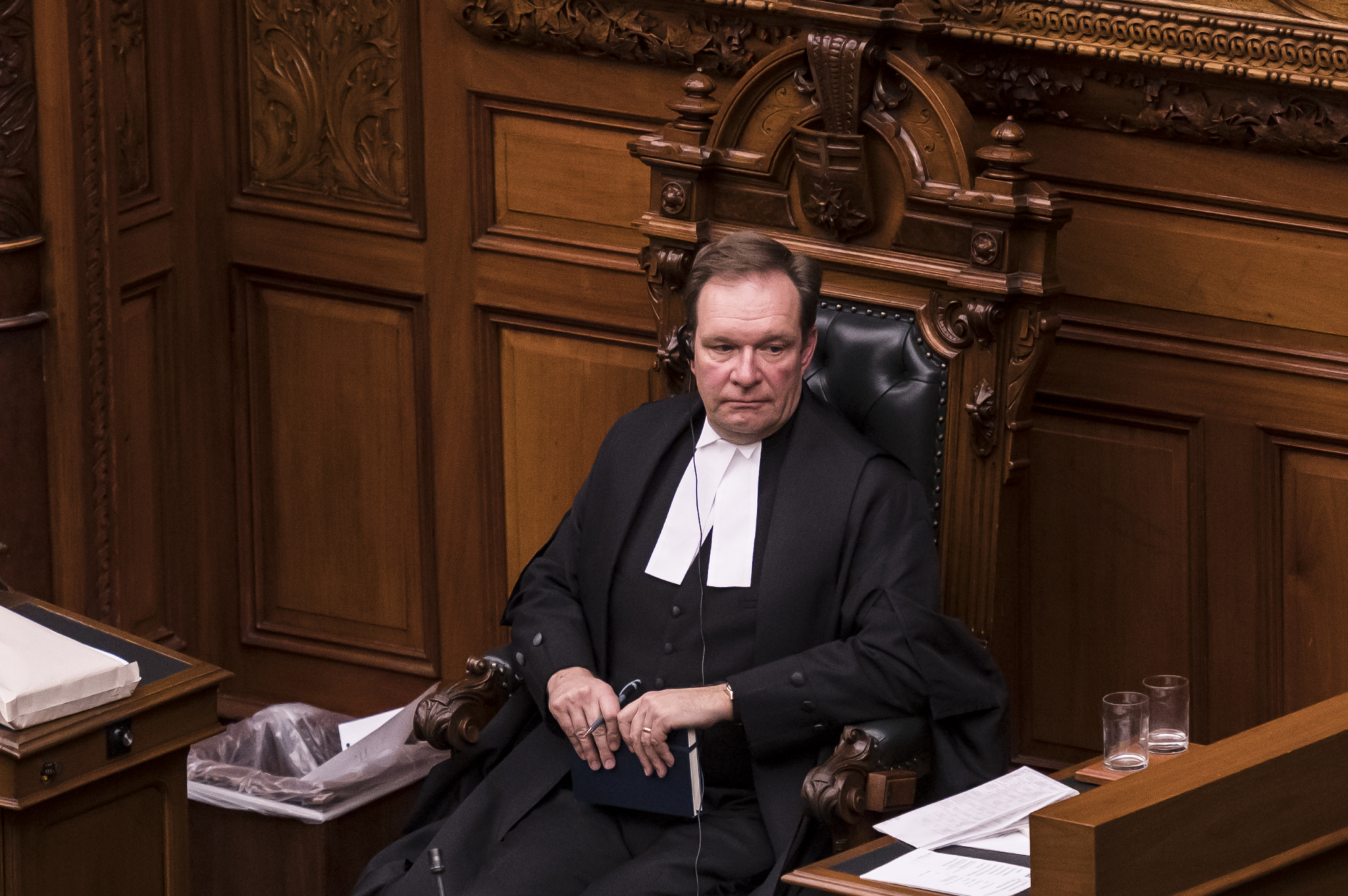 Conservative MPP and Speaker of the House in Queen's Park, Ted Arnott, listens to discussions on April 11, 2019. Photo by Christopher Katsarov
Previous story
Next story

Not so long ago, a Progressive Conservative politician in Ontario was dreaming about trees.

"Imagine a province-wide effort to plant 150 million trees to celebrate the 150th anniversary of Ontario," said the Tory MPP, Ted Arnott, as he addressed the provincial legislature on Oct. 21, 2015.

"Imagine an invitation to every community group, service club, school board, church, municipality, conservation authority and so on — the private and public sectors alike — indeed, every organization that seeks to do good works in the province, and every resident of Ontario who cares about the environment, greenhouse gas emissions and global warming, and the planet that we leave to the coming generations."

Arnott serves as the MPP for the eastern Ontario county of Wellington, where a movement to plant 150,000 trees to mark its 150th anniversary in 2004 garnered international recognition. At the time he made the comments, he was his party's environment critic.

In 2010, the year the county planted its one millionth tree, the United Nations Billion Tree Campaign recognized the county's Green Legacy Program to provide free trees to conservation authorities, municipalities, community organizations, environmental groups and landowners. By the time Arnott stood to propose a provincial tree-planting program, the county had distributed its 1,750,000th tree and been recognized by three local conservation authorities. It had also received the Lee Symmes Municipal Award from Ontario Nature.

"Could we do it, Mr. Speaker? Could we actually plant 150 million trees in one year?" Arnott proposed in a motion to the legislature on Oct. 21, 2015, seeking "a more ambitious tree planting target" than the one proposed by Kathleen Wynne's Liberals which aimed to plant 50 million trees.

The legislature unanimously endorsed the 2015 motion to triple the goal of the province-wide tree-planting program.

But Arnott might not be able to say much about this decision today.

The MPP for Wellington is now the speaker at Queen's Park. This means that he presides over debates and is required to be an impartial and unbiased member of the legislature.

In an email to National Observer, Arnott said, "As Speaker of the Legislative Assembly of Ontario, it would be most inappropriate for me to make a public comment on this issue. The Speaker must be non-partisan, and cannot publicly comment on matters which are before the Legislature, or are likely to be debated in the Legislature."

The Ministry of Natural Resources and Forestry told Forests Ontario the day after the Progressive Conservative government delivered its April 11 budget that funding for the program was being eliminated, ending more than 300 full-time seasonal jobs across Ontario for "those who collect tree seeds, grow saplings, recruit sites for tree planting, assess the sites, plant trees and inspect planted trees."

The Ontario government has funded tree planting in southern Ontario for more than a century, said Forests Ontario in a statement. The program was created in 2007 to expand and create new contiguous forest cover. Since then, Forests Ontario and its partners have planted 27 million trees in Ontario on over 4,000 properties covering close to 15,000 hectares as a carbon sequestration effort — the process of naturally removing carbon from the atmosphere.

Forests are able to extract carbon from the air and incorporate it into their biomass. Reforestation programs such as the 50 Million Tree Program are widely accepted to contribute to speeding up that process and help reduce greenhouse gas emissions, which contribute to global warming and climate change. Planting trees also contributes to better public health and helps mitigate flooding.

There are many other science studies by my colleagues that have revealed how important it is to plant trees in and around our towns and cities to improve the health and wellbeing of local residents - especially improved local air quality. Planting trees is good for public health pic.twitter.com/lt4CWHDGX0

Forests Ontario planned to plant 2 million trees this spring to continue this work.

The government provided $4.5 million a year to the 50 Million Tree Program, which translates to a mere $1.50 per tree. Landowners pay 20-40 cents per tree.

According to a recent Green Analytics report, the value of ecosystem services derived from the trees planted through Forest Ontario’s efforts is conservatively estimated at $82.7 million annually with significant benefits derived from pollination and dispersal, recreation opportunities and nutrient and waste regulation. For every $1.80 that Forests Ontario spends to support tree planting, approximately $19.85 is saved in economic and environmental costs.

On Thursday, a spokeswoman for Natural Resources and Forestry Minister John Yakabuski told Canadian Press the government is committed to balancing the budget in a responsible manner.

Justine Lewkowicz said in a statement that the forestry industry, which depends on a sustainable supply of wood, is a responsible steward of the province's forests: "On average, the forestry industry plants 68 million trees per year, creating jobs for foresters, nurseries and tree planters," she wrote, without noting how many trees are harvested per year.

Without a single taxpayer dollar, the forestry industry plants 68 million trees each year -- far exceeding what the taxpayer-funded program has ever done in its 12 years of existence. https://t.co/A4XdEZOgEb

To environmentalists, it is ironic that members of the Doug Ford government once spoke in favour of tree planting as a combative measure against climate change.

Faisal Moola, a University of Guelph professor who specializes in forest conservation and management, said Arnott was a rare Tory MPP who advocated for environmental issues. Moola recalls meeting with Arnott when he proposed his motion to expand tree planting and was "impressed" by his "knowledge of forest science," as well as his ability to build "broad support for tree planting among MPPs in his own PC caucus as well as NDP and Liberals."

"I have been studying and writing about environmental policy for many years. Sadly, it is very rare to see politicians come together to unanimously support bold environmental action, like planting millions of trees, for the benefit of biodiversity and welfare of local communities," Moola wrote on Twitter.

I was not just impressed by PC MPP Ted Arnott's knowledge of forest science and silviculture in the meeting (e.g,. role of trees in mitigating climate change), but his success in building broad support for tree planting among MPPs in his own PC caucus as well as NDP and Liberals.

Arnott told the legislature in 2015, when he served as environment critic, that his motion "starts from the simple premise that global warming is a fact, and if human activity in the form of greenhouse gas emissions is a contributing or accelerating factor with regard to climate change, as the vast majority of our scientific community worldwide believes, then humankind needs to plant more trees to absorb the excess carbon in the earth’s atmosphere."

Speaking in support of Arnott's motion in 2015, Tory MPP Lisa Thompson (now Ford's education minister) said, "I can't think of a better way to celebrate this occasion than by planting 150 million trees across this province."

Thompson cited a report published in The Atlantic in February 2014 which said "the best technology for fighting climate change is trees." The same report also cited an Oxford University report, in which researchers say — and Thompson quoted — "our best hopes might not be so complex. In fact, they are two things we already know how to do: plant trees and improve the soil."

Trees, Thompson concluded, will "help the atmosphere no matter what, they're comparatively low-cost, and they carry little additional risk. Specifically, the two techniques (the report) recommends are afforestation—planting trees where there were none before— and biochar— improving the soil by burying a layer of dense charcoal."

When this exchange was brought up on Twitter by Moola, former Tory MPP Rob Leone commented that the unanimous vote on the 2015 motion was the legislature expressing its opinion at a different time. "The fiscal situation is much worse in 2018 despite a robust economy..." he wrote in a tweet — echoing the Ford government's commitment to put the economy on a "path to balance."

About a motion expressing the House's opinion in 2015 and getting to government when the fiscal situation is much worse in 2018 despite a robust economy? Lots of thoughts cross my mind about this, yes.

Tropical forests are being replanted, but how long will the new trees last?

The burning secret in B.C.'s forests

Speaker Arnott is my MPP. I

Speaker Arnott is my MPP. I regularly write to him with my concerns and, unlike most of his colleagues, he always responds courteously, but now with his disclaimer of partisanship, or participation in debate. None of his party's Ministers to whom I also write have ever replied, courteously or not. So much for their motto "For the People". Bah Humbug.

Is it possible to pressure

Is it possible to pressure the Ford government to re-think this departure in the face of flooding in Quebec caused by not only climate change but by lack of oversight on wetlands and streams and rivers impacted by urban development?
Can enough pressure by put on this government to re-introduce the tree planting now?