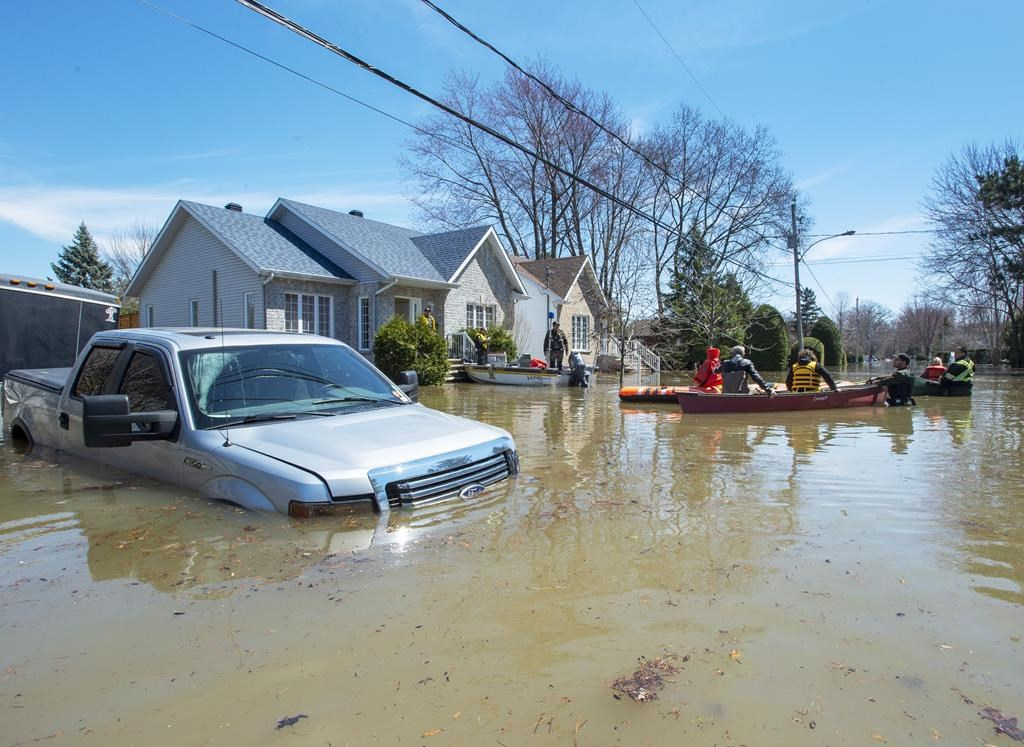 Robert Pepin's mobile home sits crookedly on its foundation, the front door is broken, the insulation and deck are damaged beyond repair.

But the 70-year-old resident of Ste-Marthe-sur-le-Lac, Que., says he's happy and less anxious because he's been able to visit his home and see what the water did to it.

"(Before) there was so much pressure in your head," Pepin said. "You think all the time, you can't sleep. What am I going to do, is my house finished? Now you see what's there, and you deal with it."

Over the weekend water from the Lake of Two Mountains breached a dike and rushed through the Montreal suburb, forcing Pepin and about 6,000 others from their homes. On Tuesday, residents of 1,485 homes that were spared the flooding were cleared to return home, though authorities said they would be without running water or electricity for an indefinite period.

The partial lifting of the evacuation was a rare glimmer of hope in a province that has been fighting flooding for two weeks. "The worst is behind us," Public Security Minister Genevieve Guilbault said earlier in the day.

Some 2,500 soldiers remain stationed in flood-ravaged regions of New Brunswick, Quebec and Ontario, and various communities have declared a state of emergency. As Quebec and New Brunswick saw improvement on the horizon, in Ontario the situation was "potentially worsening," federal Public Safety Minister Ralph Goodale said Tuesday

So far about 1,600 people have been forced from their homes across Ontario, Goodale said, most of whom are from the northern First Nations territory of Kashechewan.

City officials in Ottawa Tuesday said the bloated Ottawa River and its tributaries are expected to rise "over the next several days." At an afternoon briefing, officials said they were closing a street through the heart of the flood-affected area of Constance Bay and asking 150 households to voluntarily evacuate.

The river is already 30 centimetres above the peak levels of severe flooding in 2017, and could go up another 20 centimetres depending on the weather in the coming days. Forecasts call for snow, ice pellets and freezing rain, followed by up to 40 millimetres of rain by Thursday morning.

"The worst is yet to come," Ottawa Mayor Jim Watson said.

In New Brunswick, the province's director of emergency measures, Greg MacCallum, said Tuesday the response to this year's spring flooding is slowly turning into a recovery operation.

"Most regions along the Saint John River should be out of the flood stage by the end of this week," he said. He said water levels along most of the river are making a slow but steady decline.

Bill Lawlor, the New Brunswick director of the Canadian Red Cross, said while some people have begun returning to their homes, the agency is still housing 433 people in hotels.

Goodale said about 9,200 residences and cottages remain flooded in New Brunswick along with 7,000 other properties of different kinds.

Earlier on Tuesday, Prime Minister Justin Trudeau said investments in climate-resilient infrastructure and mitigation measures will be needed in the fight against climate change.

"We recognize that there is an increasing reality that, almost every year, we're dealing with people having to evacuate their homes, protect their homes from rising floodwaters," Trudeau told reporters. "These extreme weather events are going to happen more often."

As of Tuesday afternoon, before the evacuation order was partially lifted in Ste-Marthe-sur-le-Lac, a total of 6,704 residences were flooded in Quebec while 3,483 were surrounded by water. More than 10,000 people had been forced from their homes.

Quebec Premier Francois Legault told a news conference in Quebec City that an analysis will be conducted looking at dikes across the province. He said the 3.5-kilometre dike that was breached in Ste-Marthe-sur-le-Lac was last repaired in 2009. After record flooding in 2017, a private firm determined it needed millions of dollars of additional work to be reinforced.

The town's mayor had requested an environmental assessment, with work expected to begin this fall. "We're in a situation where no one thought it was that urgent, or that what happened Saturday would happen," Legault said.

In the town northwest of Montreal, teams of firefighters, Canadian Forces and police used small Zodiac-style boats Tuesday to escort residents, like Pepin, back to their flooded homes. The hardest-hit areas still looked like a disaster zone. Cars sat submerged almost to their rooftops, and water reached nearly to the living room windows of some homes.

Jocelyne Martin, 68, noted that most of the residents are retired, living in relatively inexpensive mobile homes that may not be eligible for much compensation.

"I don't know what we're going to do," she said. "We don't even know what they'll do with the houses. I heard they'll be demolished but I don’t know, we'll see," she said after her trip to retrieve belongings including clothes and her passport.

But despite the dire situation facing some residents, Pepin wasn't the only one expressing relief after making a first visit home.

Darlene Ratelle was glad to see that while water was high on her street, the interior of the home appeared untouched.

"It looks like a wasteland out there, it really does, but to go in the house to see that everything inside is nice, all intact, it helps," she said.

— With files from Jordan Press and Kevin Bissett