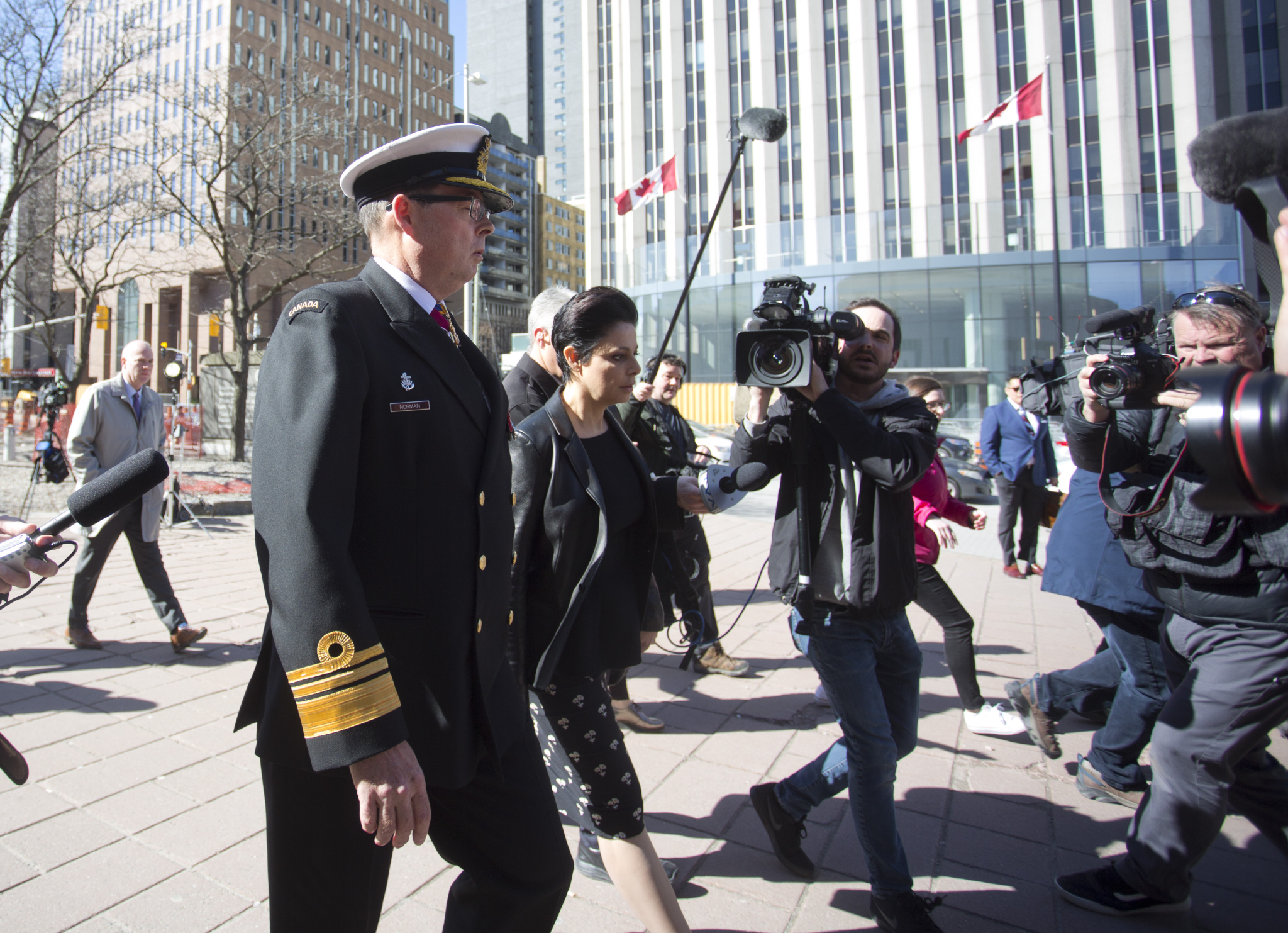 Vice-Admiral Mark Norman and lawyer Marie Henein walk to the Ottawa courthouse on Elgin Street on May 8, 2019. Photo by Andrew Meade
Previous story
Next story

Canada's justice minister and independent prosecutors strongly denied accusations on Wednesday from the Opposition Conservatives of political interference in the justice system, as the Crown dropped a high profile criminal charge, upending the expected 2019 trial of Vice-Admiral Mark Norman.

In a startling turn of events, prosecutors said new information had come to light that had led them to believe there was no longer a reasonable prospect of conviction.

Norman had been accused of leaking cabinet secrets in connection with a $668 million shipbuilding contract. In an Ottawa courtroom Wednesday, the Public Prosecution Service of Canada requested that the breach of trust charge against Norman be stayed, explaining that they believed he had crossed ethical lines, but didn't believe there was evidence to prove he had committed a crime.

"We have come to the conclusion that, given the particular situation involving Vice-Admiral Mark Norman, there is no reasonable prospect of conviction in this case," said Barbara Mercier, general counsel for the prosecution, in court Wednesday morning.

Political observers anticipated that the case would cause headaches for Prime Minister Justin Trudeau's Liberals on the eve of the fall election campaign with former federal minister Scott Brison and Liberal MP Andrew Leslie both expected to testify.

Director of Public Prosecutions Kathleen Roussel issued a statement Wednesday that made clear there was no "contact or influence from outside the PPSC, including political influence."

As in every case prosecuted by the PPSC, the statement read, "only two factors were considered: whether there was reasonable prospect of conviction and, if so, whether it was in the public interest to proceed with the charge."

Inside and outside the courtroom, Mercier also rejected accusations that political figures had interfered with the case.

"There was no orchestration of this charge" and "no interference whatsoever" in the PPSC's decision to commence the prosecution, or in its decision to end it on Wednesday, Mercier said in court.

"I can tell you there was no political interference in this case," she repeated to media outside the courthouse.

Justice Minister David Lametti said the decision to drop the case was made at the discretion of the PPSC. Exiting caucus on Parliament Hill, he echoed comments denying interference.

But a few hours later in question period, Conservative Leader Andrew Scheer accused the prime minister of exerting pressure on the prosecution. "The prime minister tried to interfere in a shipbuilding contract," Scheer declared. "We've seen this before and it's a dangerous pattern with this government."

Conservative MP Peter Kent said outside the House that prosecutors "have had a terrible climate in the prime minister and the Prime Minister’s Office," accusing him manipulating civil servants into "exercising political vengeance" on a "highly honourable naval officer who has served Canada so well."

NDP Leader Jagmeet Singh called for a probe into the issue. "Canadians deserve the truth," he said. "Why is the prime minister refusing to hold an independent investigation into the Liberals' handling of this case?"

Responding to questions on the matter, Lametti repeatedly stood and defended the independence of the PPSC. "This was under the sole jurisdiction of the director," he said. "On this side of the House, we believe in our judicial institutions."

Prime Minister Justin Trudeau, who was not in question period, said before a caucus meeting Wednesday that "the process involved in public prosecutions like this is entirely independent of my office."

Henein: 'I think it’s time to say sorry to him'

Norman was alleged to have leaked cabinet secrets to a CBC journalist and an executive at a Quebec shipyard, Davie.

The Liberal cabinet met on Nov. 19, 2015 and decided to delay the Davie project after receiving a letter from Irving Shipbuilding, which has competed with the firm.

Months after the CBC report, the journalist who broke the story accepted a job as a political adviser in the office of National Defence Minister Harjit Sajjan. The former journalist currently works for Democratic Institutions Minister Karina Gould.

At a press conference held after the courtroom appearance, the former top brass said he had “an important story to tell that Canadians will want and need to hear. It is my intention in the coming days to tell that story, not to lay blame but to ensure that we all learn from this experience.”

He described a "bias" against him, although he declined to point any figures at particular leadership figures. “The defence procurement system is extremely complex, it is not a simple process,” he said.

“I am confident that at all times I acted with integrity, I acted ethically, and I acted in the best interests of the navy, the Canadian Armed Forces and all Canadians.”

Toronto lawyer Marie Henein, who was leading Norman's defence team, said the vice-admiral was owed an apology following comments made by “anonymous sources” in government.

“I think it’s time to say sorry to him," she said.

Norman: 'I’m ready to go back to work'

The PPSC had laid a charge in April 2018 after considering the public interest and other factors at play for over a year following the Royal Canadian Mounted Police's raid of Norman's home in January 2017.

Norman said after the years-long ordeal, he was looking forward to returning to service in the military. “I’m ready to go back to work,” he said.

Defence Minister Sajjan said outside the House of Commons that he was going to allow Chief of the Defence Staff General Jonathan Vance to have discussions with Norman about returning to work.

"This decision has just been made and I think it’s appropriate given the circumstances to allow General Vance to have this conversation to discuss the next steps," he said.

Vance issued a statement of his own later on Wednesday, pointing out that the stay of proceedings had eliminated the reason for which he had relieved Norman of military duty.

He said he would discuss Norman's return to regular duty "at the earliest opportunity."

“This decision ends court proceedings that have been a long and difficult process for Vice-Admiral Norman, his family and for the Canadian Armed Forces. We have missed Vice-Admiral Norman a great deal and I look forward to welcoming him back to work as soon as possible," said Vance.

Sajjan also said he had agreed with the deputy minister of national defence's advice to approve Norman's request to have his legal fees covered.

"Oh. Wow." Norman said in response, when informed of the news.

Mercier: 'I cannot get into the specifics'

On Wednesday, Mercier explained that the defence team of the former vice chief of the defence staff had met with prosecutors March 28 to hand over new information.

She would not reveal the details of this information, only to say that it came from the defence, provided "greater context" and revealed "a number of complexities" in the process "that we were not aware of."

"It continues to be our view" that "some" of Norman's actions "crossed the line," Mercier told the judge in Courtroom 37 of the Ottawa courthouse on Elgin Street.

But "inappropriate does not mean criminal," she added, particularly given that the burden of proof in a breach of trust case is "rightfully high," and requiring "multiple elements" to be proven beyond reasonable doubt.

Outside the courtroom, Mercier revealed little other details. "I can't get into the specifics, but I can tell you that it did call into question whether or not we can prove serious marked departure, which is something we must prove in a breach of trust case, and prove it on a very high standard," she told reporters.

"This was a very complex case. I cannot get into the specifics of that information. The defence counsel gave it to us under certain conditions, for our purposes only. But I will say that absorbing it, comparing it to investigative materials, we came to that conclusion, that there is no reasonable prospect of conviction."

A federal procurement official, Matthew Matchett, was also charged with breach of trust on Feb. 13. His lawyer Matthew Day said the RCMP had told him two years ago he was a suspect in the Norman investigation.

On Wednesday, in declining to explain details about the new information, Henein referred to "another prosecution that is outstanding" that the Crown had certain "obligations" towards.

In contrast, she said her own involvement in the process "as well as our ability to compel production" had now ended.

After 38 years of service in the military, "it has been a profoundly painful time" for Norman and his family, said Henein in court. The cost over the last two years "can never be repaid," she said. "It has been difficult and it has been demoralizing."

She also spoke to the "tradition of prosecutorial independence" and noted her gratitude to federal prosecutors.

The shipbuilding contract was conceived under the former Harper government but came to a key decision point under the new Liberal government in November 2015.

News that Crown prosecutors were likely to drop the case broke Tuesday evening, a few days after media reported that former Parliamentary secretary Andrew Leslie had indicated he is on the witness list to testify against the government on behalf of Norman, if called.

Leslie, an Ottawa-area Liberal member of Parliament, is a former Canadian military lieutenant general and the two have worked together in the past, including on Leslie's well-known 2010 departmental transformation report.

The Conservatives have also said the government has been too slow at handing over documents to the defence. Many documents have been blanked out. They have also accused Brison of inappropriate actions in connection with a contract with Davie shipyards. Brison has denied wrongdoing.

The case was still in the pre-trial stage but was expected to begin trial in August. That could have meant the trial would have been happening during the 2019 federal election campaign.

Editor's note: This story was updated at 1:07 p.m. ET on May 8, 2019 to include additional information from post-courtroom press conference and from Parliament. It was updated again on 2:41 p.m. ET on the same day to include details from Question Period.

From the very beginning there

From the very beginning there were, in my mind, multiple questions and doubts about this case. While knowing less than nothing about the specifics of the tendering process or the politiccal considerations that were most likely in play, I nevertheless had a visceral reaction against the prosecution.

The fact stands that there is no excuse for the lack of transparency in Canadian military procurement. It is ludicrous to think that any equipment we acquire would have top secret cutting edge technology. No vital security issues are likely to be in play here. Canada is clearly NOT in the avant garde of military armaments. Nor are there so many suppliers of equipment that it would cause untold proprietary harm for bids to be disclosed.

Paranoia and inflation of political importance seems to have driven this persec..., oops Prosecution.