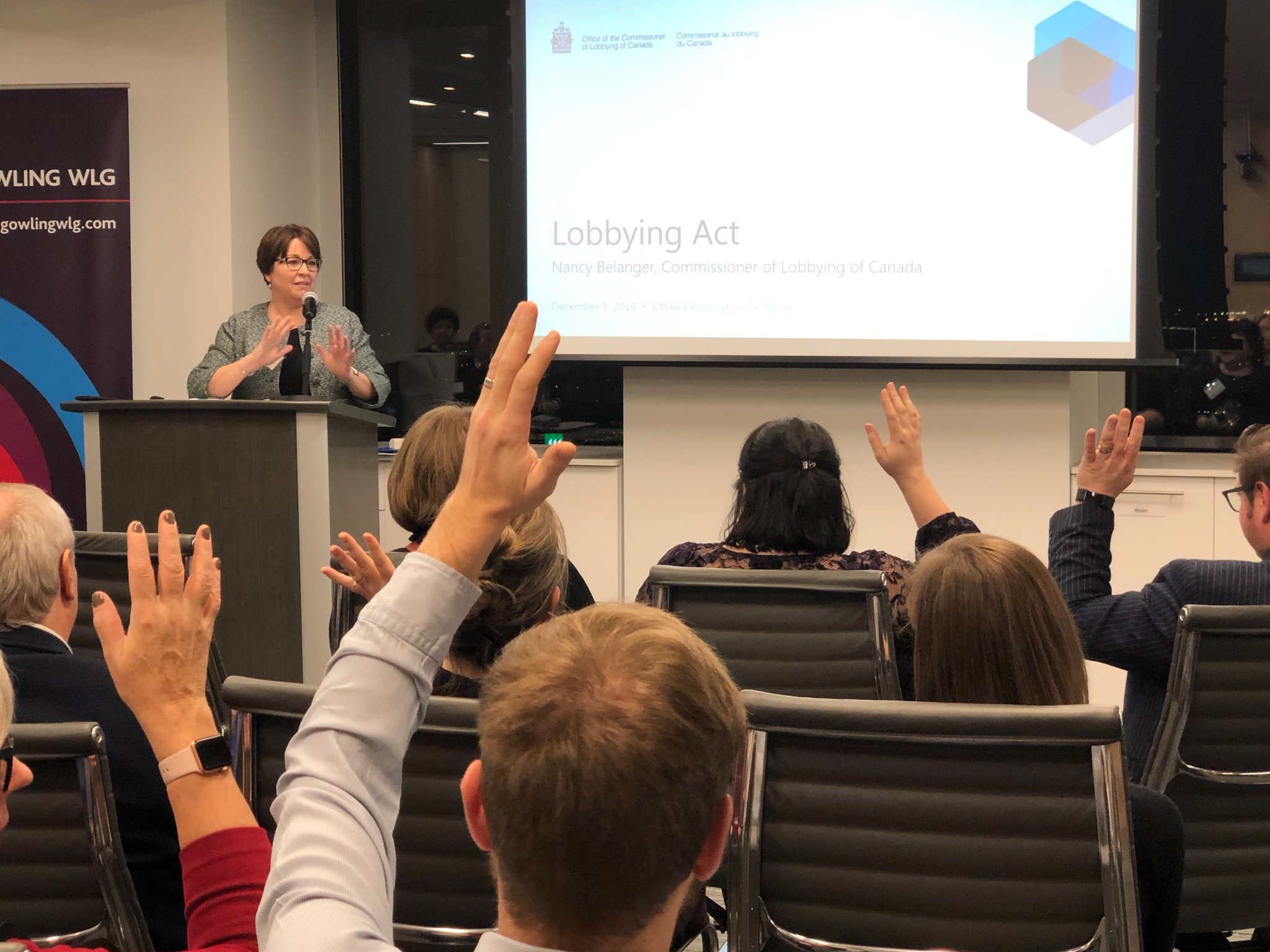 A parliamentary watchdog is warning lobbyists to be careful about participating in partisan activities such as fundraising events and expressing personal political views in public, to avoid placing themselves in a conflict of interest.

Federal Lobbying Commissioner Nancy Bélanger delivered the warning in updated guidelines for lobbyists, posted online on April 2, a few days after a significant court ruling that also appeared to expand the scope of the federal Lobbying Act. The new guidelines shift some activities her office had previously considered to hold “no risk" into a new category that she said does carry risks of placing a lobbyist in a conflict of interest situation.

Attending fundraising events, scrutineering for a candidate and speaking on a political panel when expressing personal views, were all previously considered by Bélanger's office to be lobbyist activities that didn't reasonably put politicians into a situation where they felt obligated to return the favour.

Now, Bélanger says that if lobbyists frequently attend partisan fundraisers, scrutineer or express "personal political views strictly in an individual capacity," then they "should exercise caution" if they are considering lobbying a politician connected with those activities.

The new categorization reflects the fact that the risk of a conflict of interest “increases with the degree of interaction with candidates,” said Bélanger’s senior communications advisor Manon Dion in an email.

The new guidance may affect some strategists and consultants in Ottawa who are registered to lobby and who regularly appear on political panel TV shows, depending on whom they lobby, what personal views they express and how frequently they appear.

Bélanger, who was appointed in December 2017 for a seven-year term, also narrowed her advice on other lobbyist activity related to riding associations.

Previously, lobbyists serving on the executive or board of directors of a riding association could “pose a risk of creating a sense of obligation," her office had said. Now, she is only warning against holding specific positions in a riding association, like being its financial agent, auditor or spokesperson, or soliciting donations and turning them over to the organization.

“Overall, the substance of the guidance remains the same, but some items were updated to reflect the advice our office provides when people contact us,” wrote Dion. She said the commissioner updated the guidance “to make it simpler and easier to understand.”

'Nothing can be guaranteed to hold no risk'

Federal political parties continue to face scrutiny over their relationships with lobbyists. National Observer revealed May 1 that two Loblaws lobbyists, who had given thousands of dollars to the Liberal Party, also attended a Liberal “donor appreciation event" while the company was waiting to see if it had won a federal grant competition.

As well, Conservative Party Leader Andrew Scheer participated in an election strategy session with oil executives in Alberta, including leaders of four oil companies and the president of Canada's largest oilpatch lobby group, the Canadian Association of Petroleum Producers (CAPP). At that event, a panel called “paths to federal election victory" was led by a polling firm executive introduced by Tim McMillan, CAPP's president, according to The Globe and Mail.

CAPP disputes that the event was political or related to the election. The organization has said it is non-partisan and sees its role as an advocacy association for the energy industry. It says it has met with officials from the prime minister's office, as well as federal ministers' offices.

As part of his initial response to the Loblaws story, party spokesman Parker Lund had pointed to Bélanger's guidance document, noting it is "clear that attending fundraising events and making donations within the limits of the Canada Elections Act carries 'no risk of creating a sense of obligation.'" That guidance is now outdated following Bélanger's April 2 update.

Philip Cartwright, president of the Ottawa-based Government Relations Institute of Canada, which advocates for public relations professionals, said the group and others had been consulted by the commissioner to revise the document.

He said he was happy with the outcome. "Ultimately, our sense was this change stemmed from the belief that nothing can be guaranteed to hold no risk," said Cartwright, who is also senior vice president, Ottawa of Canadian government relations firm Global Public Affairs.

"I think it also offers some additional nuance and context for lobbyists regarding acceptable kinds of political activity.”

However Duff Conacher, co-founder of Democracy Watch said his organization had not been consulted.

Conacher said he believed the change of language on lobbyists attending partisan fundraising events stemmed from the controversy that parties have faced over the issue. “Lobbyists should be definitely careful with those kind of events, which are really pay to play, cash-for-access events," he said.

"I think she’s probably carving that out, because if it is a high-priced, exclusive event, where it really is a cash-for-access type event, then you would be paying for access, and your payment would cause a conflict."

Any director, 'even if they just make one phone call'

Bélanger's office is also dealing with a federal court ruling on March 29 that ordered her to revisit a decision by her predecessor Karen Shepherd to approve Prime Minister Justin Trudeau's vacation to the Aga Khan's private island in the Bahamas.

The court ruling, which the government is appealing, would significantly broaden the law to define potentially hundreds more people as lobbyists than are currently registered, according to Conacher, whose organization filed the case challenging the September 2017 ruling by Shepherd.

Federal Court Justice Patrick Gleeson said Shepherd had restricted her analysis of the Aga Khan's lobbying to just the question of whether he received monetary payment. Since he hadn't, Shepherd had declined to investigate the matter further.

But Gleeson said the Lobbying Act defines “payment” as both “money” and “anything of value." For example, he said, "without expressing any view on the question, ‘anything of value’ might reasonably include a directorship within a corporation or organization, even in circumstances where the position is voluntary."

In that sense, all lobbying activity by all board members of all organizations, regardless of whether they're paid, would fall under the Lobbying Act, argued Conacher, and could lead to hundreds of more registrations in the lobbying registry, if the ruling is upheld by the higher court.

"According to the federal court ruling, any of the board members who do any kind of lobbying at all, for those businesses and for those NGOs and other organizations now have to register," said Conacher.

"That’s going to capture pretty much any board member, even if they just make one phone call.”

Democracy Watch has counted 394 businesses and 581 organizations in the registry, the latter of which includes industry associations and non-governmental organizations.

Editor's note: This story was updated on May 16, 2019 at 1:30 p.m. to add CAPP's disagreement that the session attended by Scheer was political or related to the election.