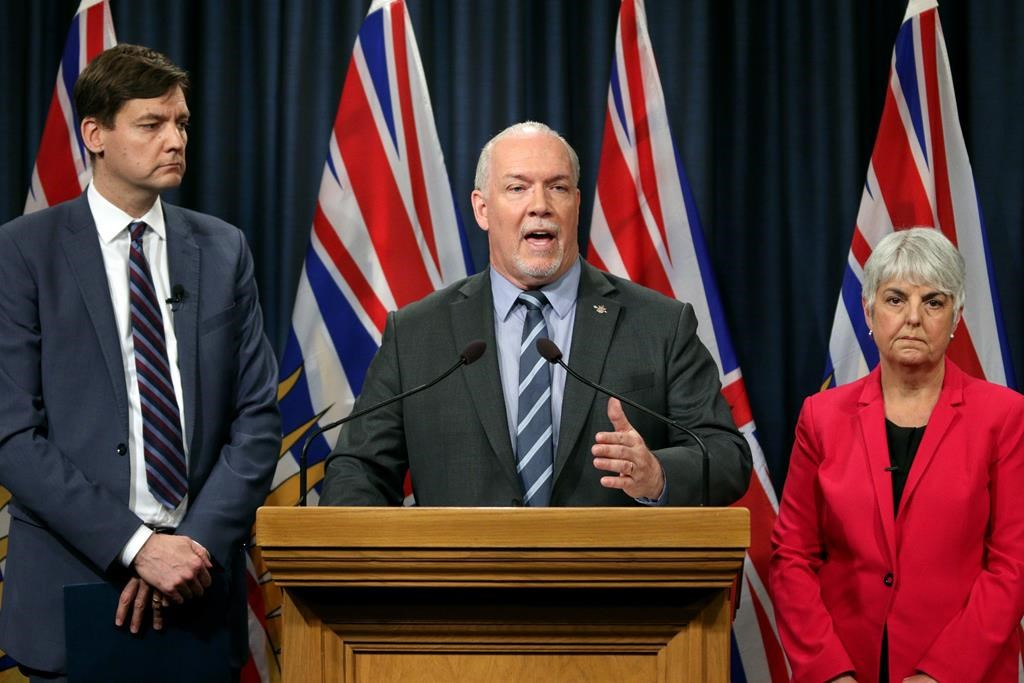 John Horgan is joined by Carole James and David Eby as they announce a decision to move forward with the public inquiry in light of recent findings on money laundering during a press conference in Victoria, BC, on May 15, 2019. Photo by The Canadian Press
Previous story
Next story

The impact of money laundering in B.C. was highlighted in two independent government-commissioned reports released last week that connected the practice to real estate and concluded more than $7 billion in dirty money was laundered in the province last year, said Horgan.

"It became abundantly clear to us that the depth and the magnitude of money laundering in B.C. was far worse that we imagined when we were first sworn in," he said. "That's why we established the public inquiry today."

Horgan's New Democrats formed a minority government in the summer of 2017 after 16 years of B.C. Liberal governments.

One of the reports by former deputy attorney general Maureen Maloney said $5 billion was siphoned into real estate in 2018, forcing the costs of homes up by at least five per cent. It said that figure could be significantly higher — upwards of 20 per cent — in Metro Vancouver.

The second report by former deputy RCMP commissioner Peter German said the infusion of illicit money into the B.C. economy led to a frenzy of buying in real estate. A previous June 2018 report by German found Metro Vancouver casinos were used to launder hundreds of millions of dollars in illicit money.

Horgan said a public inquiry will give an understanding of how the problem reached this point and how to eradicate the crime.

"We sat down as a cabinet and said, 'how can we ensure that the people of B.C. see consequences for the actions of criminals and criminal activity in B.C.,' " he said.

B.C. Supreme Court Justice Austin Cullen was appointed to lead the inquiry and can compel people to testify, seize records and obtain search warrants. Cullen's inquiry is expected to deliver an interim report within 18 months and a final report is due by May 2021.

Among the inquiry's terms of reference is an examination of how the acts or omissions of regulatory authorities or individuals "have contributed to money laundering in B.C. and whether those acts or omissions have amounted to corruption."

"Perhaps other governments were intoxicated by the revenues that kept coming in," Horgan said.

Michael Lee, the Liberal attorney general critic, said the party will co-operate with the inquiry. But he did not say if that would include voluntarily providing confidential cabinet documents that may be related to money laundering.

Rich Coleman — the Liberal party's solicitor general who said he reformed gambling laws during his tenure as the minister responsible for gaming — said he agreed with calling a public inquiry and will testify.

Organized Crime Reduction Minister Bill Blair said money laundering is a complex issue and all levels of government and law enforcement must work together as he promised co-operation from the federal government.

In a statement, Blair said Ottawa will "continue to work collaboratively" with Eby and German "on intelligence gathering and information sharing."

Prof. Tsur Somerville, an expert on the impacts of money laundering on real estate at the University of British Columbia's Sauder school of business, said the public inquiry will examine regulatory oversight on the real estate industry.

"It sends a general statement that there's going to be a closer supervision of the industry in terms of what findings are coming, from where and how they are being used," said Somerville, who was one of the expert panel members for Maloney's report.

Maloney's report said money laundering is a Canada-wide issue. It said B.C. ranked fourth for the crime among a division of six regions in Canada, behind Alberta, Ontario and the Prairies — collectively Saskatchewan and Manitoba — for the years 2011 to 2015.

It also said B.C. only accounted for 15 per cent of the $47 billion laundered across Canada last year.