Canada vs UK: lessons in the climate fight 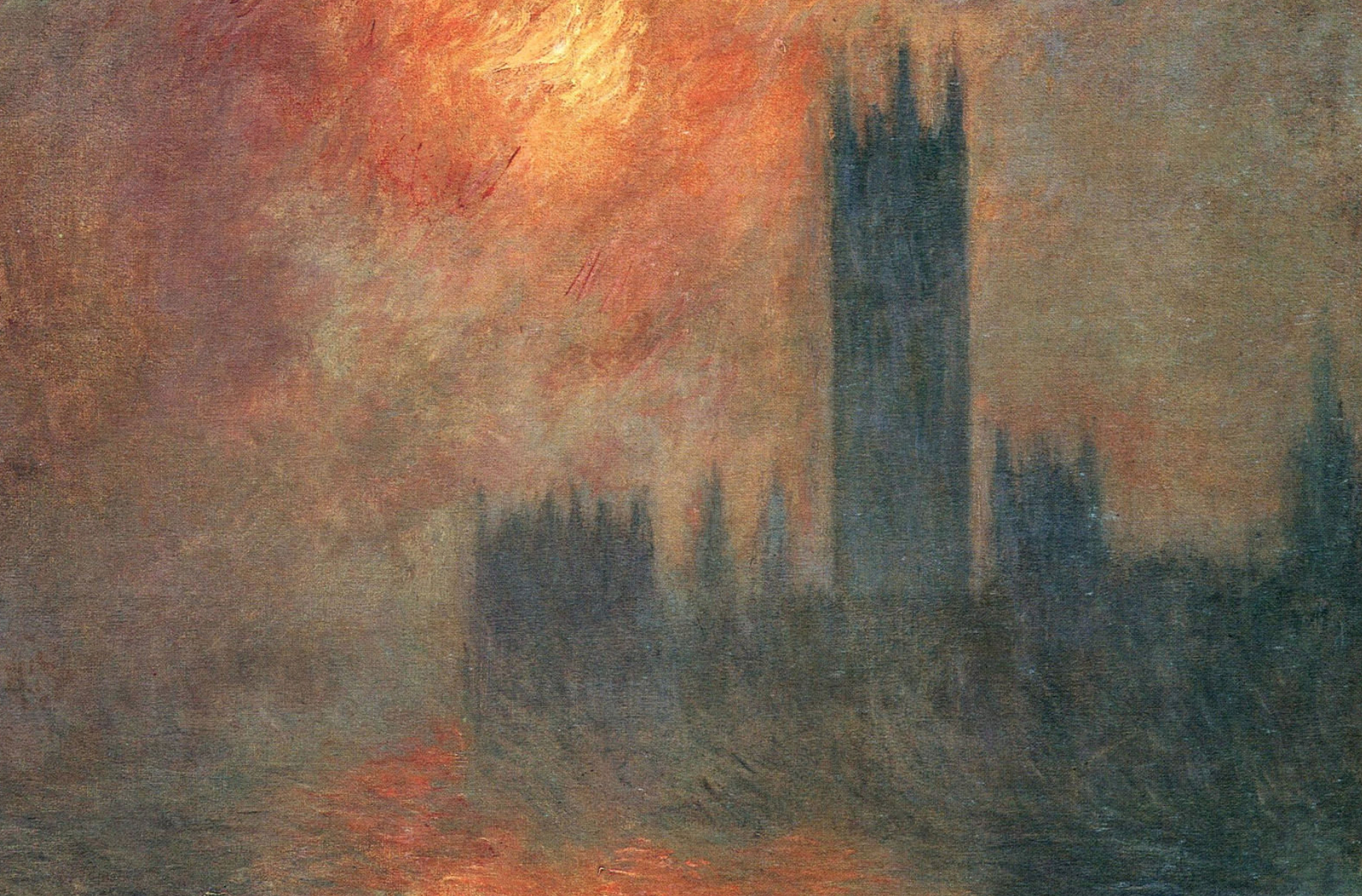 It's that time of year again when nations release their updated climate pollution inventories. This is when climate promises get measured against actions.

In my previous article, I dug into Canada's newly released inventory for 2017. It showed our emissions heading in the wrong direction and identified surging pollution from the oil and gas industry as the culprit.

In this article, I'm broadening the perspective to compare Canada with one of our Commonwealth peers, the United Kingdom. The U.K. shows how much more can be done in the climate fight. And, just as critically, the U.K. experience reveals just how large the task ahead has become, if we hope to avoid a full-blown climate crisis.

So, with the U.K.'s latest inventory report in hand, let's jump in.

How much more can be done

My first chart shows Canadian and U.K. climate targets through 2030. To make comparisons easy I've shown all targets relative to 1990 emission levels. As you can see, the U.K. has consistently promised much deeper climate pollution cuts (blue bullseyes) than Canada (red bullseyes). And you can also see that the ambition gap has grown larger over time.

This chart also let's you compare what Canada and the U.K. actually did with their emissions. The blue line shows the U.K. cutting emissions as promised. Their annual emissions are now 41 per cent lower than in 1990. In fact, they now emit less than they did in 1890. That's not a typo. And, yeah, they burned a lot of coal back then, what with inventing the steam engine and kickstarting the industrial revolution and all.

In contrast, the red line shows that Canada has increased our climate pollution, not reduced it as promised. Sadly, we haven’t come anywhere close to meeting any of our targets. Instead, even as the climate crisis has intensified over the last two decades, we've allowed our emissions levels to remain extremely high. Our latest inventory says we are polluting 19 per cent more than we did thirty years ago when we first promised to start cutting our emissions.

The U.K. shows that meeting climate targets is certainly possible.

The U.K. has done much more than Canada to fight climate change. @bsaxifrage charts what Canada can learn from their "carbon budget law."

Having a plan helps

So far, we've looked at past emissions. What about going forward?

I've added each government's most recent emissions projections to the chart. These projections reach to 2030 and include all currently enacted policies.

As the dotted red line reveals, Canada's existing policies will lead to continuing climate failure. The current federal government has promised to enact additional climate policies. Sadly, though, what they have proposed is still far too weak to meet our targets. And the size of the gap between proposed policies and our targets is growing wider. At this point Canada literally hasn't put forward a plan for climate success.

In contrast, the U.K. passed a "Carbon Budget" law a decade ago that requires it to create plans to meet its targets. And, critically, the government is legally required to enact all the needed policies into law many years in advance. Furthermore, to make sure they stay on track, the law covers all emissions in all years — not just a single target year far the future.

The U.K. results show that creating a plan that meets targets, and then implementing it well in advance, has been a successful strategy.

So far, we've compared relative changes in pollution levels. Next, let's compare the actual megatonnes emitted by the U.K. and Canada. 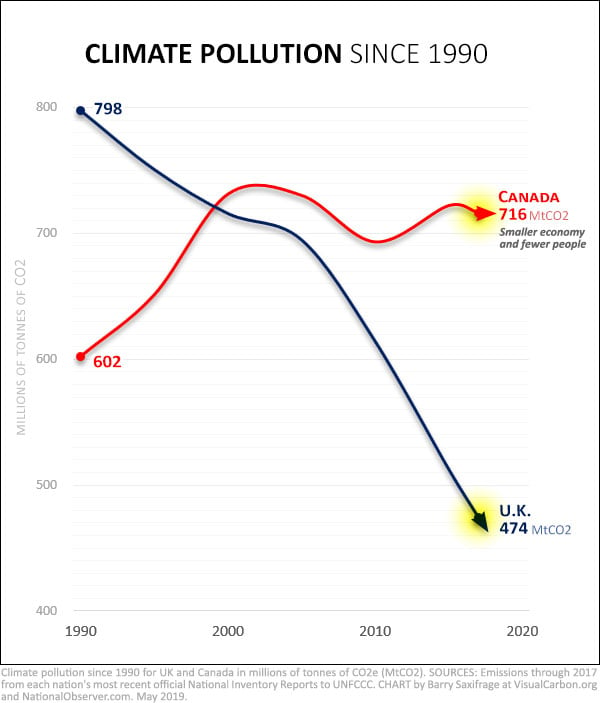 Back in 1990, the U.K. emitted far more than Canada — two hundred million tonnes more (200 MtCO2). That's not surprising, given that the U.K. has a much larger economy and a much bigger population.

Now, Canada is polluting hundreds of millions of tonnes more than the U.K. even though we have a smaller economy and fewer people.

The primary cause has been the rapid expansion of the oil and gas industry. Oil and gas pollution in Canada surged upwards by 90 MtCO2, accounting for the vast majority of the nation's emissions rise.

Rapid expansion of this industry continues to be a primary goal of the federal and provincial governments. As a result, they project pollution from the oil and gas industry will rise to 41 per cent of the nation's entire Paris climate target by 2030. Already, it pollutes far in excess of the country’s 2050 climate target. 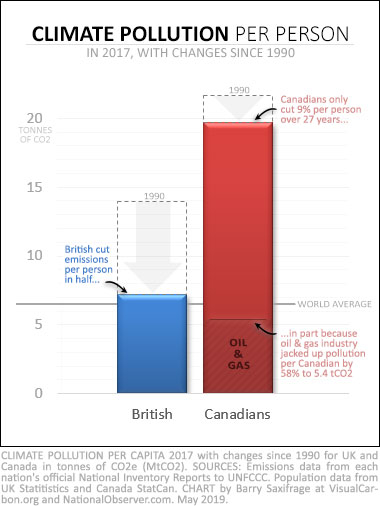 As a final comparison, let's take a look at the levels of climate pollution per person.

The Brits have cut their emissions per capita in half since 1990. They've dropped from 14 tonnes (tCO2) per person down to seven. That's getting close to the global average.

Canadians, in contrast, have cut far less. Our pollution per capita only fell from 22 tCO2 to 20 tCO2. We currently pollute triple the global average. At the rate we are cleaning up, we'll arrive at safe climate pollution levels centuries too late.

This chart also lets you see that oil and gas industry pollution has now risen above five tonnes per Canadian. At these rates, it won't take long for the carbon footprint from this one small slice of our economy to exceed the entire British and world averages.

And yet, the U.K. still isn't doing nearly enough

We saw above that the U.K. has managed to cut emissions to meet its climate targets. Their results provide a valuable benchmark that Canadians can use when measuring our past efforts and deciding how ambitious to be in the future.

However, the U.K. also provides us with another valuable lesson in the climate fight. And that is that even they still aren't doing nearly enough.

You don't have to take my word for it. You can listen to a teenager lay it out, instead. That's exactly what the U.K. parliament did last month when they invited the Nobel-prize-nominated, school-striker, Greta Thunberg, to address them. She didn't mince words:

…You lied to us. You gave us false hope … perhaps the most dangerous misconception about the climate crisis is that we have to “lower” our emissions. Because that is far from enough. Our emissions have to stop if we are to stay below 1.5-2C of warming … And by “stop” I mean net zero – and then quickly on to negative figures. That rules out most of today’s politics.

The fact that we are speaking of “lowering” instead of “stopping” emissions is perhaps the greatest force behind the continuing business as usual. The U.K.’s active current support of new exploitation of fossil fuels – for example, the U.K. shale gas fracking industry, the expansion of its North Sea oil and gas fields, the expansion of airports as well as the planning permission for a brand new coal mine – is beyond absurd.

This ongoing irresponsible behaviour will no doubt be remembered in history as one of the greatest failures of humankind.

... You don’t listen to the science because you are only interested in solutions that will enable you to carry on like before. Like now. And those answers don’t exist any more. Because you did not act in time.

It's not just millions of school-striking kids insisting that the U.K.'s reductions aren't fast enough.

For ten straight days this April, a group called "Extinction Rebellion" took to the streets of central London to shut down access to major bridges, city squares and financial buildings. They even stripped down and glued themselves to balcony glass in Parliament. Over a thousand people chose to be peacefully arrested in order to emphasize the urgency of their message.

Their top two climate demands are first to declare a climate emergency, and then to cut emissions to "net zero" by 2025.

They've already been successful on the first demand. After the London protests and Greta's speech, the U.K. parliament did vote to declare a "climate emergency." In doing so, they became the first nation to join a rapidly growing list of cities and regional governments. A few days later, Ireland became the second.

The U.K. also took a big step towards a "net zero" goal. The government’s Committee on Climate Change recommended adopting a "net zero" target for 2050. The committee concluded that "net zero" emissions by 2050 was required, feasible and affordable.

Climate damages are starting to pile up. The world's safe carbon budget is running out. And the younger generations have started fighting in earnest to save themselves.

Canada, with higher emissions, a dirtier economy and a larger carbon footprint, is far more exposed to these risks. Maybe it’s time to adopt the U.K. approach and start cutting emissions in earnest.

Thank you, once again, Barry

Appreciate hearing that. Thanks.

Good charts; however, there

Good charts; however, there is nothing I see that tells a lay guy like me what has been cut out to achieve the reduction. Figures, percentages etc can all be used to display a good graph - still no words that tell us how the reduction has been accomplished.

Emissions are down in every

Emissions are down in every UK sector -- and in the vast-majority of sub-sectors they list in their report. Many are down by more than 50%. The specific list of things the UK has done to achieve this is far more than would fit in an article, and many are specific to UK situation. Their inventory report is over 550 pages long.

The main thing Canada could learn from the UK, in my view, is to adopt their legal framework for acting on climate -- the Carbon Budget law. That is a framework that would ensure that Canada creates the needed Canada-specific solutions in a timely way.

Thank you, Barry Saxifrage, for once again providing illuminating charts. I did have the same question as John, though: How did they do it? The legal framework (a Carbon Budget), that's important to instill discipline, for sure. But can you tell us a bit more? or provide some references? That would be very much appreciated.

I can tell you how they have

I can tell you how they have been reduced. Solar and wind power galore. Carbon taxes. High prices at the pumps encouraging people to take Reliable and frequent PUBLIC transit or buy small vehicles. Renewable energy incentives to shift homes to solar. National Bus and Rail service so people can affordably travel using public transit. Buses converted to hybrid electric, tree planting. Government regulations and limits on election interference by big oil and gas lobby groups. Infrastructure and communities designed so that people have access locally, often within walking distance to things like grocery stores. Basically, everything Canada has not done because North America is too busy making a few people extremely rich.