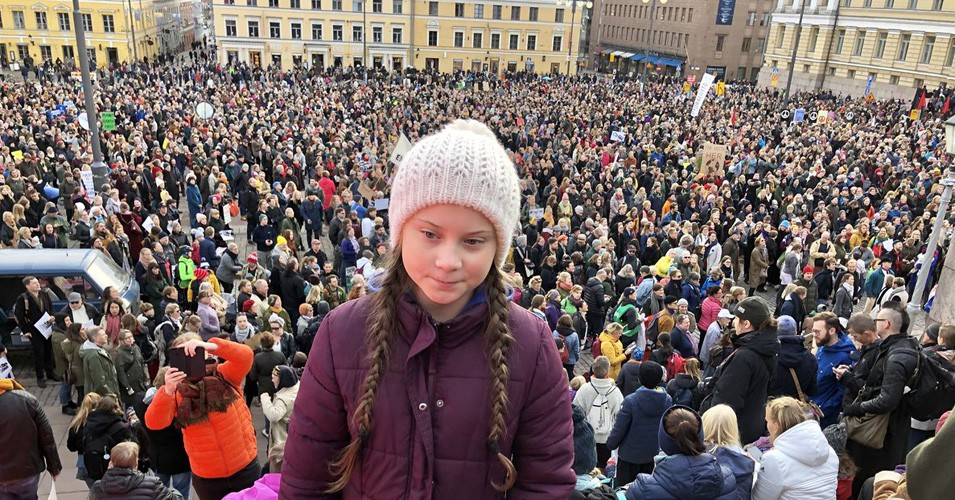 Photo of Greta Thunberg from twitter
Previous story
Next story

A Swedish teenager goes from country to country in Europe, aiming salvos of scientific truth about climate crisis at the world’s recalcitrant political and corporate leaders, most of whom are working very hard to pretend that there is no global climate crisis.

There is a broad and trenchant symbolism embedded in her words and actions, that reaches into the very soul of humanity.

Greta Thunberg is a teenager passing through one of the most vulnerable and turbulent periods of the human life cycle, developing a sense of her own personhood and trying to make sense of the world around her. She is also a person sensitive to the world around her in a different way from a majority of her family and friends, because of Asperger’s syndrome.

Thunberg became so overwhelmed when she learned several years ago about the massive implications of the climate crisis that she fell into a depression and stopped going to school. Her parents, acting out of devoted and intelligent love, suspended their careers and stayed at home with her in order to address her needs, helping her regain her equilibrium and then identify a path that she could follow in her daily life.

Why Thunberg speaks for and to all of us

I have practiced insight-oriented psychotherapy in a small-town primary care setting for over 40 years, based loosely on an approach developed at Harvard decades ago. “Talk therapy” is now considered, by many in my profession, as an “old-fashioned” kind of intervention; you talk with somebody in depth, asking probing questions and listening carefully to answers, delving into deeply personal issues and events — the kind that profoundly shape our lives — in an effort to ease suffering and more importantly, to enhance a person’s sense of self-mastery and agency. It is a process in which the therapist has to become invested, emotionally and intellectually, in understanding what is happening in the mind and body of a patient/client, and work with him or her to find better ways of dealing with major life issues.

In this approach to trying to resolve mental, emotional and a spiritual distress, pharmaceutical agents from the drug industry have been minor adjuncts only, useful for a very narrow set of specific indications. (Psychopharmacologic therapy has, in any case, been recently called into serious question.)

Decades of this clinical practice has helped to make me acutely aware of my own failings and vulnerabilities, as well as virtues and strengths. Most importantly, it has shown me, with crystal clarity, that ultimately we are all fundamentally the same. No matter what our belief system, our cultural roots, our sexual orientation, or our racial background, we face an essentially equivalent life trajectory, from birth through infancy, adult years, old age and death. We suffer when we are attacked and marginalized, and rejoice when we are appreciated.

And when those around us also feel loved and appreciated, our well-being is deepened and amplified.

When Greta Thunberg calls out to us — to all of us, of course, but especially to our leaders — she is speaking to something deep inside every person. She is speaking to that part of us that wants happiness for ourselves, but also wants it for everyone else around us.

Every tradition has held this principle of collective well-being as indispensable key to happiness.

Newborn babies are instantly and profoundly disturbed when witness to unwarranted aggression, either towards themselves or between others in their presence. In a similarly intense way, they are enthralled and delighted by cheerful and loving interactions between themselves and others, and among the people around them. These responses are not learned; they are inherent in us. They are, if you like, an internalized moral compass, built into our fundamental nature, and present in every child born everywhere.

Another undeniable characteristic of newborn babies is their utter dependency on those around them for survival. To a greater or lesser degree, we retain some of that dependency throughout our entire lives.

Without the support of our families, or our friends, or our neighbours, our lives are in unmistakable jeopardy. And that dependency on the support of others extends far more broadly than to our personal circle. Most of us don’t grow our own food, or deliver water, energy or fuels or a variety of other resources to our homes; we depend on established social structures and services to do that for us. Most of us don’t defend ourselves against the violence of others, beyond a brief moment or two; we rely on police and others to ensure that our basic physical integrity is respected. We don’t personally punish those who offend or harm us, but rely on others to do this on our behalf, following principles that civil society deems acceptable.

We also derive enormous satisfaction from acting in a supportive manner towards those around us. The volunteer, non-profit sector is today one of the fastest growing segments of human society, fuelled as it is by a deep instinct to do good in the world.

We are thus enmeshed in a web of social connections and interactions, from the beginning to the end of our lives. If that web fails us, or rejects us, in many respects our lives come to a painful and often harrowing end.

But we are also embedded in a far grander and more critically important web of connections and interactions than that.

When nature speaks, we have no choice but to listen

Our relationship to the laws of the natural world around us is simple: we can explore them, analyze them carefully, and work in concert with them, described with particular reference to living beings as “biomimicry,” or perish. We are inextricably wedded to this rich and bountiful planetary ecosystem, filled with its enormous array of landforms and life-forms, enriched with oxygenated air, large amounts of water, and land that is incredibly diverse in both structure and function.

If we acknowledge, respect and honour what has been given to us by a bountiful universe, then our lives can potentially contain unlimited fulfillment and joy. But if we persist mindlessly in our current behaviour, taking these gifts and exploiting them in narrow, divisive and destructive ways, then we will pay an appalling price for our error.

We can ignore what Greta Thunberg is saying about the coming climate crisis. Some pretend that her words have no relevance, and dismiss her as an aberrant youngster espousing farfetched and extravagant ideas. That’s certainly the perspective coming from the corporate world, and from many “pragmatic” politicians. It’s also coming from people who are nostalgic for a world that no longer exists – a world in which humans are benign passengers on Spaceship Earth, without any real impact on the cosmic vessel that carries us.

I believe this position is dead wrong.

Greta speaks with our voice

First, I believe that Thunberg is a gifted individual, endowed with a preternatural capacity for unflinching insight and attuned to some of the most profound realities of our time. She has discerned, more clearly than most, some crucial flaws in the direction in which humanity is now heading, and the critical necessity of changing course.

But second, she is also a teenager. What happens in any part of the world affects her home, and ultimately, affects all of us. So in a very real way, she is “our” teenager, dealing with the tumult and wide internal fluctuations that all of us manifested during our own adolescence.

If we ignore, neglect or marginalize her, we are symbolically doing the same to every young person who stands up and enunciates truths, especially when those truths are firmly articulated by the Intergovernmental Panel on Climate Change. If we negate Thunberg, we negate one of our most sophisticated and independent systems for understanding the world and communicating our best insights about it.

Such a negative response is particularly heinous when we all know that this young person will be alive long after most of the dominant figures in the corporate and regulatory sector will be dead, and thus will have to deal tomorrow with the results of their inaction.

In my view, we need to take the concerns of youth like Thunberg seriously, take their words into our hearts and minds, and then broadly and firmly act on them. Our common humanity depends upon it.

Thank you Warren - your

Thank you Warren - your profound insights have touched me deeply. The climate crisis needs to be understood by everyone as an opportunity for the human race to acknowledge its inter-dependence with Nature and set politics aside and tackle this greatest ever threat to our survival. Greta and all the children of the world need to have a future they can believe in.

Yes. Thank you Warren. One

Yes. Thank you Warren. One hopes this article is widely read and we can all act on Greta's call with determination, courage and compassion.

Thirty years ago, as I was

Thirty years ago, as I was slathering her with sunscreen in preparation for going to kindergarten, my daughter asked me why all the stories I told her about family outings when I was young were around water: lakes, rivers, creeks. I replied that all the outings involved food, and berry picking or fishing. Back then, people didn't use throw-away everything, so there was need of water for washing up, as well as for cooking and drinking.
She looked at me in astonished silence, and then asked, "You mean then it was safe to *drink* water that didn't come from a tap?"
My heart broke that day, to realize what the post-war governments and industries had done to us all, and our world.
It's only gotten worse.
What I would *really* like is to hear our PM explain new pipelines to Greta Thunberg. I've asked, and not got a reply. I don't think anyone believes the rationale he's offered.
There is no excuse for the appalling lack of government leadership. Talk is cheap: it's long past time for action.

It's so great to have your

It's so great to have your voice and insights back on the site, Warren.

From a mind that has

From a mind that has limitations to communication that the neurotypical do not, FINALLY a climate campaigner that seems to understand it's actions that speak louder than words. Her campaign stuck to the lowest-carbon-emitting transportation available, the train.

Perhaps if confronted by a pipeline question, she would say "if you stop buying it, they'll stop building infrastructure to sell it to you".

I'm so sick of climate campaigners that fly to their protests and speeches. They're just contemptible, and so embarrassing.