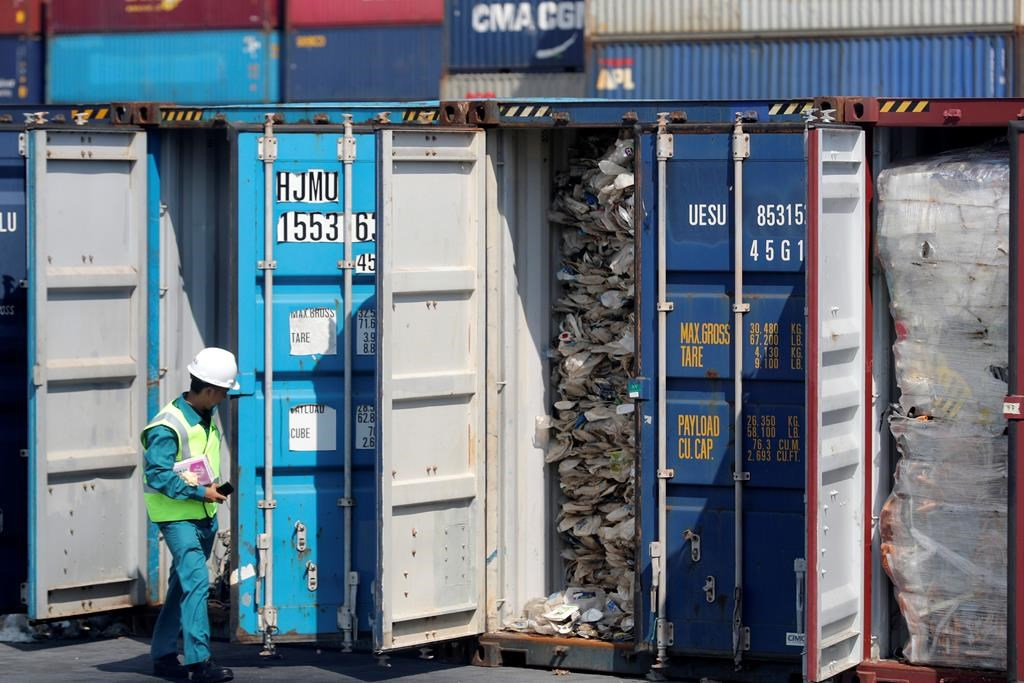 A Malaysian official inspects a container filled with plastic waste shipment prior to sending it to the Westport in Port Klang, Malaysia on May 28, 2019. Photo by The Associated Press/Vincent Thian
Previous story
Next story

The federal government has issued no permits for Canadian companies to ship trash overseas since regulations changed three years ago but Canadian garbage is still showing up unwanted in Asian nations.

Canada introduced new regulations in 2016 requiring exporters to get permits to ship waste other countries would consider hazardous, including trash. The changes were the result of the diplomatic dustup with the Philippines over 103 containers of trash that arrived in ports there in 2013 and 2014 wrongly labelled as plastics for recycling.

The Liberals insist the changes will prevent another load of Canadian trash from hitting Asian ports but it appears they haven't entirely.

Malaysia this week is demanding Canada pay to take back a shipping container filled to bursting with plastic grocery bags and packaging the Malaysian government says is too contaminated to be recycled.

Environment Minister Catherine McKenna said the government is still investigating the Malaysian situation — though the green plastic Loblaws bag and made-in-Canada stamps on other packages in the container make it difficult to deny where the waste originated.

McKenna said there is clearly a "broader lesson" for the world in all of this.

She intends to unveil a strategy next month to get at the roots of the problem, including cutting down on the production and use of single-use plastics, putting more onus on producers of plastic to pay for the problem and improving recycling.

This latest garbage embarrassment is shining new light on what Greenpeace Canada calls the "myth of recycling."

"I think it is a shock to Canadians that we ship so much garbage overseas," said Sarah King, head of Greenpeace Canada's oceans and plastics campaign.

Environmental Defence program director Keith Brooks says most Canadians have no idea that after they dutifully drop their plastic packages and soda cans into blue bins, a lot of them still end up in landfills or burned in far-flung countries.

"The curtain has been pulled back or the wool's been pulled off our eyes and we now see that 'Oh my gosh this is totally not working the way that we thought it was working' and we are contributors to a big problem," he said. "We are a global pariah as a result of exporting our contaminated plastic to less-developed countries. It's shameful."

Statistics Canada reports the country exported 44,800 tonnes of plastic waste in 2018, much of it to the United States. Once waste goes to the U.S. it is not tracked to determine what happens to it in the end. Brooks said plastics that originate in Canada are often mixed with American waste and then shipped to Asia.

Greenpeace Canada also says the import data from the Malaysian government suggests Malaysia is documenting more waste-plastic imports from Canada than Statistics Canada is reporting as exports to Malaysia, raising doubt that Canada has any true understanding of what plastic waste is going out and where it is ending up.

Canada is not the only culprit. Canada's container was among 60 that Malaysia says were imported illegally from 14 different countries, including the United States, Japan, France, Australia and the United Kingdom. The Philippines has complained of illegal trash turning up from Australia and South Korea. Indonesia, Vietnam and Thailand have all reported an increase in global garbage dumps, as unscrupulous business owners try to get in on the $3-billion trash industry.

Both Malaysia and the Philippines are looking at their own importing businesses as part of the problem — companies that get paid to take plastics for recycling but then just dump them in landfills or burn them.

The issue has become particularly bad since China, once the world's largest importer of recycling plastics, slammed its doors to the materials last year. China found it was disposing more than it was recycling because the materials arriving in its ports were often too contaminated with food waste and non-recyclables to be useful.

Greenpeace Canada says the countries sending trash also have a duty to investigate their side of the equation. King says Canada's Liberal government is talking a lot about the plastics problem but thus far hasn't actually done anything about it.

Canadians produce 3.25 million tonnes of plastic waste each year. Less than 10 per cent of the plastics Canadian toss out are diverted from landfills, and not all of what is diverted is actually recycled.

King says there is just no way Canada can absorb the amount of plastic waste its people produce, and the idea that the material should be burned or recycled is missing the mark. Burning waste for energy comes with its own host of environmental problems, namely air, soil and water pollution, while recycling is just not working.

King said Canada needs to ban the plastics that are the hardest to recycle — bags and heavy takeout-food containers as a start — and work towards producing products that can be reused instead.

Canada hires firm to ship back garbage, will be done before end of June: McKenna