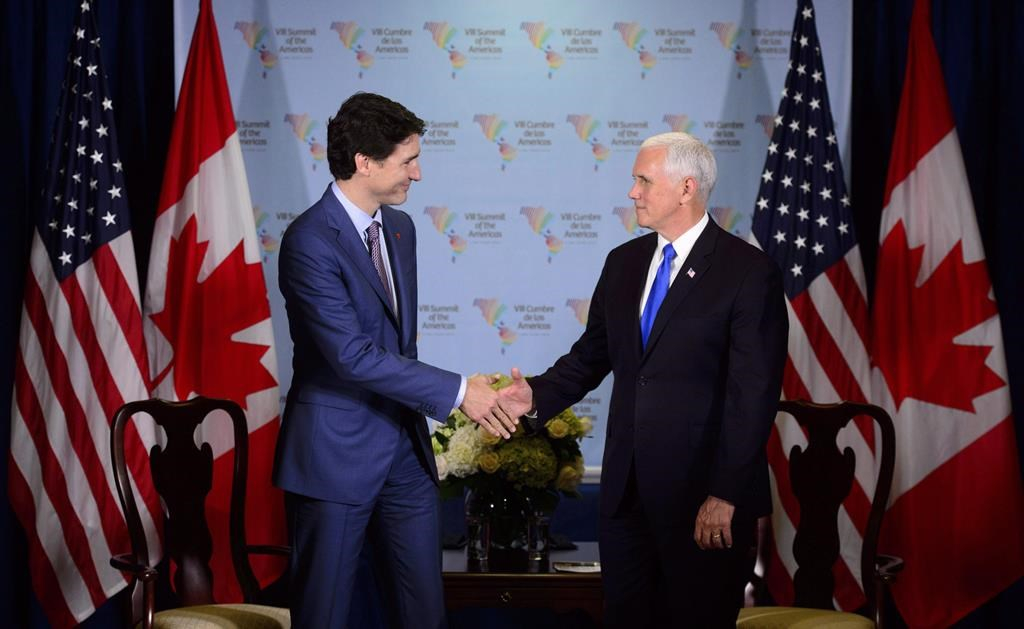 While Trudeau says he also wants to talk about what he calls the backsliding of women's rights in the U.S. with Pence, a well-known opponent of abortion, other international issues — including Canada's diplomatic battle with China — will also be up for discussion.

Trade will dominate their initial discussion, and while their focus will be on the pending ratification of the new continental trade pact, other remaining irritants will also be on the agenda, said a senior government official speaking on the condition of anonymity because they were not authorized to speak on the record about the talks.

The ongoing softwood lumber dispute and future U.S. plans for tariffs on uranium imports, which would have a big impact if they applied to Canada, will also be raised, the official said.

Pence and Trudeau will also discuss some larger, shared international concerns, including Canada's ongoing tension with China, which has detained two Canadians on unspecified national security violations, said the official.

Trudeau and Foreign Affairs Minister Chrystia Freeland have branded the arrests of Michael Kovrig and Michael Spavor as arbitrary. They were imprisoned in December after the RCMP arrested Huawei executive Meng Wanzhou on a U.S. extradition warrant.

Canada has been courting international support to pressure China to release Kovrig and Spavor, and the Trump administration has joined that chorus.

The crises in Venezuela and Ukraine will also be on the agenda, Freeland said last week in Quebec.

The divisive abortion question is now on the agenda after Trudeau said Wednesday he is concerned about how women's rights have been affected by conservative movements in Canada, in the U.S. and around the world. He said he will have a broad conversation with the vice-president.

Some states have recently passed anti-abortion laws, attempting to force the U.S. Supreme Court to reconsider its decision in the landmark 1973 Roe vs. Wade case that provides constitutional protection for a woman's right to choose.

While Trudeau and Pence are on opposite of the abortion debate, the vice-president is viewed in Ottawa as a reliable partner on the trade file.

Last week, Freeland said Pence has been "a strong and effective supporter of free trade. He has been someone who has spoken out in the United States about the value of NAFTA for both Canadians and Americans."

That contrasts with the Trudeau government's frequent labelling of the Trump administration as protectionist, especially during the long and sometimes bitter NAFTA renegotiation.

Trudeau is to meet Pence on Parliament Hill before they attend a luncheon with the Canadian Council for the United States-Mexico-Canada Agreement.

The Liberal government introduced its legislation to ratify the new trade deal on Wednesday.

Trudeau said earlier this week that Canada intends to align its ratification process with the time frame of the U.S. Congress.

Pence is also to take part in a wreath laying ceremony at the National Military Cemetery before returning to Washington.