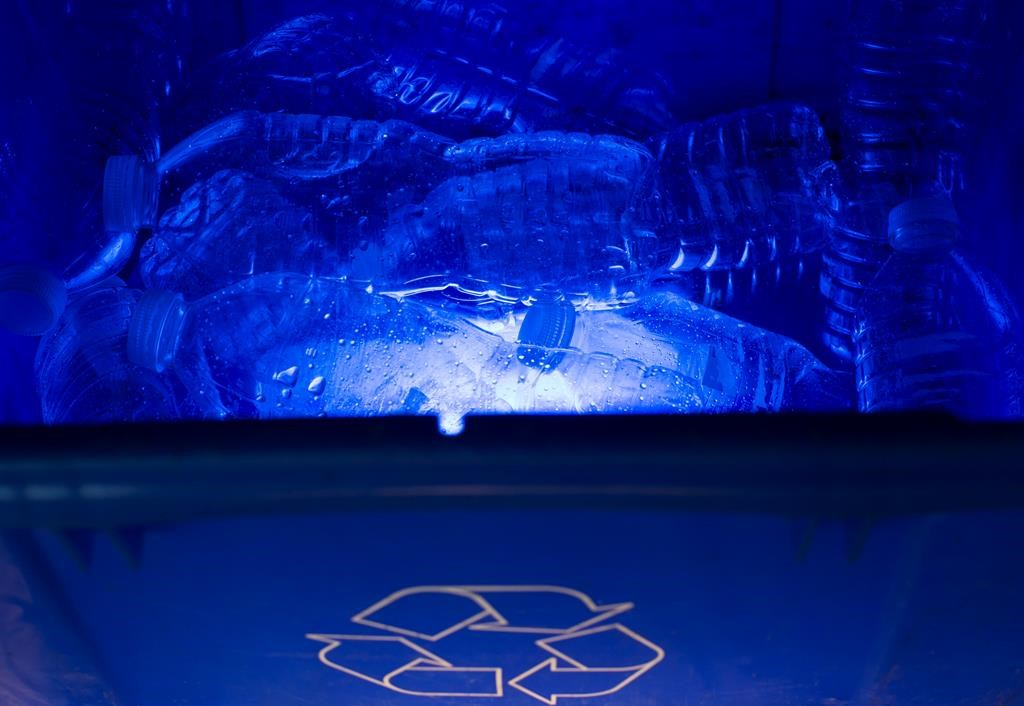 Plastic water bottles are pictured in a blue box recycle bin in North Vancouver, B.C., on Tuesday, May 7, 2019. File photo by The Canadian Press/Jonathan Hayward
Previous story
Next story

The report, completed by consulting firms Deloitte and ChemInfo Services, was commissioned by Environment and Climate Change Canada to guide its plan to cut the country's plastics waste to zero.

It found the plastics-manufacturing industry is a significant economic driver in Canada, worth $35 billion in sales of resins and plastic manufactured goods in 2017, and supporting about 93,000 jobs across more than 1,900 companies.

By comparison, there were fewer than a dozen recycling companies, employing about 500 people and generating about $350 million in revenue.

Generally, the analysis says, it is cheaper and easier to produce new plastic, use it and then throw it away than it is to recycle, reuse or repair it. The voluntary standards for contents of plastic products, and additives like glues and labels, mean there is a lack of consistency in the plastic materials available for recycling. That in turn makes them more expensive to recycle.

Canada also has very little demand for recycled plastic, which is why so much plastic has been shipped overseas. But the markets for recycled plastic are falling apart all over the world, leading shipments of Canadian plastics to be dumped in landfills or burn piles on foreign soil as well.

Environment Minister Catherine McKenna says Canada is throwing out billions of dollars of plastic every year and is working on a plan to have Canadians reuse or recycle all plastics or burn them for energy within 20 years. That plan is supposed to be unveiled this month.

The Deloitte report shows getting to zero plastic waste will require "radical changes" in consumer behaviour, an explosion in the number of recycling facilities in Canada, investments in recycling technology, and a litany of government policies such as landfill taxes or requiring products to include a certain proportion of recycled material. Requiring more recycled content would help create market demand in Canada for recycled plastic, regardless of the cost of new plastic.

The report suggests Canada could get to the point where 90 per cent of plastic avoids landfill by 2030 with an investment of between $4.3 billion and $8.6 billion, the addition of 167 new sorting and recycling facilities, a lot of government regulation and consumer willpower. That would increase revenues in the recycling industry from $500 million to $3 billion, and create 42,000 new direct and indirect jobs.

Sarah King, head of the oceans-and-plastic program for Greenpeace Canada, said the report is so focused on increasing recycling it avoids almost any discussion of cutting down how much plastic we use in the first place.

King said her fear is that Canada is not having the hard conversation about banning certain plastic products entirely — everything from plastic grocery bags and black garbage bags to plastic cups and take-out containers. Several municipalities in Canada are looking at such bans and the whole province of Prince Edward Island is set to ban plastic grocery bags on July 1.

King said the leadership has to come from Ottawa.

"Ultimately we want to move towards a ban on all non-essential plastics," she said.

Canadians produce so much plastic that recycling just can't handle the volume and "the only way to address an endless flowing tap is to turn it off," she said.

She also is concerned that Deloitte's zero-plastic-garbage outline includes burning one-fifth of plastic waste for energy. Burning facilities are less picky about what is in the plastic they are taking than recyclers are, which reduces the burden on consumers to properly sort their items and allows for a wider variety of items to be collected.

But King said, burning plastic produces ash and other toxic pollutants along with any energy.

If you burn plastic it is

If you burn plastic it is basically a fossil fuel--the stuff starts as less-volatile fractions of petroleum. It's just another case of burning oil, so yet another driver of climate change.
Greenpeace is right--we need reduction as much or more than recycling. Also other kinds of legislation--force the producers to simplify the number of kinds of plastic and make more of them recyclable or compostable (although apparently when you see plastic that calls itself "compostable", turns out it's not very compostable. I mean, if plastic is going to be single use, why does it need to be incredibly durable