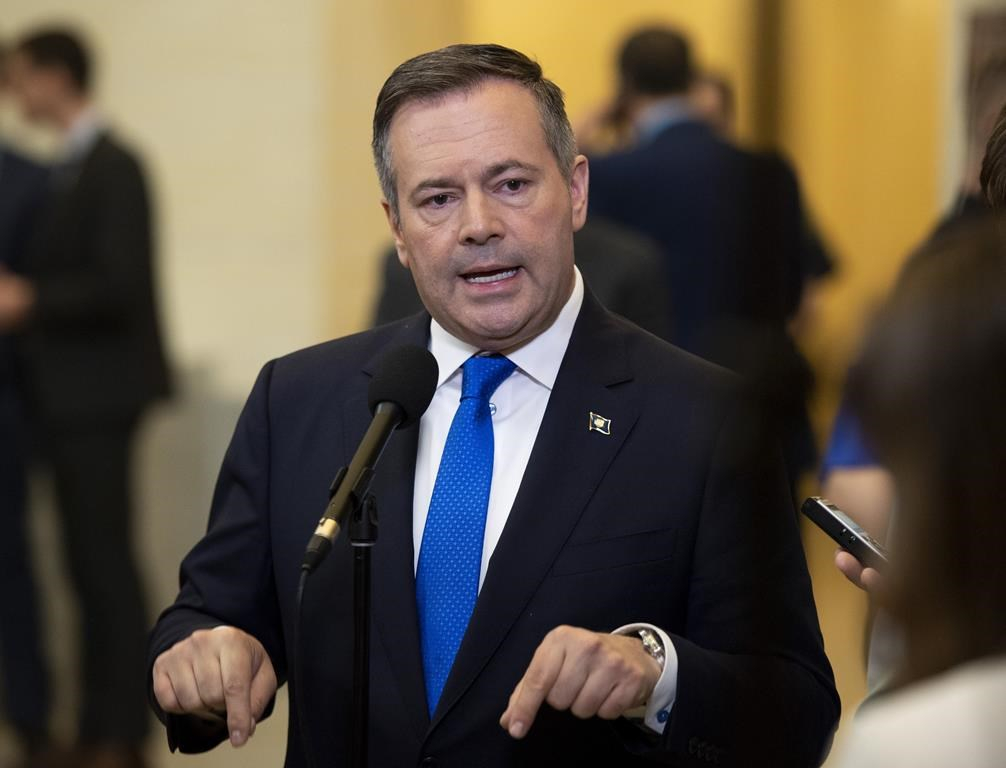 Alberta's premier says staff in the province's so-called energy "war room" will be able to quickly take on industry foes without government bureaucracy holding them back.

The office — to be based in Calgary with a $30 million budget — is meant to take on critics of Alberta's oil and gas industry in real time.

Jason Kenney and Energy Minister Sonya Savage were meeting with industry players on Friday to get advice on how the war room should work.

He said he hopes to have it up and running by the end of the summer and that it will be staffed by government employees and potentially contractors.

Kenney shrugged off the notion that the operation will only serve to galvanize the environmental groups it's meant to target, saying a defensive posture in the past hasn't worked.

He said it will be tough to gauge the war room's success, but one measure will be whether there is a shift in public opinion about Alberta's energy industry.

Kenney said with the 24-hour news cycle being a thing of the past, the war room will have to shed some of the usual shackles of government communications.

Taking hours or even days to approve a message won't cut it, he said.

"Government communications are by nature a little bureaucratic and tend to be a bit slow moving and risk averse," he said.

"The energy war room will have a mandate to operate much more nimbly and much more quickly with a higher risk tolerance, quite frankly, than is normally the case for government communications."

A war room leader has not been named yet.

"The energy war room will have a mandate to operate much more nimbly and much more quickly with a higher risk tolerance, quite frankly, than is normally the case for government communications," said @JKenney

"This is a recipe for disaster," he said.

Greenpeace Canada responded to Kenney's remarks by noting that attacking environmental organizations that raise concerns about the oil industry ignores the reality of climate change.

"Jason Kenney can spend $30 million on political theatre to try to distract us from the deadly seriousness of climate scientists’ warnings, but that won’t keep wildfires, heat waves or floods from getting worse or stop the seas from rising," Keith Stewart, senior energy strategist with Greenpeace Canada, said in a release.

"Shooting the messenger might make for great election campaign rhetoric, but ignoring inconvenient truths does nothing to prepare Alberta for the coming transition off of fossil fuels."

Kenney and Savage met with representatives of several industry and advocacy groups, including the Calgary Chamber of Commerce, Canada Action, The Canadian Association of Petroleum Producers and Energy Citizens.

From grandiose land despoilment, to species endangerment, to incredibly reckless water usage, to fracking induced earthquakes, to perpetually unreclaimed tailings lakes, to 'clean coal' and it's combustion resulting in gross corruption of air and land , to 'Western Canada Select' (dirty 'open pit' and 'SAG' produced heavy oil), to burgeoning climate change impacts (are you liking all these innumerable summer smoke days, Premier Kenney??), to climate induced beetle infestations of the forests of the west and species migrations,.....I'm missing MANY other calamities....if you have time I CAN name more. Good luck with your propaganda juggernaut UCP Alberta government of the day. You are GOING to fail.

Actually, the head honcho has been named but the government is slow to release it; a Mr J. Goebbals.