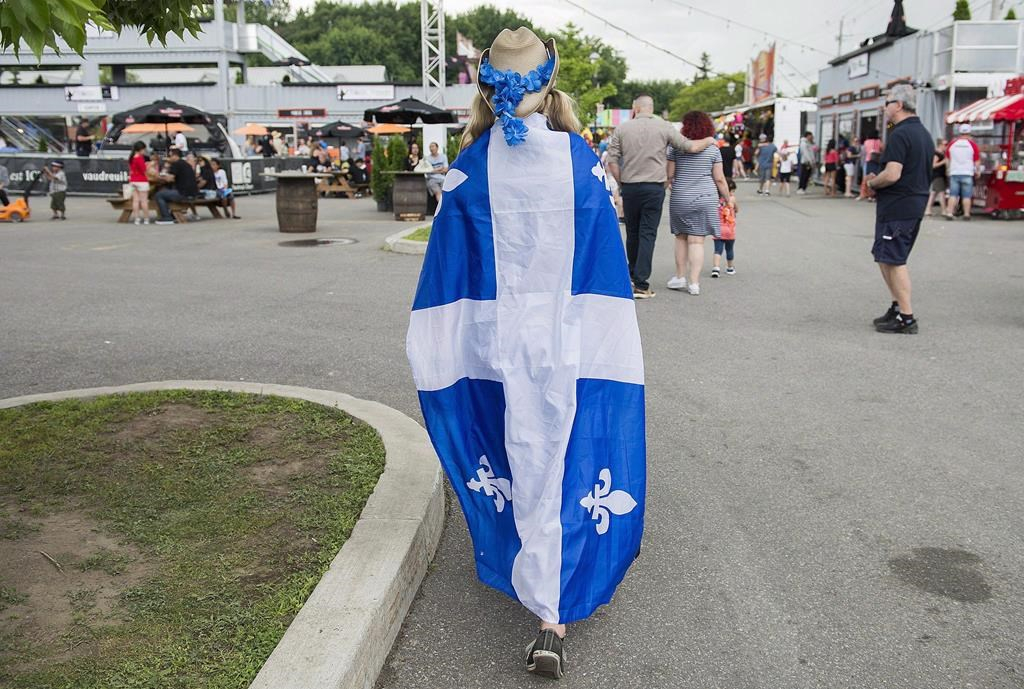 A woman is draped in a Quebec flag as she attends a Saint-Jean Baptiste day celebration in a town west of Montreal, on Sunday, June 24, 2018. File photo by The Canadian Press/Graham Hughes
Previous story

The organizers of the first Festival du Solstice — a three-day celebration that was to take place on the Fete nationale weekend and have the province's main holiday as its central theme — has reverted to what it's always been known as, following a brouhaha over the name change.

St-Jean-Baptiste Day used to be a politically tinged celebration tied to the province's independence movement. These days it's more of a holiday celebrating the history of Quebec and is officially known as Fete nationale.

"I spoke with the organizers of the Festival du Solstice and we agreed to return to the original name of the event, used in the past: St-Jean dans le Sud-Ouest," wrote Benoit Dorais, mayor of the southwestern Montreal borough, on Twitter. "We can't wait to celebrate Quebec's Fete nationale with everyone!"

Dorais said that organizers had initially adopted the name change with an eye to making the event sound more inclusive and unifying, and noted that Fete nationale festivities were already popular in the neighbourhood.

But word of the name change created an online storm that started in the Montreal mayor's office and spread right up to the premier in Quebec City.

Earlier Thursday, Mayor Valerie Plante called on organizers to add mention of the province's national holiday in their promotional material.

"If there is a moment to display, assert and not allow (the Fete nationale holiday) to fade away, this is it," she tweeted.

The material released on Monday for the June 22-24 event made no explicit mention of Quebec's national holiday. Plante said she believed it was a mistake made in good faith.

Quebec Premier Francois Legault also weighed in, saying the omission of Fete nationale from the name of the event showed a lack of judgment and that Quebecers should be proud of the holiday.

"What an error in judgment," Legault told reporters. "This is our national holiday, we are proud to be Quebecers, we are proud of our nation. Let's say it loud and clear: Happy Fete nationale."

"I've hosted Fete nationale festivities in Montreal for five years — with a lot of pride," Lepage said. "I am hurt and perplexed by the Sud-Ouest borough, who are rebranding it the Summer Solstice — because it goes on for three days? Call it the Fete nationale festival."

Protester who confronted Trudeau pleads not guilty to obstruction

Trudeau celebrates St-Jean-Baptiste day in Montreal with his family