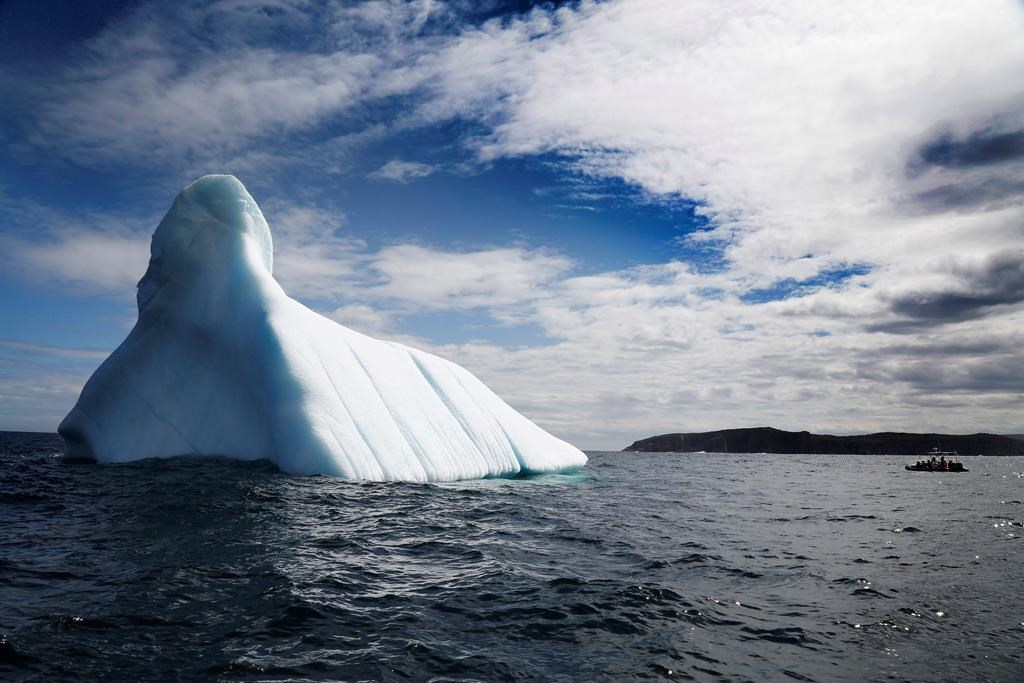 Instead of May flowers, late spring in Newfoundland and Labrador is known for the towering icebergs sent drifting down the province's coasts.

After separating — or "calving" — from glaciers in Greenland, these 10,000-year-old hunks of ice, with eye-catching colourations and textures, may soon melt down to nothing off the island's shores.

For many residents and tourists, the photogenic phenomenon is also a stark visual reminder of the planet's changing climate and rapidly melting glaciers.

Bob Bartlett, owner and operator of Trinity Eco-Tours, says he's detected an increase in iceberg tourism over the last few years as people rush to see the glacial giants up close before they are lost to climate change.

"There's been an increase in tourism based on the fact that people think icebergs are going away with global warming," Barlett said from a dock in Trinity after an afternoon tour.

"There's a perception, I think, that with global warming there will be no more icebergs."

Doug Leonard, a senior ice forecaster the Meteorological Service of Canada, said the annual number of icebergs visible from land depends on many factors independent from climate change, such as wind patterns. But increased calving from glaciers, where the icebergs begin their trek, is linked to the warming climate.

A statement from McKenna's department cited research from the Journal of Geophysical Research Centre that points to increased warming in the Canadian Arctic, sending "more thick multi-year sea ice" southward during the annual melt season.

The International Ice Patrol has assessed 2019 as an "extreme year" for icebergs on the east coast, in the top 10 per cent of years tracked, the department said.

As of June 11, 1,494 icebergs had drifted south into transatlantic shipping lanes south of 48 degrees north, compared to a yearly average of 713, classifying 2019 as the tenth most severe year on record since 1900.

For Bartlett's customers, these numbers and long ocean journeys are brought into focus from Trinity Eco-Tours' small boats, as people look up at a tall mass of white and blue with streams of water running down its sides.

"It is a phenomenon and people are sincerely interested. I've had people cry on tour over these icebergs," Bartlett said of the "immersive experience" people seek from far and wide.

"This is live, it's happening now. And in a couple or three weeks, that iceberg may be done and finished."

Some tourists even come to escape the heat themselves.

Jim and Laura East were vacationing in Trinity from their home just south of Daytona Beach in Florida, saying they chose a cold vacation spot for a break from the hot temperatures back home.

"The only ice we see is in our drinks," Jim said cheerfully before boarding the vessel.

On Bartlett's tours, the up-close sight of a 'berg brings smiles to people's faces, but still, chatter on board naturally turns to rising sea levels, and the iceberg's impressive lifespan that's nearing its end.

Once one iceberg disappears, the chase to find the next one begins, Bartlett said, but there's still a melancholy aspect to seeing a hunk of ancient glacier at the end of its travels.

"We have this gigantic, mammoth iceberg that is actually in its last, dying stages as we watch it. So it's a bit of a sad moment, as well."