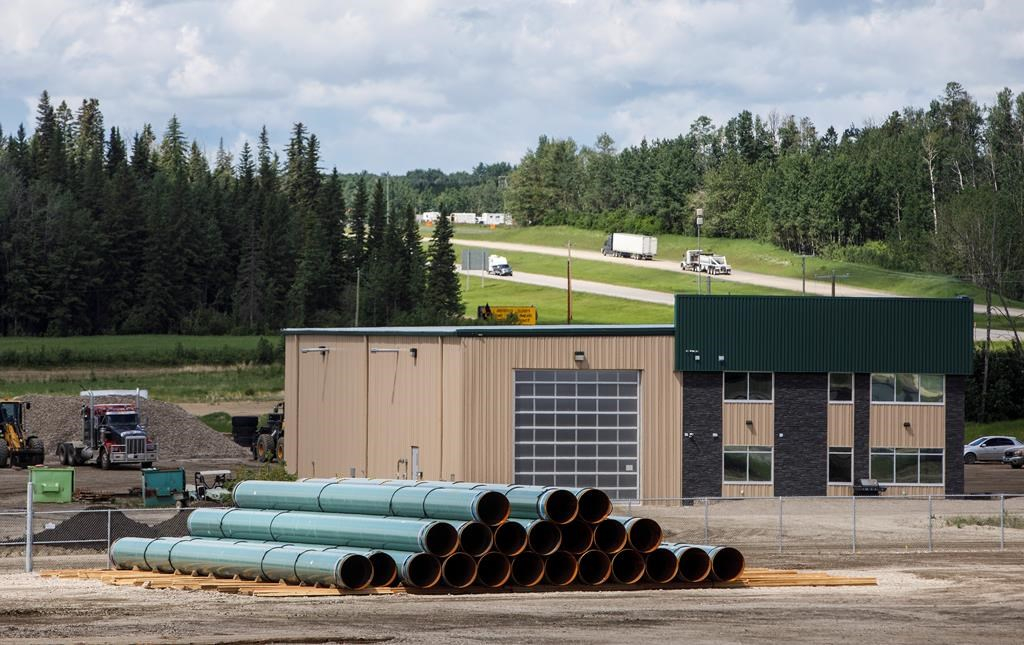 Pipe for the Trans Mountain pipeline is unloaded in Edson, Alta. on Tuesday, June 18, 2019. Photo by The Canadian Press/Jason Franson
Previous story

Ottawa's approval of the Trans Mountain pipeline expansion pleased business leaders on Tuesday but they say they will hold off on popping champagne corks until construction begins on new pipe from Edmonton to the West Coast.

"It was essential to show the world that our country can get major infrastructure projects approved," said CEO Tim McMillan of the Canadian Association of Petroleum Producers at an afternoon news conference.

"It is now essential we show the world we can get them built."

The approval of a project that will add about 600,000 barrels per day of potential oil export capacity is a rare bit of good news for the sector, said Jack Mintz, tax policy and economics expert at the University of Calgary's School of Public Policy, in an interview.

But while it would help clear a glut of oil in Alberta that has depressed local oil prices, it doesn't create any room for growth, nor is it likely to encourage financial markets to invest in Canadian oil and gas.

"I think the champagne corks will come out if there's a feeling there won't be legal challenges that can stop the pipeline from being built," he said. "There still is some concern about whether it will actually go ahead."

In his announcement on Tuesday, Prime Minister Justin Trudeau said work on the project that was interrupted last summer by a federal court ruling is expected to be restarted during the current construction season.

Numerous industry representatives vowed to hold the government to that timeline, with many expressing doubt that the oft-delayed pipeline first proposed in 2013 can get back on track so quickly.

"It's too early to celebrate this decision. I will be more optimistic after construction commences and is completed on TMX," said Gary Mar, CEO of the Petroleum Services Association of Canada, in an interview.

"It is important that construction restart immediately to create and maintain jobs and also ensure that Canada receives full value for its resources," said McKay in a statement.

The federal government's promise to ask Indigenous groups affected by the pipeline about selling a stake to First Nation investors won kudos from Little and Chris Bloomer, CEO of the Canadian Energy Pipeline Association, as well as one of the potential bidders.

"Right now, we're excited. We're happy with the response," said Chief Tony Alexis of the Alexis Nakota Sioux Nation near Edmonton, a leader of the Iron Coalition hoping to organize a coalition of Alberta Metis and First Nations to bid for an equity stake in the pipeline.

The Trans Mountain announcement failed to impress Mark Scholz, CEO of the Canadian Association of Oilwell Drilling Contractors, who said in a statement the pipeline approval is "trivial" and will do little to help a suffering western Canadian drilling sector.

Approval doesn't make up for the federal government's pursuit of Bills C-69 and C-48, bills reviled by the industry to revamp the regulatory system for resource projects and impose an oil tanker ban on the B.C. coast, he said.

"This industry is on life support. Today's announcement does little to provide future certainty to drilling and service rig contractors as they continue to exit the Canadian market at an alarming rate."