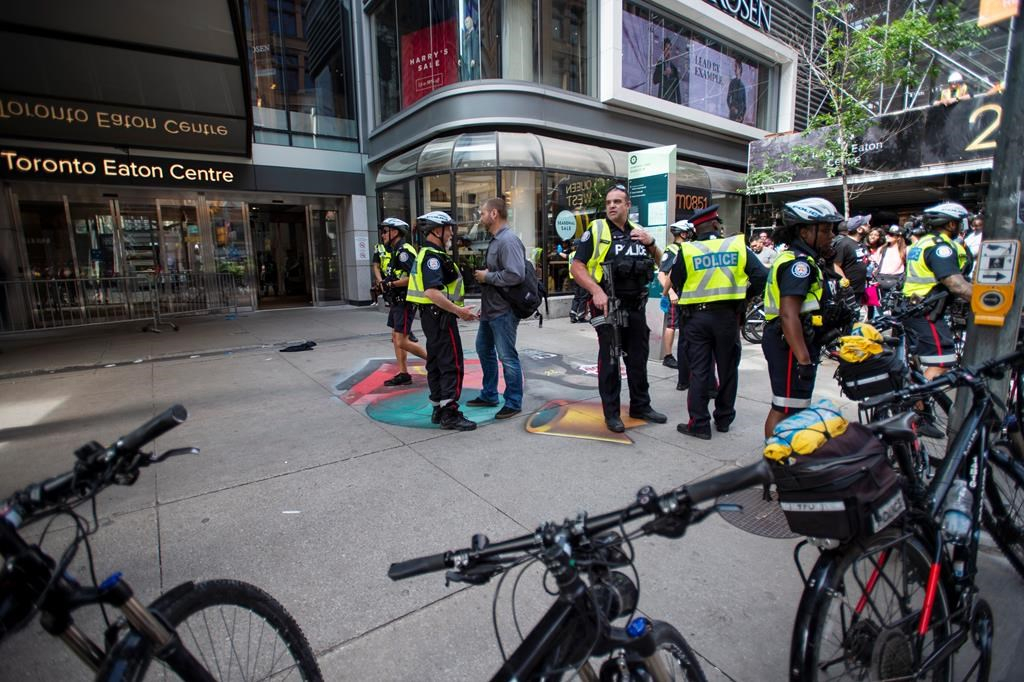 Toronto Police secure a crime scene after shots were fired during the 2019 Toronto Raptors Championship parade in Toronto, on Monday, June 17, 2019. File photo by The Canadian Press/Andrew Lahodynskyj
Previous story
Next story

Toronto police have released the identities of three men who were arrested after a shooting on Monday that sent part of the crowd scurrying for cover during a celebration for the Raptors' historic NBA win.

The men, who are all from Toronto and range in age from 18 to 25, face firearms-related charges.

Police have said they're still looking for a fourth suspect involved in the shooting, which left four people with injuries that are not thought to be life-threatening.

"Our hope is to get everybody that was involved in this incident to bring them before the judicial system, so we are not near where we want to be right now," Chief Mark Saunders said Tuesday.

"We are looking for a firearm that we know was definitely shot at that location."

Investigators allege that Shaquille Anthony Miller, 25, and Thaino Toussaint, 20, were carrying guns when they were arrested.

The men each face seven charges that include carrying a concealed weapon and — in Miller's case — assaulting a peace officer while carrying a weapon.

Police said Abdikarim Kerow, 18, was arrested on a previous warrant and faces a total of 20 charges, including two counts of possessing a loaded regulated firearm and possessing drugs for the purpose of trafficking.

Saunders said police are looking for a suspect described as a male with a heavy build, around five-foot-nine, short brown hair and wearing a white shirt. He also urged witnesses or anyone else with information on the shooting to come forward.

"You can't have two million people in that same space and say nobody saw anything," he said.

The shooting happened at 3:45 p.m. at Nathan Phillips Square, where over a million people had been waiting for hours to greet the new NBA champions at the end of a victory parade.

The team and several dignitaries, including Prime Minister Justin Trudeau and Ontario Premier Doug Ford, were on stage when the sound of gunfire sent dozens of panicked fans running for safety, grabbing friends and children as they fled. The ceremony wrapped up a short time later.

"We saw millions of people come out to celebrate our team and the championship," he said. "We saw the best of our city and then there was a scary moment where police acted immediately to deal with."