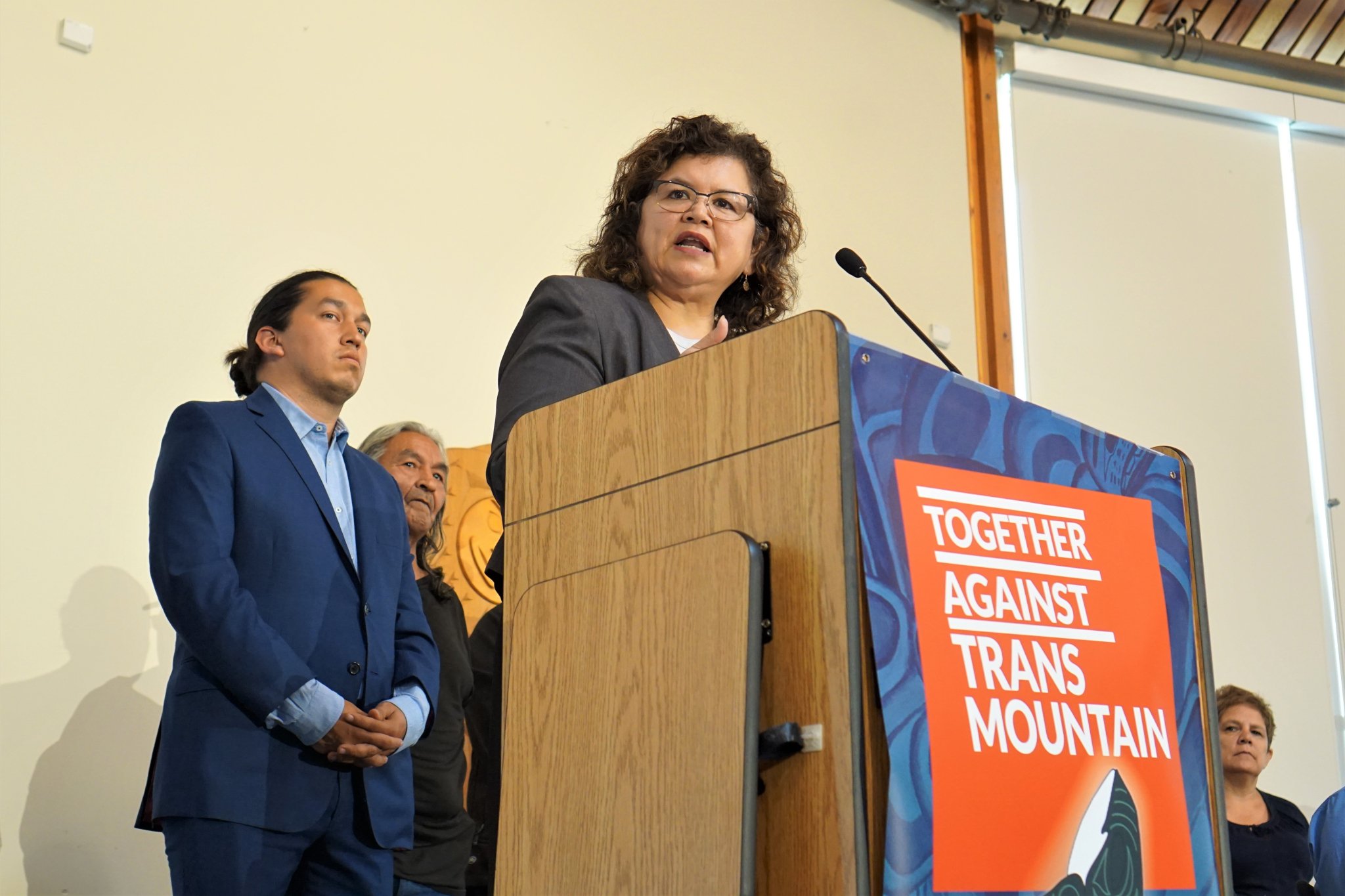 Chief Leah George-Wilson of the Tsleil-Waututh Nation was calm and sure-footed as she addressed a news conference on Tuesday. Not even two hours had passed since the prime minister announced the federal government’s approval of the Trans Mountain expansion project.

She already had the nation’s answer.

“We will be appealing this decision to the Federal Court of Appeal,” she said. “Tsleil-Waututh Nation continues to withhold our free, prior and informed consent, and are prepared to use all legal tools to ensure our government’s rights are respected.”

Khelsilem, spokesperson for the Squamish Nation, also said council will be using “all legal tools” available to challenge the decision.

Prime Minister Justin Trudeau’s government purchased the pipeline and expansion project for $4.5 billion. The expansion will triple the capacity of the existing pipeline system by building a new line that would increase oil tanker traffic from Trans Mountain in Burrard Inlet sevenfold.

Construction was paused in August 2018 after the Federal Court of Appeal ruled Canada's approval was based on a flawed environmental review and inadequate consultations with First Nations affected by the project. Squamish Nation and Tsleil-Waututh Nation were both on the winning side of the court challenge.

The government asked the National Energy Board to lead a second review of the project's impacts on marine life, which concluded earlier in 2019. Canada then consulted again with First Nations, leading up to Trudeau's announcement that he was re-approving the project on Tuesday.

Trudeau said the government learned from mistakes identified by the court last August and took steps to improve the consultation process.

But the Indigenous leaders at Tuesday’s conference say the government’s redo at consultation was as inadequate as the first round.

Khelsilem said the minister of natural resources, Amarjeet Sohi, told the Squamish Nation’s council in the fall there were no timelines for the consultation process, even though a deadline had in fact been set.

Tsleil-Waututh Nation and Squamish Nation will use "all legal tools" available to challenge TMX approval.

He also said the government failed to provide all information to council in time for that deadline.

"After that deadline, they provided us with more information that we were unable to even comment on because their self-imposed deadline had already passed," he said.

A senior official from Sohi’s office said a three-month period begins only after the National Energy Board files its report, for the federal cabinet to consider its findings. The board filed its report on Feb. 22, and the official says Sohi would not have known in the fall when that report would be filed, and whether the government would request any extensions.

The official said Khelsilem is correct that there is no limit to the extensions that cabinet can request, but that cabinet was satisfied with the amount of consultation.

On Wednesday, Trans Mountain CEO Ian Anderson said he anticipated seeing shovels in the ground by September, beginning a three-year construction period that would result in the pipeline going into service in 2022. He said Trans Mountain had its main contractors standing by and ready to get to work in the coming weeks.

"The project itself is a 30 to 34 months’ construction, once we get started, so getting started is the most critical thing and that's what we've been working hard at for several years now, is to get started and hopefully we can get started late this summer," Anderson said during a conference call with reporters on Wednesday afternoon.

Anderson said he spoke on Wednesday morning with the oil companies that have contracts to ship their petroleum products on the new pipeline and they remain excited and anxious about moving forward with the project.

"They are also bound by those contractual obligations, but above and beyond that, I believe they are emotionally and spiritually committed to the project, as well," Anderson said.

Reuben George, from Tsleil-Waututh Nation, said the nation has commissioned reports that show the pipeline is not in the public interest. This includes an independent environmental assessment and an economic study, which did cost-benefit analyses, estimating the expansion project will cost Canada $11.8 billion. The study predicts lower demand than the government has anticipated and unused capacity, as well as environmental costs.

Chief Dalton Silver of the Sumas First Nation said the NEB has imposed a condition on Trans Mountain whereby the Crown corporation must negotiate with the nation for access to its traditional territory, including a sacred burial site in Abbotsford.

"That condition has not been met," he said. "Should any equipment come onto that site, we'll be there to meet them."

Kukpi7 Judy Wilson, chief of the Neskonlith Indian Band, and Grand Chief Stewart Phillip, president of the Union of British Columbia Indian Chiefs, also voiced their opposition to the project. Phillip said he believes the decision “will breathe new life into the resistance.”

Vancouver’s mayor, Kennedy Stewart, attended the conference and said the decision to approve the pipeline is “unacceptable” from a reconciliation and environmental perspective.

Stewart was arrested for protesting the pipeline expansion last year when he was serving as member of Parliament for Burnaby South.

Premier John Horgan said he spoke with Trudeau before the decision and reiterated his concerns about the potential of a marine spill.

Asked whether he would support any lawsuits filed against the project, Horgan said he'd have to look at the substance of the applications.

"If it's in the interests of British Columbia to join them, we will," he said.

Horgan said his government is pursuing a reference case in the Supreme Court of Canada that asks whether B.C. has the power to restrict oil shipments through its territory. The B.C. Court of Appeal previously ruled against the government on the same question. .

Meanwhile, B.C. has been responsibly issuing permits as they have been requested, he said.

Several hundred protesters gathered Tuesday evening in downtown Vancouver, carrying signs that read "Justin the hypocrite" and "No jobs on a dead planet." Many pledged further action to block the project from being built.

"Our land is suffering. The water is suffering," Dakota Bear, a Cree hip-hop artist, told the crowd. "We must continue to fight. I hope you will join us."

Six-year-old Aria Greyeyes held a sign that read, "You've invested in the death and destruction of my future" on one side and "Expect my resistance" on the other.

Earlier in the day, protesters on either side of the debate clashed at a rally in the city organized by the project's supporters.

Rally attendees asked him to stop but Hamilton persisted. Vancouver police responded after a member of the crowd pushed Hamilton.

Afterwards, Hamilton said he interrupted the rally because he wants to defend the land along the B.C. coast where his Indigenous ancestors have lived for generations.

"I think shoving a pipeline through somewhere that's as pristine as B.C. is, it's the worst crapshoot you could ever take," he said.

Several First Nations spoke at the pro-pipeline rally, including Shane Gottfriedson of Project Reconciliation, an Indigenous-led coalition that hopes to buy 51 per cent of the expansion project.

"For many decades, a lot of First Nations have been a part of the oil and gas industry," Gottfriedson said. "This opportunity to buy the Trans Mountain pipeline is a one-time opportunity and we're hoping to make the best of it."

With files from Mike De Souza and The Canadian Press

We grateful settlers are

We grateful settlers are ready to double down and stand alongside any and all First Nations that are rightfully and courageously protecting their unceded territories. This pipe will forever remain nothing more than a wet dream of greedy vested interests.