Who should bear the financial risk of flooding? Report lays out three options 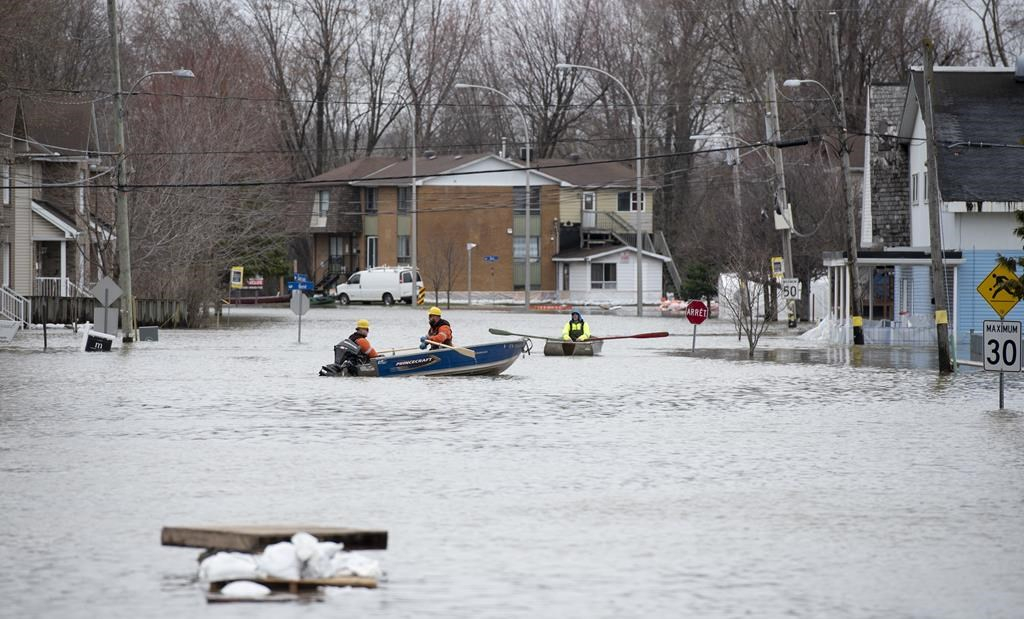 People use boats along Rue Saint-Louis in Gatineau, Que. as flooding from the Ottawa River continues to affect the region on Saturday, April 27, 2019. File photo by The Canadian Press/Justin Tang
Previous story
Next story

The federal government could help mitigate the cost of flood damage by creating a "high-risk" insurance pool to help lift the burden off the public purse, says a report released Tuesday by the Insurance Bureau of Canada.

The high-risk scheme is one of three options laid out in the report, a product of months of work by a national working group co-chaired by the bureau and Public Safety Canada.

About one-fifth of homes in Canada are considered to be at risk of overland flooding, but many don't have coverage for the damage. For those that do, insurance payouts have surged to about $1 billion per year over the past six years, based on estimates in the report.

Meanwhile, federal payouts to help communities recover from flood damage have quadrupled over the last four decades to about $3.7 billion during the first four years of this decade, compared with just $300 million during the 1970s.

"Taxpayers cannot continue bailing out people who live on floodplains," said Craig Stewart, a vice president at IBC and co-chair of the working group.

The three options laid out in the report include a pure market approach where risk is solely borne by homeowners, another where the government is more involved, and finally the creation of a high-risk pool of funds to help manage the financial risk.

The report suggested the high-risk scheme fares better than others at being affordable for homeowners, efficient at payouts, and accessible to homeowners — but the report stops short of making a recommendation on which option the country should follow.

The advantage of the high-risk scheme is that it allows insurers to pass on risks to a larger pool of available money fed by premiums from homeowners. If a homeowner makes a claim, the insurance company would pay out to the customer and then seek reimbursement from the pool.

Homeowners might not even know they're in the high-risk pool, Stewart said, but it would allow insurance companies to avoid some of the financial risk involved with insuring people whose homes may be flooded.

Premium costs would be based on the risk of flooding, Stewart said. If premiums are capped, the pool would need another source of money to make up the loss, he said, suggesting property taxes or insurance premiums might be options for both that stream of money and the pool's startup costs.

"For that to happen," Stewart said, "you need to have significant government investment in mitigation over those 25 years."

While the federal government has promised $2 billion for disaster preparedness, the report noted "ongoing funding" is needed, without putting a dollar figure to it. Stewart said the IBC is working with the Federation of Canadian Municipalities to figure out the cost to make Canada resilient to flooding, as well as other natural disasters.

More money from the government is one of several key factors the report says are needed to address flood risk.

Another is the possibility of moving people out of high-risk flood zones by paying them to relocate, the report said.

More immediately, improving the quality of data, such as mapping flood risk zones, is "the single greatest thing the federal government can do," Stewart said.

Better mapping is essential to help homeowners take action because many don't even know they live in high-risk flood zones, said Jason Thistlethwaite, an associate director of Partners for Action, a research network committed to reducing flood risk.

"If you are trying to encourage demand for this product, you first need to convince people that they need it," he said.

Solving issues like the lack of flood mapping data, poor public awareness and insufficient investment in risk mitigation are essential "preconditions" to creating a viable flood insurance system, said Thistlethwaite, who is also a professor at the University of Waterloo.

"It doesn't matter what type of flood insurance model you have — unless you have the right conditions in place, it isn't going to work," he said, adding that first and foremost means more aggressive investment and leadership from the federal government.

"The report is on flood insurance, but it's actually the government that needs to do most of the heavy lifting."