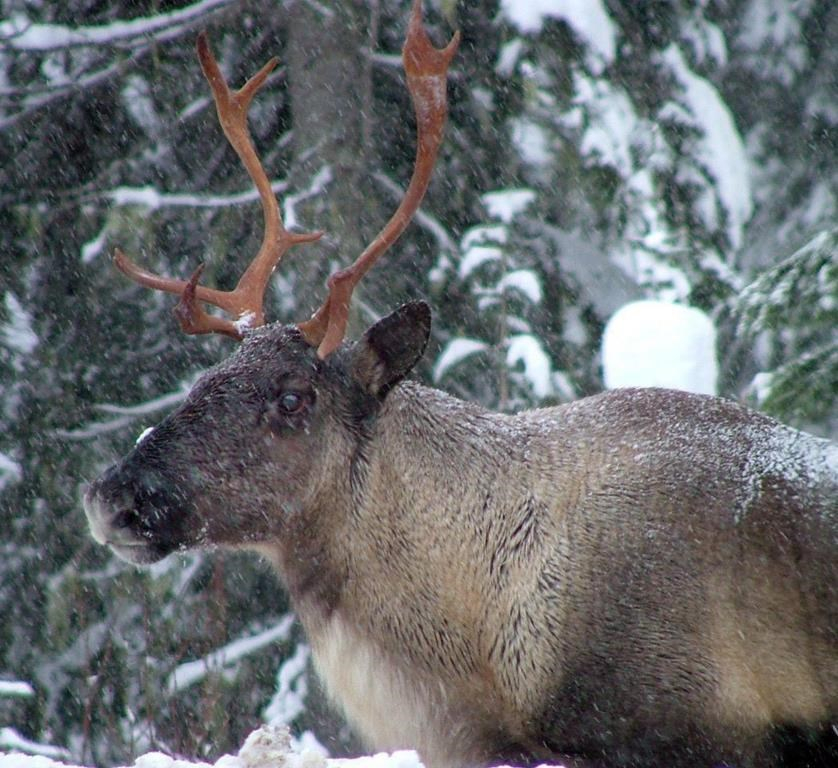 This photo shows part of the Southern Selkirk caribou herd moving north through the Selkirk Mountains about three miles north of the Washington state border into Canada, in Nov. 2005. File photo by The Associated Press/B.C. Forest Service/Garry Beaudry
Previous story

The British Columbia government announced an interim moratorium on resource development in parts of the south Peace region on Thursday, giving itself more time to sign a long-term strategy to protect dwindling caribou populations.

The government said it will close consultation gaps to find harmony within local communities that have been divided over the issue, while one of the area's First Nations called the move a stall tactic.

The issue of caribou protection had "inflamed passions," in what Premier John Horgan said in April was a lack of understanding about saving the animals.

Blair Lekstrom, a former Liberal MLA who was appointed the province's community liaison in April, said he's confident a balance can be reached.

"Caribou are everybody's issue," he said. "We need to find the balance so that our families and the workers and the resource industry workers are allowed to go to work and provide for their families. Do I think we can reach that balance? Yes I do."

The moratorium is one of 14 recommendations in a report by Lekstrom on caribou recovery released Thursday. It covers new forestry, mining and oil and gas developments.

The moratorium applies to the "central herd" area of the southern mountain caribou, which was first listed as threatened in 2003.

The government also unveiled a framework for a "bilateral conservation agreement," with the federal government, First Nations, local governments and industry to develop caribou management plans for the southern mountain caribou.

The move comes more than one year after federal Environment Minister Catherine McKenna determined that 10 southern mountain caribou herds faced an "imminent threat," setting the stage for Ottawa to issue a possible emergency order to protect them.

The order would allow the federal government to close off caribou habitat, resulting in lost jobs and billions of dollars in economic losses, the province said in March.

In 2017, the B.C. government started negotiations to develop a conservation agreement to avoid an emergency order, focusing on the West Moberly and Saulteau First Nations.

"I believe the federal government fully understands where we're going on this and they're giving us the latitude as they should to find a way forward that's in the interests of the community and the caribou."

The province also expects to wrap up consultations in a shorter time frame than the two-year horizon outlined, hopefully before Christmas, Horgan said.

The news was met with skepticism by Chief Roland Willson of the West Moberly First Nation.

Willson said he was expecting a strategy to be announced by the end of this month, not a two-year grace period for the government to act.

"I'm upset, I'm confused about what's going on, I thought we were recovering caribou. All of a sudden they're hitting the pause button for two years. How does that get us closer to saving caribou?" Willson said.

"We're losing our culture because of this and they don't seem upset about that," he said.

About 217 animals remaining in the West Moberly's territory, he said, and the nation would like to see the population recover to historic levels of "thousands."

The issue has created tension in the Peace Region and Willson said their members have been subjected to racist posts online that blame "the Indians" for dwindling herds and threaten violence.

"There needs to be an investigation because that's called a hate crime. Some of the stuff being said about 'shooting Indians' and all that shouldn't be tolerated," he said.

Horgan told reporters that government had been alerted to the "provocative statements that inflame insensitivity," but was unaware of calls for an inquiry or investigation.

Horgan said the government responded to the issue but didn't clarify how.

Others expressed relief over the pause for dialogue.

"We didn't have any consultation whatsoever until the partnership agreement was presented to us," said Tumbler Ridge Mayor Keith Bertrand.

Bertrand said he has no pressing concerns, except that two draft agreements don't specify an altitude for proposed protected areas that might affect higher elevation backcountry activities like snowmobiling.

"All the footprints of our existing mines have been carved out of the moratorium so we're fairly safe as far as that goes for the time being," he said.

The BC Council of Forest Industries said the extension gives breathing room to the industry as it faces "significant challenges." Timber supply shortages, high log costs and volatile market prices have led to mill closures and curtailments across B.C.'s Interior.

"Considering these circumstances, it comes as some relief that the province has seen fit to pause to ensure that collectively we strike the right balance between caribou recovery and economic viability," said council CEO Susan Yurkovich in a statement.

Mountain caribou from U.S. are being sent to British Columbia