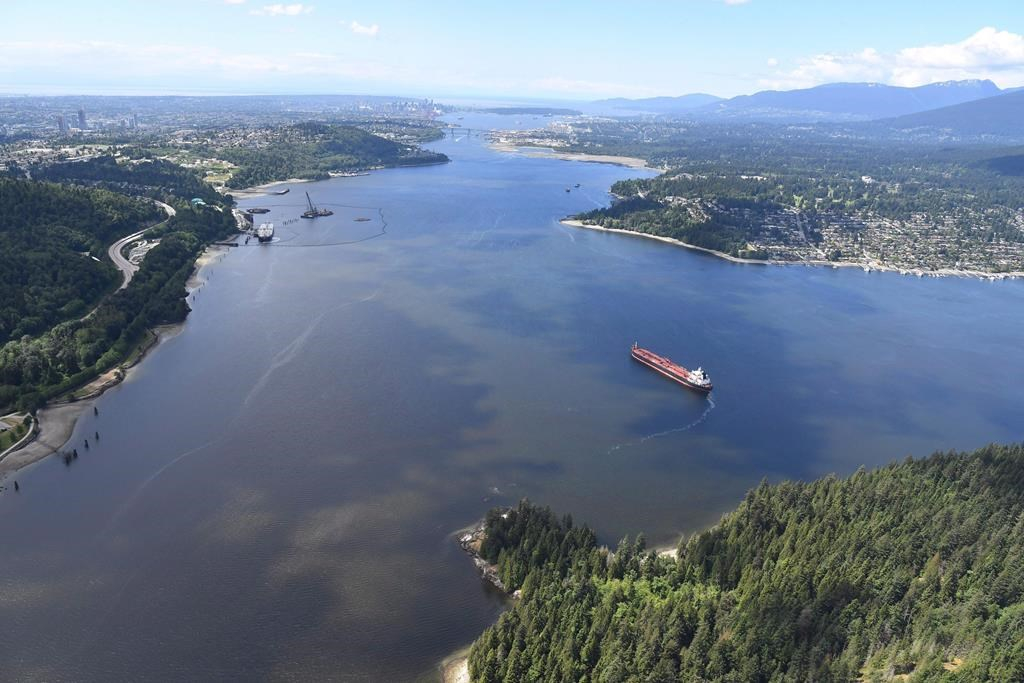 A aerial view of a tanker in Burrard Inlet in Burnaby, B.C., is shown on Tuesday, May 29, 2018. File photo by The Canadian Press/Jonathan Hayward
Previous story
Next story

A pair of controversial environmental bills scaled their final hurdle in the Senate on Thursday, over the objections of critics who warn the two pieces of legislation will kneecap Canada's oil industry and fuel separatist sentiment in Alberta.

Senators passed Bill C-69, which overhauls the federal environmental assessment process for major construction projects, by a vote of 57-37.

They also approved — just barely — Bill C-48, legislation barring oil tankers from loading at ports on the northern coast of British Columbia. That bill passed on a vote of 49-46, only narrowly escaping defeat.

The two bills have together become a flashpoint between the Liberals and Conservatives over how Canada can protect the environment without driving investment away from the fossil-fuel sector.

C-69 imposes more requirements for consulting affected Indigenous communities, widens public participation in the review process and requires climate change to be considered when major national resource-exploitation and transportation projects are being evaluated. It applies to a wide range of projects including interprovincial pipelines, highways, mines and power links.

The Senate made more than 200 amendments to that bill earlier this month, but the government accepted only 99 of them, mostly to do with reducing ministerial discretion to intervene in the review process.

The two bills put to the test senators' policy of generally bowing to the will of the elected House of Commons when there is a dispute between the two parliamentary chambers about legislation.

Conservative Sen. Richard Neufeld called C-69 "one of the most toxic, polarizing and divisive bills" he's encountered in 10 years as a senator.

The pair were among a long list of bills the Senate pounded through late into the night Thursday as the chamber prepared to adjourn for the summer and the subsequent election.

The House of Commons called it quits earlier in the day on a sombre note, with MPs delivering condolences following the death of Conservative MP Mark Warawa.

But Canadians haven't heard the last about the pair of bills. They're both destined to be fodder for Liberals and Conservatives on the campaign trail to this fall's election.

Conservative Sen. David Tkachuk said the government has done resource-dependent communities in Alberta and Saskatchewan a "disservice" by rejecting the Senate's amendments to C-69.

"Mark my words," he warned, "these people will let them know exactly how they feel this October."

Bill C-48 imposes a moratorium on oil tankers north of Vancouver Island. The government accepted a Senate amendment requiring a mandatory review of the tanker ban in five years.

The Senate committee that reviewed the bill recommended in May the entire Senate vote down the bill in its entirety, but that didn't happen, leading Conservatives to accuse the Independent senators who make up a majority in the chamber of being Liberals in disguise.

Conservative Sen. Michael MacDonald was one of a few from his caucus to make final pleas with his colleagues to not proceed with the bill.

He said it "will be devastating for the Alberta and Saskatchewan economies."

However, several Independent senators rose to speak in favour of the bill, including Yukon Independent Sen. Pat Duncan.

"I believe we should be doing it," said Duncan.

Ontario Sen. Donna Dasko, who was on the committee that studied the bill in the Senate, said she thinks "it is quite a good bill."

Conservative Sen. Dennis Patterson, a former premier of the Northwest Territories, said after the bill passed that it would "... not actually ban tankers from the Hecate Strait; it simply landlocks Alberta and Saskatchewan oil, and destroys the possibility of economic development in northern Indigenous communities."