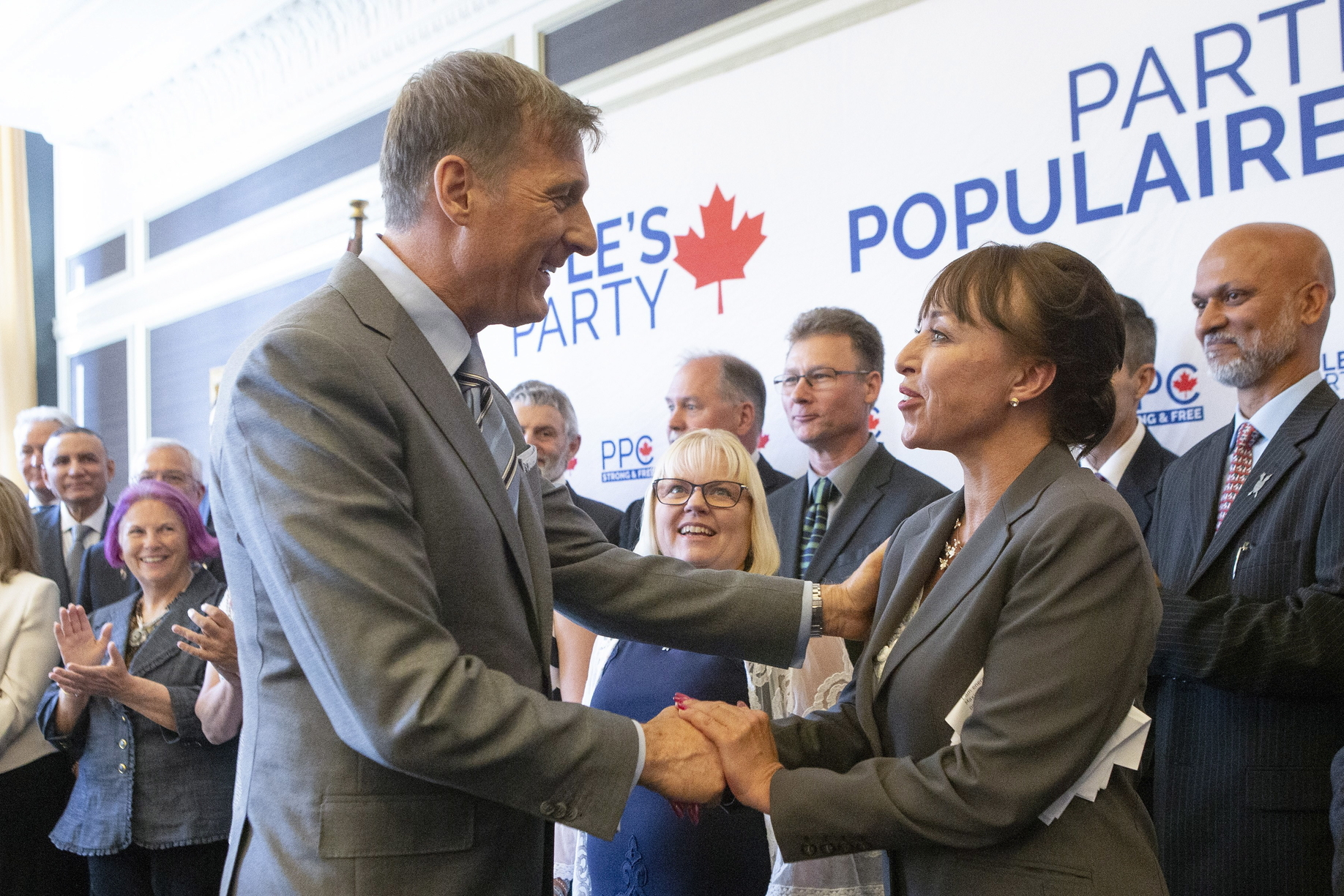 In one breath, the leader of the People's Party of Canada (PPC) said "there is no climate change urgency in this country," promised to deliver "politics based on fact" and assured observers his party would deliver "a concrete environment plan."

Bernier's contradictory remarks on climate change were delivered after he formally announced 40 candidates the PPC will put forward in Ontario for the Oct. 21 federal election. The roster includes the widow of former Toronto mayor Rob Ford, Renata Ford, who will run to become a member of Parliament for the same riding her brother-in-law, Ontario Premier Doug Ford, holds provincially.

Much of the emphasis of Bernier’s remarks was a pledge to do politics differently, "based on principles and conviction."

"We have the right ideas, because our ideas are based on the Western civilization values: smaller government, limited government, individual freedoms and personal responsibilities," he said before diving into a long spiel about climate change.

Bernier told the crowd of around 100 supporters (of which 40 were candidates) the federal Conservatives and Liberals were "doing the same thing on climate change: they're not telling the truth to Canadians."

He said neither party will be able to meet Canada’s Paris Agreement target — to reduce emissions to 30 per cent below 2005 levels by 2030 — and their plans are not good solutions. Prime Minister Justin Trudeau is promising to "tax and rebate," while Conservative Leader Andrew Scheer wants to "tax and subsidize," he said.

Bernier questioned the mounds of scientific research linking the global climate emergency to human activity. This includes two stunning United Nations reports released in the past year revealing human activity has put one million species at risk of extinction and brought the world within a little over a decade of apocalyptic natural destruction.

Bernier said he believes other factors have be taken into consideration, "like the sun, the river, the ocean." He was informed of these factors a couple of weeks ago by Patrick Moore, formerly of Greenpeace, who has called climate change "fake science."

"I’m not a scientist, we are not scientists, but we are doing politics based on facts, and we know there are other scientists with other points of view," Bernier said Friday, adding his party will have "a concrete policy on environment" that will make sure Canadians can "swim in the lakes, fish in their rivers and have clean land."

When pushed by National Observer to clarify his stance, Bernier reiterated human activity was not the main cause of the global climate crisis.

"That's the difference between you and me," he said, before noting his party would also bring back "the $2.3 billion that the Liberal government is giving to African countries to fight climate change."

("Do you really think these dictatorships in Africa will use the money to fight climate change?" he asked.)

Bernier mistook the amount in his remarks. In fact, Canada has pledged $2.65 billion in climate finance to developing countries by 2020-21 to help the poorest and most vulnerable global communities transition to low-carbon economies and build climate resilience.

He claimed that while Canada should help countries in the event of a humanitarian crisis or an environmental disaster, it was not their responsibility "to build roads in Africa and fight climate change in Africa."

"We are starting a common-sense revolution," he said.

'I found that Bernier is passionate, just as much as my husband was': Renata Ford

Bernier told reporters Friday afternoon Renata Ford approached the party and that "it's an honour and a privilege" to have her on board. He said she would bring "common sense" to federal politics.

The Toronto-area seat she is running for is currently held by Kirsty Duncan, the federal science and sport minister. The Liberals have held the riding for all but four years since 1980.

“The time is right now for me,” Ford said, being the only one among the 40 candidates to deliver remarks after she was introduced.

"I found that Bernier is passionate, just as much as my husband was, on the real issues that concern Canadians, and he's not afraid to stand up," she told reporters afterward.

Renata Ford’s candidacy comes more than a year after she filed a $16.5-million lawsuit against Ontario Premier Doug Ford, alleging he has deprived her and late husband Rob Ford’s children of millions of dollars, including shares in the family business and a life insurance policy.

Renata Ford said her lawsuit against Doug Ford is “still in front of the courts and I can’t comment on that.” She added her candidacy has nothing to do with her financial situation, but rather is about Bernier, the party and the people of Canada.

"Doug is his own person, and he gets to choose who he wants to vote for," she said, refusing to clearly answer questions about whether she informed the premier of her candidacy before it was formally announced on Friday. “We’re a family, and we stick together… but we have different opinions.”

“I’m healthier, stronger, I have great support and I think a lot of people go through hard times, and they come out," she said.

'Welcome to the revolution'

On Friday, Bernier tried to present his startup party as a more conservative alternative to the federal Conservatives.

The event's MC, Wilfrid Laurier professor and People's Party candidate David Haskell, began his remarks with a reference to free speech advocate Lindsay Shepherd, an opinion writer who has criticized left-leaning activists for suggesting that there's no difference between white nationalists and white supremacists and who also expressed concerns about how white people will be treated "when we are the minority."

Haskell also made references to recent headlines about Islamophobic comments made by Conservative MP Michael Cooper.

“Economically, we’ve created deficit over deficit, but it's the deficit of our personal freedoms that we should be particularly concerned about,” Haskell said. "Ask Michael Cooper what happens when a Conservative insider like (him) speaks up for conservative values, and they’ll tell you that Andrew Scheer and the Conservative Party turn their backs on you. They tell you to shut up.

“There is a party that will stand up for Canadians who dare to hold conservative values: it is the People’s Party. There is a federal leader willing to reject political correctness to find solutions for all Canadians: that’s Maxime Bernier."

Haskell said he was running under the PPC banner because he wants "to be able to tell the truth."

"In times like this, telling the truth has become a revolutionary act. So ladies and gentlemen, welcome to the revolution," he said to great applause.

Bernier echoed Haskell's words in his own remarks that his candidates can have different opinions and debate with him, taking indirect shots at the Conservatives and Liberals, which have individually made headlines for rebuking (or not rebuking) their caucus members.

"My job is not to control them," Bernier said. "This is the end of political correctness in this country."

Editor's note: This article was updated at 10:15 a.m. on June 23, 2019 to identify Lindsay Shepherd as an advocate who defends free speech.

Good news...let the neo-con narcissists start to splinter under the deadweight of their own greed and hate.

There is a fair amount I don

There is a fair amount I don't agree with Bernier on, but he isn't necessarily wrong on climate. Canada will be affected, but in terms of changing the result, nothing we do in Canada will directly change the result 1/10th of one degree. I am not saying we should or can do nothing, we need to be part of the global solution, but if countries like China and India can't manage growth without reducing the total output of ghg's, nothing caused by human sourced ghg emissions will matter. It will all happen because the countries with large populations that are currently growing relatively quickly essentially control the outcome.