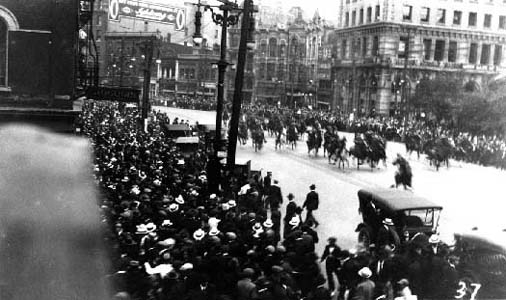 On June 21st, 1919, one of the most emblematic moments in modern Canadian history came to a violent head in downtown Winnipeg.

On that day—known in history books as Bloody Saturday—thousands of protestors clashed with riot police on the streets of Canada’s then third largest city. Shots were fired by the Mounties—known at the time as the North-West Mounted Police—and when the smoke cleared, two demonstrators were killed, and dozens more injured. A streetcar lay tipped on its side and a city turned on its head.

Bloody Saturday was the climax of Winnipeg’s General Strike which lasted over a month and involved tens of thousands of workers and supporters demanding better working and living conditions. The state violence and subsequent arrests effectively crushed the strike.

But its impact endured.

While in the short term, the strike was broken, the movement ultimately laid the groundwork for a stronger labour movement in Canada. One of the arrested leaders, J.S. Woodsworth, went on to become a founding member and the first leader of the Co-operative Commonwealth Federation, or CCF, the predecessor to the modern day New Democratic Party.

Decades later, with one Tommy Douglas at the helm, the CCF would help establish that most iconic of Canadian institutions, Medicare, ensuring universal health care throughout the country. Access to--and funding for—health services have remaind both a symbolic battleground and a political lightning rod across the nation ever since.

That said, the strike was not only about labour rights and the establishment of a safety net that forms the foundation of social democracy.

Women went on strike as equal parties—albeit with demands unique to their own conditions—and, in doing so, established the right to organize on their own accord. It was women telephone operators during the early days of the strike who pulled the plugs of five hundred phone lines. And throughout the process, women positioned themselves at the backbone of the movement’s structure, laying the groundwork for years of struggle to come.

For different reasons, recently-arrived immigrants also played a key role in the upheaval. Many faced inferior working conditions, not to mention day-to-day discrimination. This was especially so for those heralding from Eastern Europe, given the recent experience of World War I and the spectre of the Russian Revolution fresh in the minds of many.

In the end—unsurprisingly--immigrants were disproportionately blamed for the General Strike, a narrative which effectively served as a justification for further repressive state policies against new arrivals.

If any of this sounds familiar, it should.

In an era where immigrants are again viewed with suspicion—and in some circles with disdain and even vitriol—it is instructive to look back one hundred years to how new arrivals were similarly discriminated against. Ironically, some descendants of those same European immigrants of a century ago now train their sights on today’s newcomers.

Yet the forces driving migration are as dire as they have ever been. The most recent UN statistics released this month suggest that there are now 70 million people worldwide forcibly displaced from their homes—a figure that does not include the tens of millions on the move for reasons of economic survival.

Like in 1919, global inequality is a key factor influencing migration. On an international scale in the 21st century, relative inequality may be trending downwards, but absolute inequality is moving in the opposite direction. Wealth continues to concentrate among the few.

Comparisons between different periods may be tempered by time, but they nonetheless remain prescient. Everywhere one looks these days, the rise of populism—on the left and the right—is an undeniable force reacting to an increasingly troubled social landscape.

The Winnipeg General Strike represents one of those seminal moments in history when discord spills onto the streets. As was the case in 1919, such generational heaves are hugely disruptive—and can trigger tragic consequences.

But just as such circumstances have deep-rooted and complex causes, so, too, do they hold the potential to effect profound and long-lasting change.