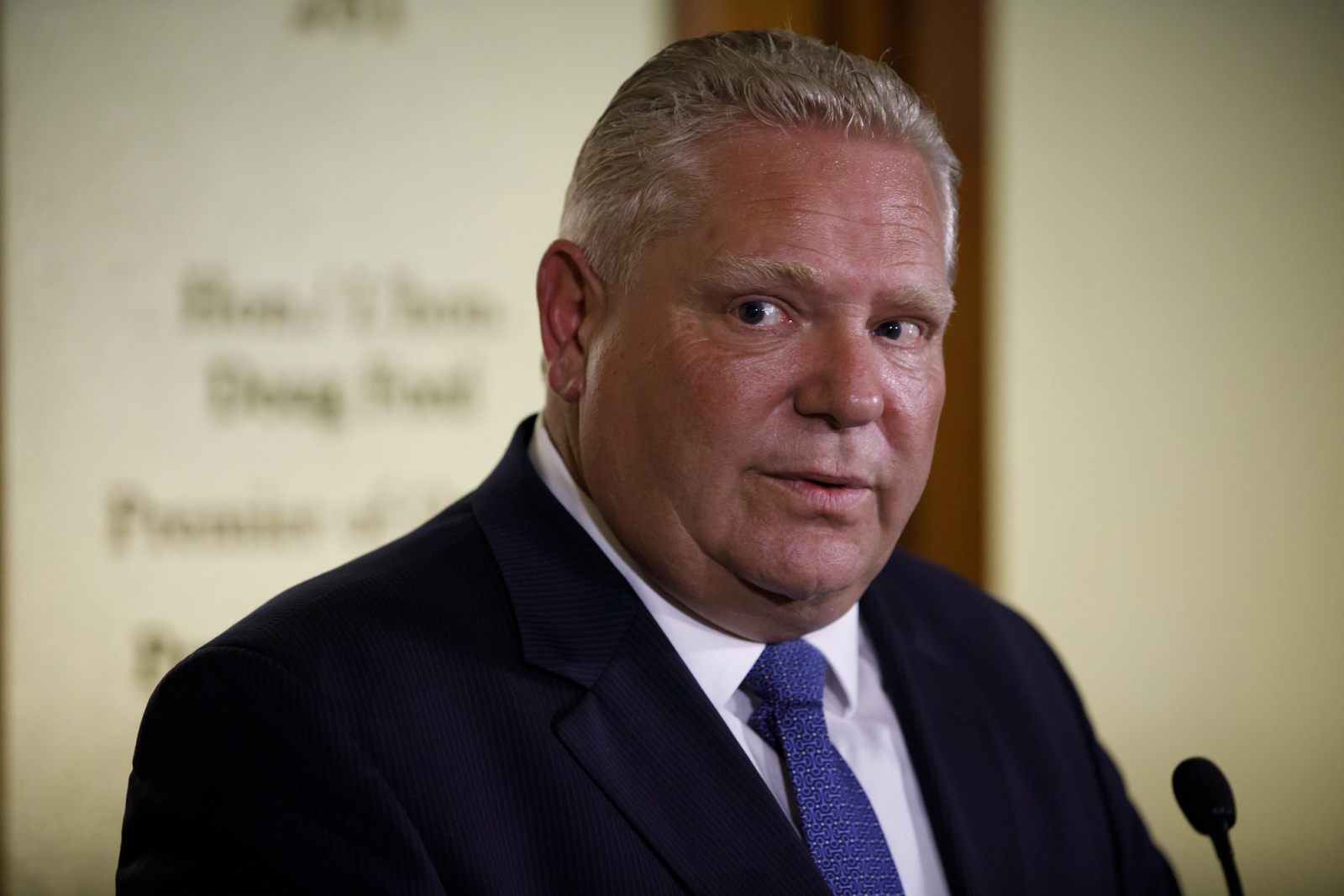 When Aidan Gowland first saw the financial assistance he was to receive from the province for his final year of university, he thought he had made a mistake in his application or that the Ontario government had given him the wrong amount of money.

There was a difference of more than $3,400 between the amount of financial aid the fourth-year history and political science University of Toronto student received last year from the Ontario Student Assistance Program and what he had been allocated this year.

Gowland, 27, is disabled and unemployed as he completes his studies. Last year, he bought Christmas presents for friends and family for the first time, and paid for his own medication and physiotherapy himself (without needing his parents' contribution). A reduction of more than $3,400 in his student budget means he won't be able to do any of that and sustain a full-time education.

"I really thought I would have to drop out," he said.

I realized two days ago that my hard work has paid off and I am able to complete my last undergrad course next August, instead of the following May. Today, I learned that, as a disabled student who relies completely on OSAP for school, I cannot afford to continue.

The cuts were delivered to students this month after Doug Ford’s government lowered tuition fees by 10 per cent while simultaneously eliminating the previous Liberal government’s “free tuition program,” which the Auditor General argued would eventually cost the province $2 billion a year. Grants were also eliminated and replaced with repayable loans that would go to students with a family income of less than $50,000. The six-month interest-free grace period for students was also axed.

The government has argued lowering tuition would help students, but no one saw this overhaul coming — not at the drastic scale that it was delivered — and it has left students scrambling to find alternative sources of funding before the academic year begins in September. Many worry these reductions to grants mean they’re actually falling behind, as they will not longer be able to survive, or sustain, their post-secondary education.

As students have logged on to see their financial standing, they have taken to Twitter, outraged and upset at the stark differences between what they will be getting this year compared with last. The thousands of tweets made OSAP the top trending topic in the Greater Toronto Area, and it continues to build traction with the hashtag #OSAPcuts.

Changes to OSAP were one of the top reasons for complaints to the Ontario Ombudsman's office, according to a report the office put out Tuesday, garnering 181 phones that were mostly related to funding decisions undertaken by the Ford government.

Gowland is distraught. He is scrambling to find alternative sources of money, trying to figure out the best way to get a loan from a relative or a bank.

His parents cannot help. A house fire in 2017 has tightened their family's budget, as they rebuilt their home. Gowland's mother works at an Ontario college, where the 10 per cent tuition reduction and OSAP cuts have created uncertainty about which programs and faculty or administrative roles may need to be cut.

"In essence, these OSAP cuts have hurt not just one person in our family — me, the OSAP beneficiary — but two, as every college (and therefore every college employee) relies heavily upon domestic students’ OSAP," Gowland wrote in a letter to his representative MPP, Christine Hogarth.

"Hopefully, I'll be okay," he said. "But my real concern is for the students who are first generation post-secondary students, or single mothers, or other people who are already just barely making it through school. If I'm struggling, how will they survive this?"

The government argues that the changes to OSAP introduced in 2017 by the previous Liberal government to make post-secondary education more accessible and affordable for students from low and middle-income families were not sustainable.

"Reducing tuition and increasing the affordability of college and university will help Ontario students get the education and training needed for the well-paying jobs in our modern economy," Rebecca Bozzato, a spokesperson for the Ministry of Training, Colleges and Universities, said in a statement.

"Students and their families make great sacrifices to pursue post-secondary education. For them, every dollar counts. This is why our government introduced an unprecedented 10 per cent reduction in college and university tuition fees," she added.

But Gowland says the Liberals’ new program was a more livable funding model.

"I was finally feeling like I can do school and actually have, like, a life as well and I can be successful," he said. "It was just putting stuff back onto the table for me in terms of taking care of myself that hadn't been there before and certainly won't be there this year."

Thanks @fordnation Because of your #OSAPCuts my daughter won’t be attending school this September. She uprooted her life in April w plans/hopes of building a bright future. Not now #Asshat #AnotherFordFail #ForHisEgoNotThePeople #ForTheOnePercent #FailingOntarioResidentsDaily

In her statement, Bozzato cited the 2018 Auditor General's report, which found that OSAP expenses would increase to over $2 billion by 2019.

"In order to address the previous government’s unsustainable spending, in January our government announced we are restoring financial sustainability to OSAP, to ensure the program supports the students who need it the most for years to come," she said.

According to the Auditor General’s 2018 report, the Liberal government's 2017 changes were expected to have a positive impact on the province's finances. The changes were set to provide a larger percentage of financial aid in the form of non-repayable grants rather than repayable loans — 98 per cent in grants in the 2017-18 academic year, compared with 60 per cent the year before. Although more people were getting financial aid — 2 per cent more university recipients and 2 per cent more college recipients — the increase in enrolment was only 1 per cent for universities and 2 per cent for colleges, “indicating that the number of people accessing higher education is not commensurate with the additional OSAP funding.”

This increase in financial aid in the form of grants exceeded expectations and calculations, resulting in projections that OSAP could cost the province $2 billion annually by the 2020-21 fiscal year, a net increase of 50 per cent from the 2016-17 fiscal year.

“It’s absolutely heartbreaking to see the impact Doug Ford’s cuts to OSAP are having on students,” said Chris Glover, Ontario NDP critic for Colleges and Universities, at Queen's Park. “Students shouldn’t be forced to give up their dreams of going to college or university because cost is a barrier. Students shouldn’t be forced to drop out of college or university part-way through their studies because they can’t afford to continue. And students shouldn’t have to juggle jobs and their studies, only to graduate with crushing amounts of debt and all the anxiety that comes with it.”

The prev @OntLiberal govt made huge investments to ⬇ tuition by ⬆ #OSAP grants because we believe that income shouldn't dictate whether you go to college/uni. #ONPoli #FordCutsHurt #FordIsFailing

'How has Ontario’s government "for the people” helped me?'

The impacts of these cuts to OSAP are reaching beyond Ontario's boundaries.

Danielle Lorenz is a PhD student at the University of Alberta studying educational policy. She moved there from Ontario, where she completed her undergraduate and graduate degrees.

The rules of OSAP dictate that you are assessed based on where you live in the 12 months prior to starting your post-secondary education. This means that Lorenz had to apply to the Ontario financial aid program to support her higher education. (She can only get funding in Alberta if OSAP denies her application.)

This year she is receiving more than $5000 less than last year in financial assistance from Ontario. Much of this difference comes from a significant reduction in the educational grants she received in the past.

Like Gowland, Lorenz also registers for disability services. Financial aid means that "it's just easier to live," she said. A $5,000 reduction means she has to work that equivalent amount of hours just to pay for the things she needs: food, shelter, basic standards of living. Lorenz notes she lives in Edmonton, where the costs of food and heating are substantially higher.

Lorenz, 34, wasn't eligible to vote in the Ontario election because she is now a resident in Alberta. She wasn't expecting this, and worries how this will "perpetuate an ongoing cycle of inequity" in the education system, taxing the poorest students the most, who tend to be Black, Indigenous and other students of colour.

"I knew it was going to be difficult the minute I saw those numbers," she said. "I wish I knew who to talk to. As an Alberta resident, I don't have an MPP to contact. I'm kind of lost in terms of getting my voice heard. I'm in a weird liminal space where I don't know what to do."

All the students who spoke to National Observer expressed concern that these OSAP cuts would have short-term impacts — increasing student drop-out rates — but also long-term impacts — more part-time students in post-secondary education who will work and study simultaneously.

They worry that this will result in a crisis in student mental health.

"Just in general, society is so much better when more people have post-secondary education and I think there will be fewer moving forward because of these cuts," Gowland said. "I just don't get it. How has Ontario’s government ‘for the people’ helped us? It simply hasn't."

She recognizes that she is lucky because her dad is a retired teacher who has some money saved away, and she has money coming in through a summer job. But she won't be able to satisfy the OSAP rules that demand the loans be paid off straight after graduation. Her budget will be tighter because of this.

All her classmates are frustrated, she said because "it came out of nowhere. It still makes no sense. It's unfortunate and upsetting."

"It really effects everyone in so many detailed and intricate ways. There’s no one who isn’t touched by this," she said. "I really want our government to show us in dollars and cents how much they’re saving, because in my opinion, those numbers and cents don’t add up and it's going to hurt us a lot more than it saves them."

Ford seems intent in making Ontario another of those failing jurisdictions where youth unemployment is a rampant drag on their economies. How much will ultimately be saved, or provide real tax revenue, by denying the education neccessary for satisfying employers' expectations and for causing them to actually look at an applicant's resume? Worldwide, opportunities for employment in occupations that don't require post secondary education are disappearing faster than the glaciers. Snow making may restore ski runs for the wealthy, but the declines in Ontario's status as having one of the best educated workforces, won't entice employers to invest in economic activity for this province, or for "these people"!