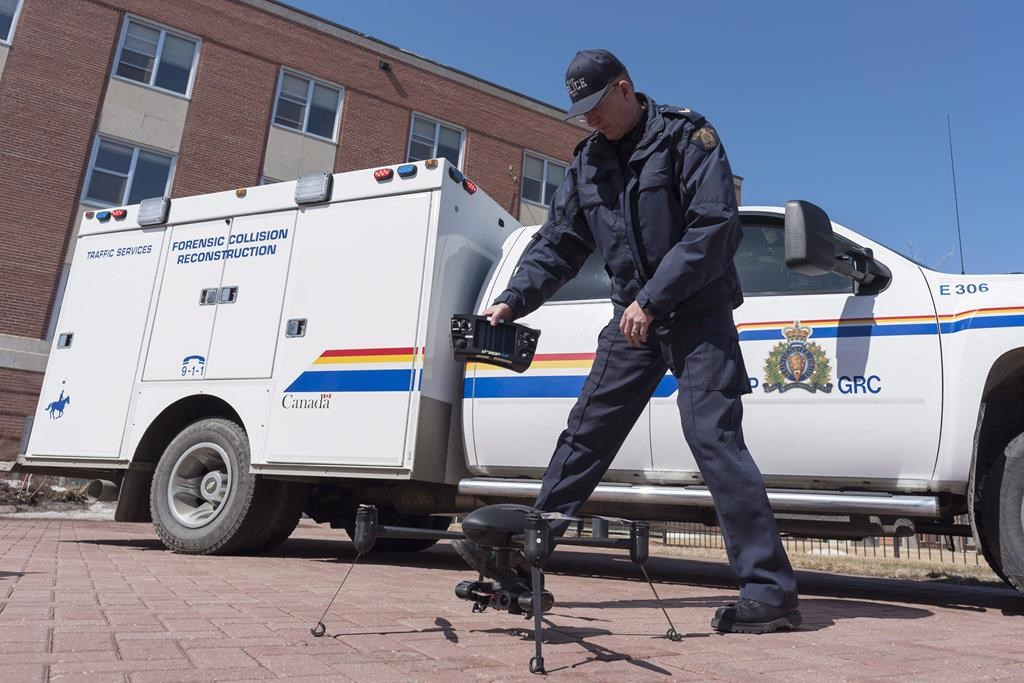 RCMP Cpl. Doug Green displays a drone, one of a number of tools used in Forensic Collision Reconstruction outside Depot Division in Regina, Saskatchewan on Thursday, April 19, 2018. File photo by The Canadian Press/Michael Bell
Previous story
Next story

The RCMP has assembled a fleet of more than 200 flying drones — eyes in the sky that officers use for everything from international border investigations to protecting VIP visitors, newly disclosed records show.

The compact airborne devices are equipped with tools including video cameras and thermal-image detectors, and the Mounties are looking into more advanced applications that can help generate three-dimensional pictures.

An RCMP privacy assessment of the budding technology says the force is committed to protecting any personal information the drones collect and that officers strive to comply with federal laws.

But one privacy expert notes the assessment, recently released under the Access to Information Act, was drafted in 2017 — seven years after the RCMP's first drone was used in Saskatchewan to help reconstruct traffic collisions.

The RCMP should not have waited the better part of a decade before turning its mind to the privacy effects of "what is obviously a surveillance technology," said Micheal Vonn of the British Columbia Civil Liberties Association.

The assessment provides few details about the technical capabilities of the cameras attached to the drones and how the Mounties actually use the images they capture, she added.

There are legitimate policing uses for drones but also potentially invasive ones, such as taking photos of faces or licence plates at public events so they can be electronically run against images in databases, she said.

The RCMP says it has procured drones — or Remotely Piloted Aircraft Systems, as the force calls them — from half a dozen manufacturers for investigating crime scenes, search and rescue, monitoring critical incidents, conducting surveillance and even researching rogue drones that try to interfere with police ones.

A court-approved warrant is obtained before using a drone for surveillance purposes, except when emergency circumstances make it impractical, the privacy assessment says.

While advance notice of drone operation might be provided to the public, people "may or may not be aware" that the device is recording, depending on tactical considerations and safety concerns, the document adds.

Each drone has a memory card that captures images. Once the miniature copter is back on the ground, the card is removed so the images can be transferred to an officer's workstation. If the drone is being used on a particular case, information deemed to be useful evidence is passed to the lead investigator.

Other information is set aside and kept for a predetermined period before being destroyed.

The drone program is intended to "add value to evidence gathered during an investigation" and should not be relied on as the sole source of evidence, the RCMP cautions.

The assurances provide some comfort, but increasingly police forces are not just investigating crimes but engaging in intelligence gathering, Vonn said.

"There is a lack of clarity about what that looks like in relation to the collection of data and what happens to it."

Air Force aiming to have armed drones in the air in next six years: commander