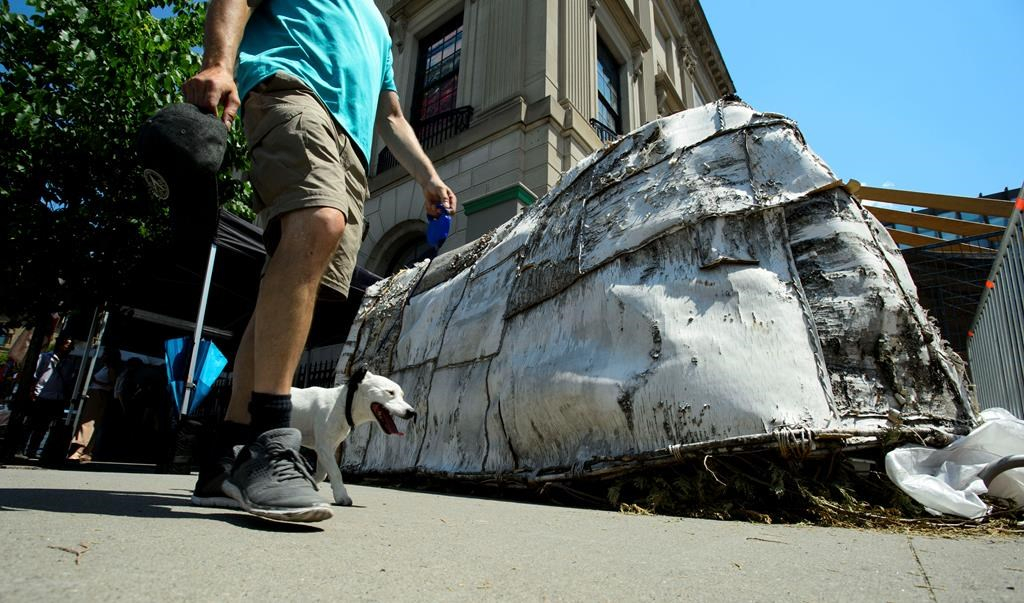 A man and his dog walk past a wigwam where Verna Polson is hunger striking due to a lack of consultations regarding the former US Embassy building which was dedicated to Indigenous people. file photo by The Canadian Press/Sean Kilpatrick
Previous story
Next story

An Algonquin grand chief's hunger strike is over after an agreement with the federal government on a project to create a major Indigenous centre in Ottawa.

Steps away from Parliament Hill, Verna Polson, head of the Algonquin Anishinabeg Nation Tribal Council, had been in a wigwam since Monday without eating or drinking.

"We're glad an agreement was reached," said Lisa Robinson, chief of Wolf Lake First Nation, an Algonquin community that isn't part of Polson's group, who was on the site of the protest following the deal.

"The big thing for us and the chiefs working at the Algonquin Nation, we were concerned with the health of Grand Chief Verna," she said.

Polson was protesting the fact the Algonquin Nation was not an equal partner in the redevelopment of the building in the former U.S. Embassy directly across from the Peace Tower, which is meant to become a centre known as the Indigenous Peoples Space.

In June 2017, the federal government pledged the use of the embassy building to a group of Indigenous organizations, made up of the Assembly of First Nations, the Inuit Tapiriit Kanatami and the Metis Nation Council.

The building, used for not much since American diplomats moved to a new larger building 20 years ago, was hung with banners representing the three large Indigenous groups and Prime Minister Justin Trudeau promised to work with them to transform the property. He held a public event outside, calling the project a step to "ensure that the dialogue we have started is sustained and deepened as we move forward together."

But Polson said the Algonquin deserve equal standing because the building is on unceded, traditional Algonquin land.

"I think we're going to be playing a pretty prominent role," Robinson said, but wouldn't discuss details of the announcement pending a statement from Polson herself.

At stake in the conversations among the parties was not just the prominent location on Ottawa's Wellington Street but two additional sites that might be added to the Indigenous Peoples Space: lot adjacent to the former embassy and a building backing onto it from the next street south that now holds a bank.

Earlier in the day, Assembly of First Nations National Chief Perry Bellegarde said his organization was pushing the federal government to formalize the two additional locations as part of the space. He said if that was guaranteed, that might convince Polson to end her strike.

Robinson said formalizing the status of those sites is part of the agreement.

"I think we're happy with how that turned out," she said.

The Assembly of First Nations has supported Polson but her proposal that the Algonquin Nation have equal standing as a partner was opposed by national groups representing Inuit and Metis peoples.

Bellegarde said Tuesday a series of memorandums of understanding had been drafted with the help of Assembly of First Nations staff and might form the basis of an agreement between the Algonquin Nation and the national organizations.

In Ontario cottage country, residents fear what may be coming