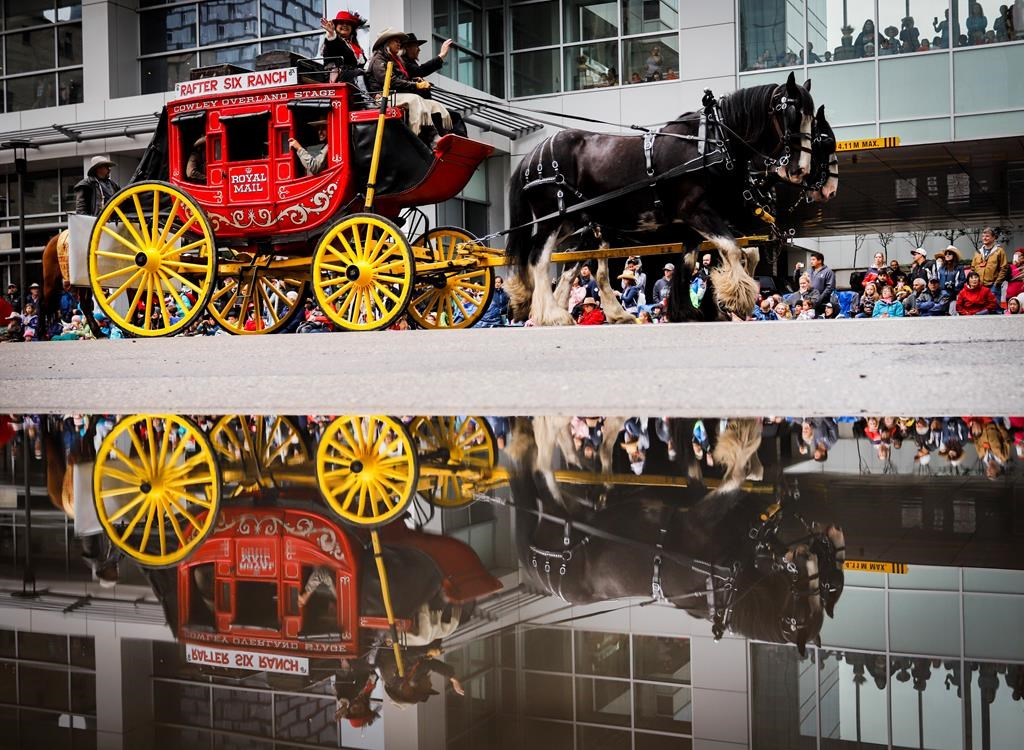 A stagecoach is reflected in a puddle during the Calgary Stampede parade in Calgary, on Friday, July 5, 2019. Photo by The Canadian Press/Jeff McIntosh
Previous story

It was a soggy start to this year's Calgary Stampede, but the sky lightened and the drizzle let up just in time for the parade that kicked off the annual 10-day celebration of western life.

Umbrellas and plastic ponchos covered a sea of cowboy hats and shirts along the route Friday as a night of heavy rain continued into the early morning.

"Folklore tells us that it has never rained on a Stampede parade and look, it stopped!" said Mayor Naheed Nenshi before he removed his rain jacket and got on his horse.

He said the annual festival — which includes rodeo events, pancake breakfasts and rowdy parties — is a nice respite from the economic doldrums weighing on the city.

"The Stampede is a 10-day opportunity for us to change the channel," he said. "We've fallen victim ... too much to the waves of negativity in the world, and here's our real opportunity to remind people that we live in the best place in the world."

Amber Marshall from the TV series "Heartland" was the parade marshal.

Before the parade started, Angela Rak was huddled in a wool plaid blanket as she sat in a camping chair under a big umbrella.

"When we got here it was really busy still, so we were lucky to find a spot, because it was actually filling up pretty quick," she said.

Valrie Stewart and her husband, Allan, woke up in the wee hours so they could get a good view of their granddaughter in the colour guard for the Red Deer Royals marching band.

"A lot of the chairs down there were already taken when we got here by 6 — a lot of early birds," she said.

Alberta Premier Jason Kenney rode in his first Stampede parade since winning the April election. He said the event is an opportunity to forget the economic downturn that has left many in the province down and out.

"Calgarians have had some challenging years recently, but we put all that aside to get together and celebrate our western heritage and I'm just pumped to be doing so," he said.

Kenney said some business would get done during the week of partying.

"We're also hosting an investment forum. We've got major global investors coming in here and I feel the signs of economic renewal. I hope Stampede will help that to take off."

"I've lived in Alberta for 34 years and enjoy every bit of it," he said.

"So many people have come to Alberta from around the world — like me — who are an integral part of this community and we celebrate together."