Quebec children at risk of lead exposure from water in schools and daycares, says provincial report 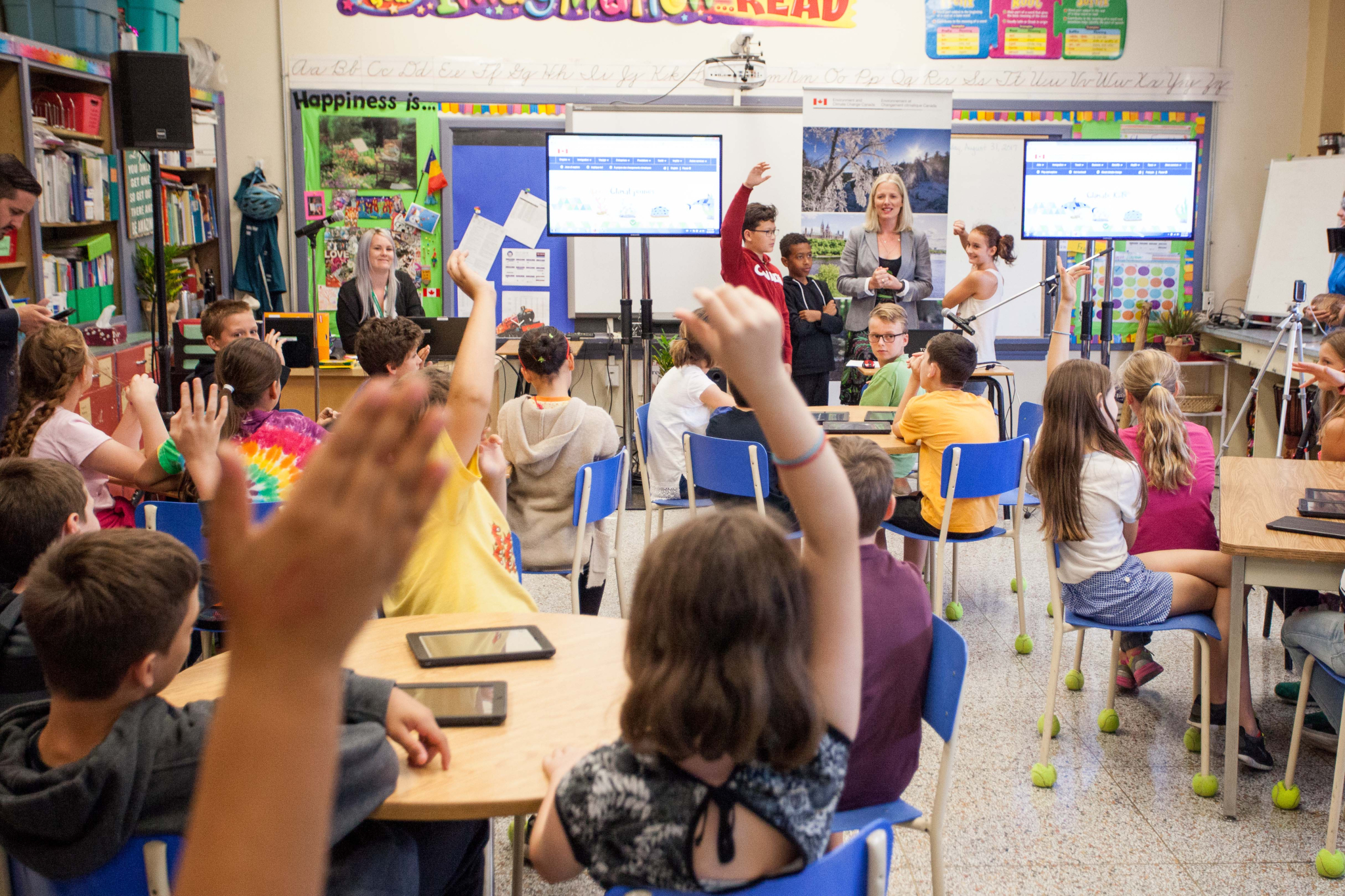 A new report says children in Quebec schools are at risk of exposure to lead in drinking water. Students at a school in Gatineau, Quebec listen to a presentation by Environment Minister Catherine McKenna on Aug. 31, 2017. File photo by Alex Tétreault
Next story

Children in Quebec are at risk of lead exposure from drinking water in their daycares and elementary schools due to inadequate oversight, says a provincial public health research institute in a new report.

Scientists say lead poses a serious health risk when absorbed into the body. It can also affect children's behavioural development and even their IQs, the institute’s study says.

While the new report says overall incidence of lead contamination in drinking water has decreased in recent decades, it notes that there were test results exceeding safety guidelines in a select number of schools and daycares. It also says there isn’t enough data available to determine whether the problem is more widespread.

The study was based on an analysis of existing data from municipalities and published scientific research. The authors also examined data from other jurisdictions as part of their efforts to assess the situation in Quebec.

In Montreal, the study cited research by public health officials from 2017 showing that 16 per cent of schools — eight out of 51 that were tested — had lead levels from at least one tap that exceeded safety limits.

In addition, both of these studies relied on an old limit of 0.01 mg/L, set in 1992. Health Canada announced on March 8 that it was lowering the acceptable limit to 0.005 mg/L.

Current rules in Quebec require the water utility providers in each city to test from a single tap at schools or daycares that offer services to children six years old and under. They don’t require municipalities to test every tap in these buildings, and in some cases, cities are not required to test all schools on their territory.

Michèle Prévost, a civil engineering professor who specializes in research on water quality, said it was unacceptable that Quebec is deploying flawed testing methods such as these.

In Montreal, the study cited research from 2017 showing that 16 per cent of schools — eight out of 51 that were tested — had lead levels from at least one tap that exceeded safety limits, reports @mikedesouza

“To be very honest, it’s a disgrace,” Prévost said in an interview on Wednesday at a lab where she teaches at Polytechnique Montréal.

The study’s authors said that current sampling methods allow taps to flow for five minutes prior to testing, but that this would “very certainly” result in finding misleadingly low lead levels in the samples collected.

As a result, Prévost, who was one of the scientists who reviewed the institute’s report prior to publication, estimates that there could be high lead levels that exceed safety limits in up to 15 per cent of the province’s schools.

The institute’s study notes that high lead levels could cause a loss of up to seven points on the IQ of an infant. Older children would also be affected, but to a lesser extent, the study said.

“Those are kids that are like sponges to lead. The younger they are, the more they absorb,” Prévost said. “You give them lead and they keep most of the lead in their body.”

The institute’s study makes four recommendations for the government: to study the issue further; to begin pilot projects to compare different types of testing; to develop new tools to help public health officials advise the schools and daycares; and to offer more support to help all partners evaluate and manage the risks.

Prévost said the government needs to go beyond these recommendations.

“If you had arsenic exceedances in food — in 15 per cent of your samples, would you consider that acceptable? I think not,” she said. “You would probably ask for something to be done to make sure that exposure is limited.”

But she added that the problem would be easy to fix if systems were in place to expand testing in all taps and replace older taps when needed. She noted that in some cases, schools and daycares might have some taps that release water that exceeds guidelines, and others that pass the tests.

But she estimated that most tests could be done with an affordable portable device that would cost a few hundred dollars and allow for testing at a cost of $8 per test.

“It’s not rocket science,” Prévost said, demonstrating how the sampling could be done within minutes.

When asked about the institute's new report, the City of Montreal explained that it has been conducting its own annual sampling in schools and daycares since 2013.

A spokeswoman in the office of Mayor Valérie Plante said that the city only collected one sample in a school that exceeded the safety limit, in 2016, but that a follow up test in the same building showed that the lead levels were below the limit.

The mayor's office also suggested that the main source of lead in drinking water was from plumbing, but added that Montreal had what it described as one of the most ambitious plans in Canada to upgrade municipal water infrastructure.

Quebec’s Education Department told National Observer in an email that it had taken note of Health Canada’s new water quality guidelines and that it would support school boards, which have the responsibility of overseeing the health and safety standards.

In a separate statement, the province’s Environment Department noted that provincial officials have stepped up efforts to improve oversight in the past five years, including requirements for increased testing by utility officials.

Prévost questioned the provincial government’s decision to release the report in July, several months after it was completed in February.

“It’s not school time, is it?” she said. “That report has been in preparation for quite a while. I guess lead is not a political topic of choice these days, but it should be. It’s not complicated... It’s not the most expensive problem we face in schools.”

Well, lead poisoning and lowered IQ may be exactly what the Quebec government & corporate sector is looking for - docile robots who won't quibble over religious symbol controversies, or the chronic, corruption and bribery in la belle province's industrial sector?