Why youth need to be part of climate emergency leadership now 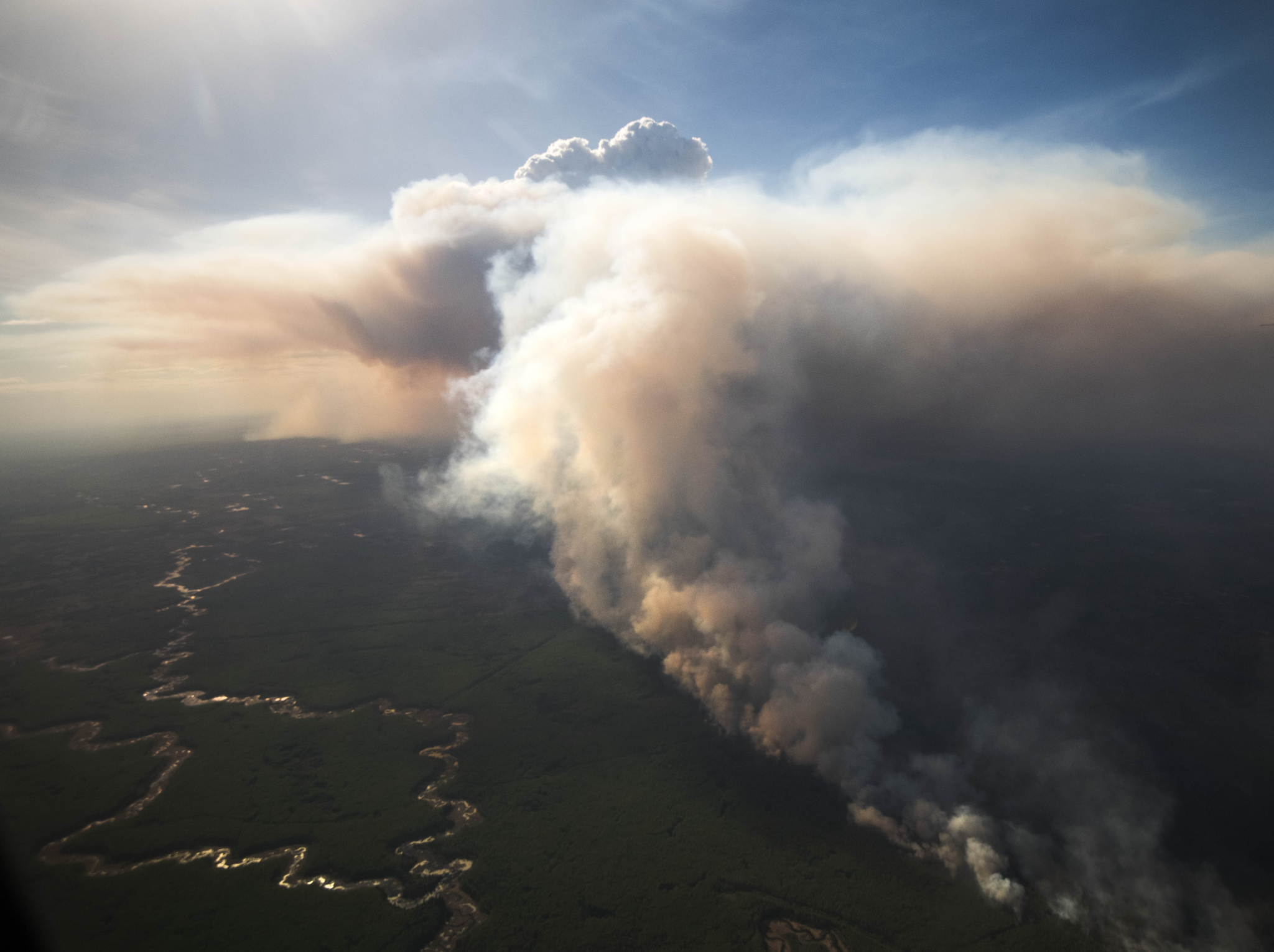 A photo of High Level, Alberta on May 21, 2019 as a wildfire consumes the area. Fires in the High Level region are still blazing out of control. Photo by Chris Schwarz / Government of Alberta
Previous story
Next story

It’s mid-summer, and the ancient boreal forests of northern Alberta have been on fire since early May.

Near the town of High Level, a 351,000-hectare fire still blazes out of control. The town and Indigenous communities nearby have been evacuated once already this fire season, and High Level remains in a state of local emergency. The wildfire has also periodically closed the only highway to Yellowknife, one of Canada’s most northern cities. Perched on subarctic tundra, it depends on the thoroughfare for fresh food and goods year-round.

Canada’s North is a young place. The average age of those in the region is a decade younger than the rest of the country. In Nunavut, to the northeast, the median age is 24.7 years old.

And in northern Canadian communities, young people watch the forests burn, the permafrost melt, the animals flee or die off and the oceans rise as the world’s older adults assure work is being done to solve what has become an existential threat to humanity itself.

The world’s youth, led by activists such as 16-year-old Greta Thunberg of Sweden, have risen up to demand immediate action. But what action is occurring often disregards young people at every level. While their voices may have reached media networks, the power of their collective talent has not been fully harnessed. It is imperative we act now to integrate youth into climate emergency leadership, and the work of adapting to the climate crisis.

At the ResiliencebyDesign (RbD) Research Innovation Lab at Royal Roads University in Victoria, B.C., our work addresses how to do exactly that. Our projects engage youth in climate action using art-based methods to increase awareness, actions and coping strategies. The outcome is a powerful social approach that helps youth explore and grapple with the harsh realities of the future.

In late May, as Europe’s youth held climate strikes and rallies, I joined my climate action colleagues at the European Climate Change Adaptation Conference in Lisbon, Portugal, to share the types of methods the RbD Lab uses to engage and involve youth in climate leadership.

During the conference, I presented on the methods and findings from several of the lab’s projects — including one where northern youth acted as thought leaders as their community recovered from a climate disaster.

We worked with the region’s youth to strengthen their engagement and decision-making influence in Wood Buffalo as it recovers long-term from the half-million-hectare fire.

Using photography, art, music and song, these young people have envisioned a community better able to survive and thrive in the uncertain future we face. The project’s youth leadership recently presented a report with recommendations to the mayor and council of the Regional Municipality of Wood Buffalo in November 2018.

Their ideas to build resilience touched on almost every aspect of community life, from transportation to education, health and wellbeing, volunteerism and community inclusion. Through the process of imagining how their community could adapt and recover, the youth participants discovered something about themselves: a growing sense of resilience.

“Working towards the goal of making a concrete change in the community helped me with my recovery,” writes 19-year-old Aishwarya Gurumurthy, a survivor of the 2016 fire, in the final report.

If our world is to adapt to climate change, building resilience in youth is essential. Ultimately, they are the leaders who will solve this complex crisis, the runners who will carry our torch through a very long race. Successful adaptation requires their voices, ideas and actions at every level of this critical conversation.

Robin Cox is a professor at Royal Roads University and the director of the ResiliencebyDesign (RbD) Research Innovation Lab.

By Jonathan Watts | News, Energy, Politics | March 11th 2019
Reports from the Race to a Safer World

OMG you annoy me.

OMG you annoy me.

Your heart's in the right place, (is it ever), but your head is on vacation. I looked up this "ResiliencebyDesign" web site, imagining it was some kind of engineering/architecture/science lab that was working on trains, batteries, fuel cells, actual solutions.

No. Every project listed is a project to get people to be more activist and aware and protesting and stuff. There's nothing in there about coming up with new societal infrastructures for energy, transportation, farming, construction, manufacture. I guess if enough people protest, some geek will be tasked with all that minor physical-sciences stuff; it'll probably take six weeks once the geek puts on his lab coat.

Weirdly, protest is all that the article counsels "youth" to get involved in. Every single project at the "RdB Lab" is about, well, sitting around talking and playing board games and being aware. None of it is about solving the actual problems. How do we rip out 100 million gas furnaces from 100 million buildings on this continent and replace them with heat pumps? How do we generate green electricity to run them? How do we switch over the entire continental (and global) internal combustion vehicle fleets to batteries, hydrogen, and biofuels? Can biofuels even power the tractors and combines that harvest the "bio"? They haven't so far. Why is that?

The only people that can even start to discuss those problems are people with extensive STEM educations. They should start at 18, in hopes of making serious new contributions to solutions before they are 30. I wouldn't waste time in Royal Roads, from what I can see of it; go get a chemistry or physics or engineering degree. Royal Roads will waste months of your time playing the Resilienceville Board Game, or a Resilience Photography Workshop. (The carbon imprints of your time and travel will not be calculated. Nobody would know how, anyway.)

Nobody needs a lot of education to understand the problem any more; it's in the daily weather report. (Today, heat records in Paris!) Everybody needs to jump past yakking about it and into actual work on it.

OMG, you annoy me. The

OMG, you annoy me. The technology and the know how is already there or can be imminently. What is missing is the political will and the mass waking up to get everyone to not only decrease their personal consumption and carbon footprints (ie reduce, re-use, recycle), but push the political/ corporate elite to act and fast! This lab and young people becoming leaders and activists in general is a very important tactic in the diversity of tactics needed. The technologists, etc are absolutely necessary, but not sufficient!

Quote: "The technology and

Quote: "The technology and the know how is already there or can be imminently. What is missing is the political will and the mass waking up to get everyone to not only decrease their personal consumption and carbon footprints (ie reduce, re-use, recycle), but push the political/ corporate elite to act and fast!"

It will be interesting to see the actual medium to long-term political impact of what Greta Thunberg is doing - particularly after she speaks to the UN in New York following her ground-breaking sailing voyage across the Atlantic, which finished a couple of days ago.