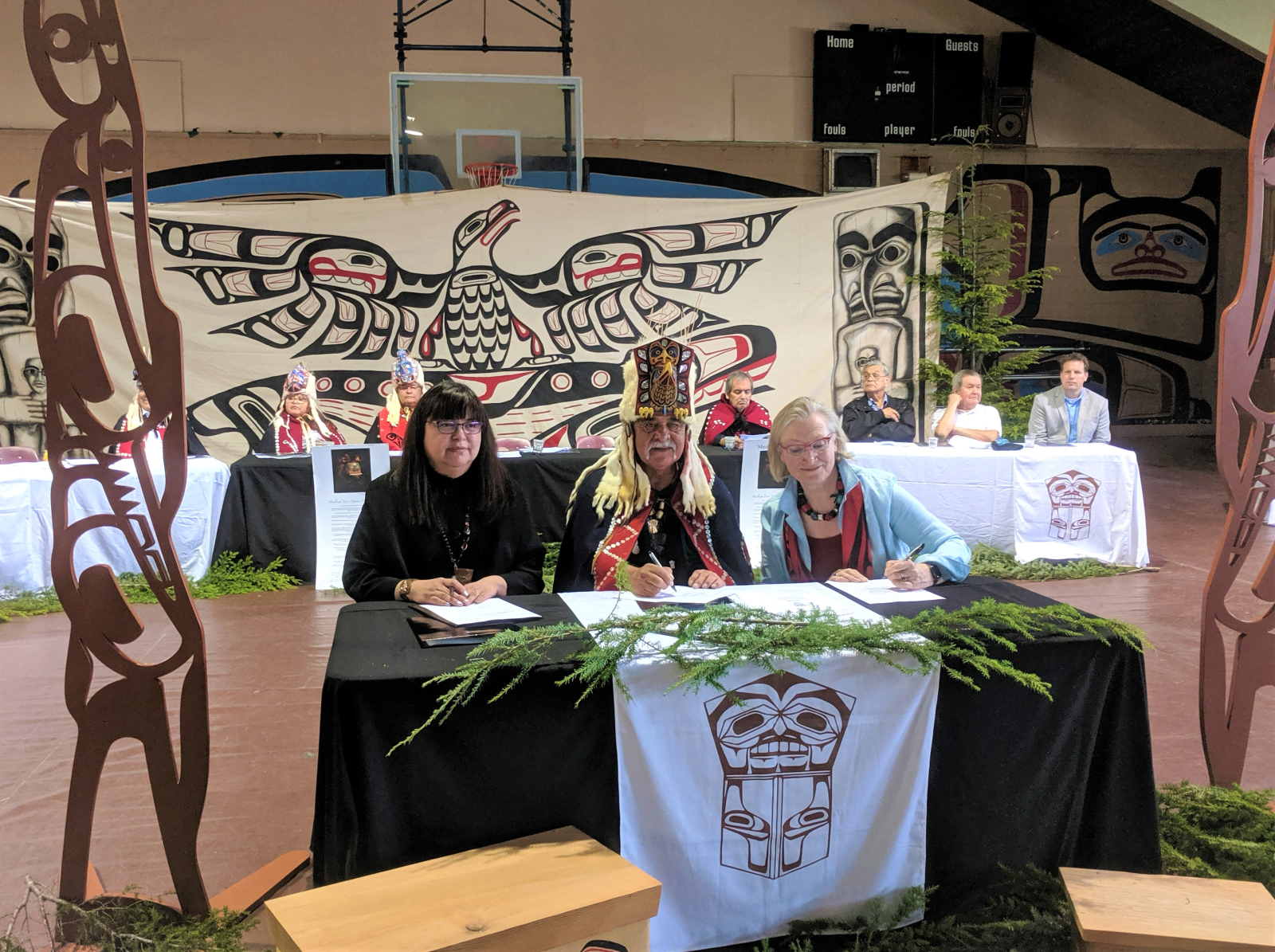 Haíɫzaqv elected and hereditary governments have signed a $37-million investment agreement with the Crown on Haíɫzaqv (Heiltsuk) territory.

The funds, announced Thursday, will be invested into four priority house posts, meaning four priority areas of investment. The house posts are self-government; housing and infrastructure; economic development; and language revitalization and preservation.

To Haíɫzaqv, these four house posts aren't only meant to support the community. They're meant to uphold the promise of reconciliation with Canada, and to help redress socio-economic imbalances caused by colonization.

The agreement is about asserting Ɫáx̌vái, which means Haíɫzaqv's “inherent jurisdiction that flows from (their) ownership of (their) lands,” while also engaging with the federal government.

"We all need to be able to coexist," Haíɫzaqv Chief Marilyn Slett said. "We also need to hold up our traditional laws and our traditional governance, because it's alive and well."

Slett said there is no word for reconciliation in the Haíɫzaqv language, so they called it Haíɫcístut, which means “to turn something around and make it right again.”

The agreement includes additional funds to support Haíɫzaqv fisheries through training, increased quota and licenses, and joint management of crab and salmon fisheries.

This three-year investment is part of a long-term agreement Haíɫzaqv and Canada signed in 2015, the Háɫcístut Framework Agreement for Reconciliation.

Bennett said it's important "that reconciliation must be defined by the people who were harmed."

The minister said the agreement could set precedent for how First Nations and the Crown can negotiate in the future, by including hereditary leadership and laws in decision-making, rather than only the elected band council.

Haíɫzaqv and Canada have signed a $40-million investment agreement. The agreement is called Haíɫcístut, which means 'to turn something around and make it right again.'

"This is an example of the community deciding what is necessary, and then Canada has to support them in their priorities, not only in what we do, but how we do it," Bennett said. "I think this is a new way of working nation-to-nation."

Slett said creating the agreement was three years of arduous work. She said it can be difficult to pursue the agreement when there are challenges in other communities, like inadequate water in Attawapiskat, or when RCMP raided a Wet'suwet'en checkpoint blocking access to the Coastal Gaslink pipeline project in January.

"We had talked about how what happens to them happens to us. That's how we feel," she said. "We were kind of questioning what we were doing. Our elders said we have to keep on track… and support our neighbouring nations, but we also have to do something for our people and uphold the lives of our Heiltsuk people."

She said she's looking forward to building a language centre, as well as new housing to address overcrowding.

New big house will be 'the heartbeat of our community'

By framing the agreement around four house posts, the parties are also paying tribute to another act of reclamation — building a Haíłzaqv λiác̓i, or Heiltsuk Bighouse, in Bella Bella. Slett said it's the first big house to be built on their territory in over 120 years.

Since Canada banned potlatches in 1880, the Haíłzaqv haven't had a traditional bighouse for ceremonies. Potlatches were made legal once again in the early 1950s, but Slett said people in the community weren’t aware the ban had been lifted and didn’t begin holding potlatches again until several years afterward.

"Right now, we practise our culture in a gymnasium," she said.

Following the 2015 agreement, the federal government committed $2.5 million that Haíłzaqv needed to complete the big house.

The north side of the #HaíłzaqvBighouse now has half a roof, and the south side is already done. The goal is to have the house tightened up before the fall weather sets in! Photo Credit: Eddie Jones pic.twitter.com/iA8SwhyuO7

Bennett said these actions show relations between Indigenous Peoples and Canada can go beyond the Indian Act.

"There is still, across the country, a misunderstanding that the only real accountability or fiscal accountability between Canada and First Nations would be the Indian Act. I think these agreements are legally binding, and it showcases Canada will be accountable to communities," she said.

After signing the investment agreement yesterday, the community took Bennett on a tour of the almost-completed building.

"They are finishing construction with the cedar, the artists are working on the front... It was really fantastic," Bennett said.

Slett said they plan to complete construction in October, and to hold an opening ceremony on Oct. 13.

"We're already strong and resilient, but I think this big house is also going to fill a space within us that we didn't know we had, a bit of a void without having big houses," Slett said.

"It's going to be the heartbeat of our community."

Agreements are positive gestures by definition, and reconciliation is an honourable mindset. However, in practical terms, please advise ( with help from the Minister) which abundant portfolio the $40M is coming from and articulate briefly the specific harm done that this investment will remedy. In relative terms and with practical sense, for Grassy Narrows to be struggling for decades towards finding a solution for life itself in having clean water, it is a puzzling contrast to our government's investment in the construction of a "big house." Should Canadians be imagining that the government's coffers are bottomless, or that priorities are established and acted on in the most logical order?

That amount is approximately

That amount is approximately .0001 per cent of the annual federal budget.
It's not going to break anything.

Woops. Shouldn't try to do

Woops. Shouldn't try to do math in my head when it's 84 deg F in here and stinking of city sewer coming in through the windows.
That's .009 per cent. Still isn't going to break anything.