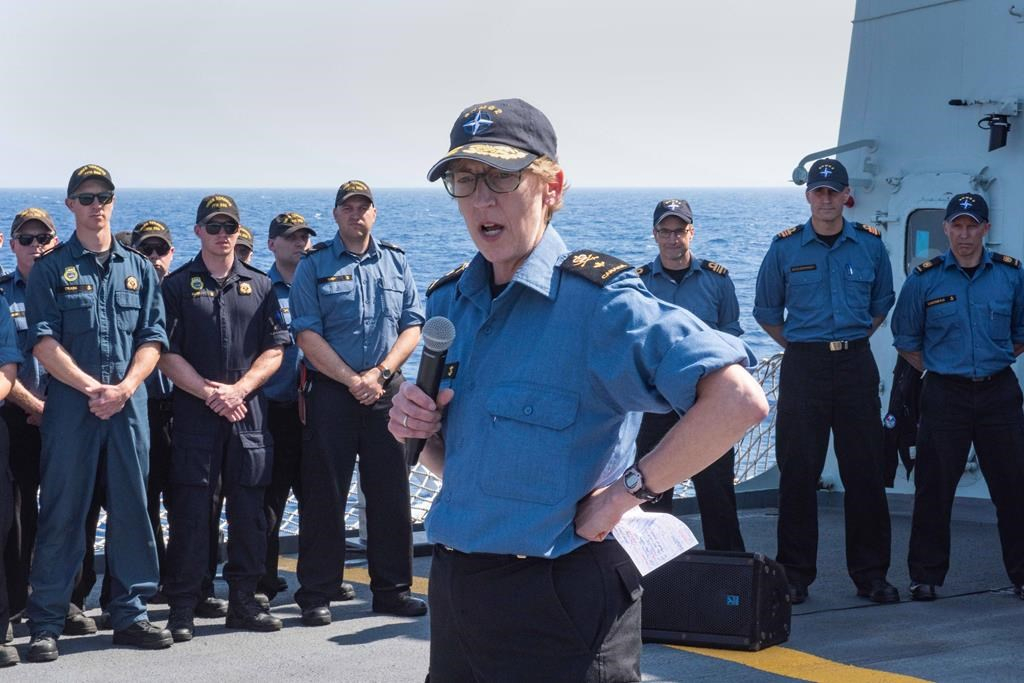 Standing NATO Maritime Group 2 Commander, Commodore Josée Kurtz addresses the crew of Flag Ship Her Majesty's Canadian Ship Toronto on the flight deck while in the Mediterranean Sea on June 21, 2019 in this handout photo by MCpl Manuela Berger, CAF
Previous story
Next story

Since mid-June, Kurtz has been in charge of Standing NATO Maritime Group Two, one of four naval groups operated by the 29-member alliance. The 51-year-old Navy officer from Joliette, Que., became the first woman to be given such a command in NATO history.

"I do think it sends a really strong signal to the newer generation of young people who want to do a military career, and I say that whether they are women or men, or any minority group," Kurtz said, in a telephone interview Wednesday from aboard HMCS Halifax off Rota, Spain.

Kurtz said her appointment, which runs until the end of the year, reflects the spirit of diversity in the alliance, which is composed of various cultures and military procedures.

"This appointment speaks to the value of diversity at the sailor end — at the people level," she said. "I think it's a tremendous opportunity and I hope that it sends a positive signal."

Kurtz said her naval group includes vessels from Great Britain, Turkey and Romania. Her fleet recently participated in two Black Sea exercises in a show of support for allies in the region, such as Ukraine and Bulgaria.

Kurtz said the NATO presence is important, and it offers Canadian sailors an opportunity to hone their training.

The first exercise, Sea Breeze 2019, was a multinational effort led by Ukraine and the United States. The second, called Breeze 2019, was led by Bulgaria. Kurtz said both were aimed at increasing NATO's readiness.

"It makes sense that from time to time we pay a visit in areas where some allies and partners have a coastline," she said.

Russia also has a coastline bordering the Black Sea. Kurtz said the Russians were aware of the exercises, which proceeded without incident.

Kurtz said her family had no connection to the military before she signed up to the navy in 1988. She said she wasn't even sure what branch of the military interested her, but joined the navy at a time when it was just "opening its doors to women at sea."

In 2009, she commanded her first vessel, the HMCS Halifax, her current flagship.

Kurtz said its "humbling" to have been singled out from among a group of competent and professional colleagues to head the NATO standing group.

"So I'm working really hard to make sure I can deliver on the responsibilities that were given to me and making sure that it reflects positively on my navy and my country," she said.