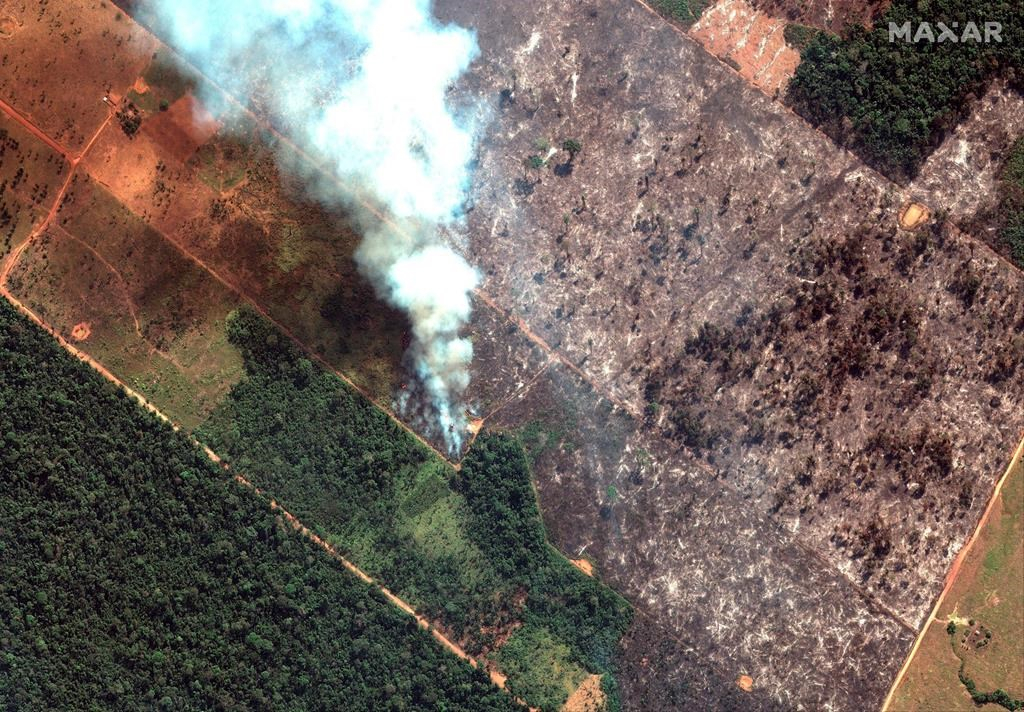 Some Canadian environment groups are urging Prime Minister Justin Trudeau to put the brakes on attempts to seal a free trade agreement with Brazil until stronger policies to protect the Amazon rainforest are in place.

Trudeau landed Friday in the French resort town of Biarritz for his final international summit before the fall federal election. The talks between the world's wealthiest developed economies are expected to include tensions with China, political unrest in Hong Kong and the nuclear deal with Iran, which is backed by Europe but opposed by U.S. President Donald Trump.

All of that, however, was upstaged by the fires burning in Brazil's Amazon rainforest, which are now the subject of an expected emergency session.

France and Ireland have already threatened to block the European Union's trade deal with the Mercosur trading bloc, saying Brazilian President Jair Bolsonaro's rapid deforestation of the Amazon has to stop. A record number of fires are burning there, threatening a habitat that supplies one-fifth of the Earth's oxygen and is home to one-fifth of its fresh water and half of all insect, plant and animal species.

The rainforest is also a substantial carbon sink, absorbing at least one billion tonnes of carbon dioxide every year, almost the same amount produced by Latin America.

"My heart is in my throat today thinking of the emergency the Amazon and the animals and people that live there are facing," Abreu said.

"One in every five breaths we breathe is produced in the Amazon. The Amazon is the heartbeat of the global hydrological cycle. Ecosystems worldwide will quite literally collapse if we fail to protect this incredible place."

Canada began trade talks in 2018 with the Mercosur bloc, a trading group that includes Brazil, Argentina, Paraguay and Uruguay. The sixth round of talks took place in June and the Canadian government issued a preliminary gender-based analysis of such a deal Friday.

In a tweet late Thursday, Trudeau agreed with French President Emmanuel Macron that an emergency debate was needed.

“We did lots of work to protect the environment at the G7 last year in Charlevoix, and we need to continue this weekend," he said. "We need to act for the Amazon and act for our planet — our kids and grandkids are counting on us.”

But there has been nothing specific from Trudeau on what Canada might do.

U.K. Prime Minister Boris Johnson has offered help to fight the fires — Brazil says it doesn't have the resources to do it on its own, though Bolsonaro said Friday he may send in the country's military to help.

Bolsonaro has accused the G7 of acting colonialist in wanting to talk about Brazil without him or an emissary at the table. He has also denied his policies to expand farming and mining are at fault, and even suggested non-governmental organizations who want to blame his government lit the fires themselves. He later walked back that accusation slightly.

Greenpeace International executive director Jennifer Morgan says the G7 leaders can't use the Amazon fires to distract from their own failures to do enough to reduce climate change at home.

A report card issued this week by Climate Action Network International said the G7 countries are all lagging on acting to cut their own emissions.

Shane Moffatt, head of the nature and food campaign for Greenpeace Canada, said every country needs to think globally but act locally when it comes to reducing greenhouse gases and protecting forests.

"Just this week, a new report came out warning us that bigger, hotter wildfires are turning Canada's vast boreal forest into a significant new source of climate-changing greenhouse gases," he said. "This means that Canada should be showing much greater leadership in protecting our forests here at home. Right now, Canada is dead last among G7 nations in protecting our lands and freshwaters."

Brazilian leader at odds with Davos focus on environment