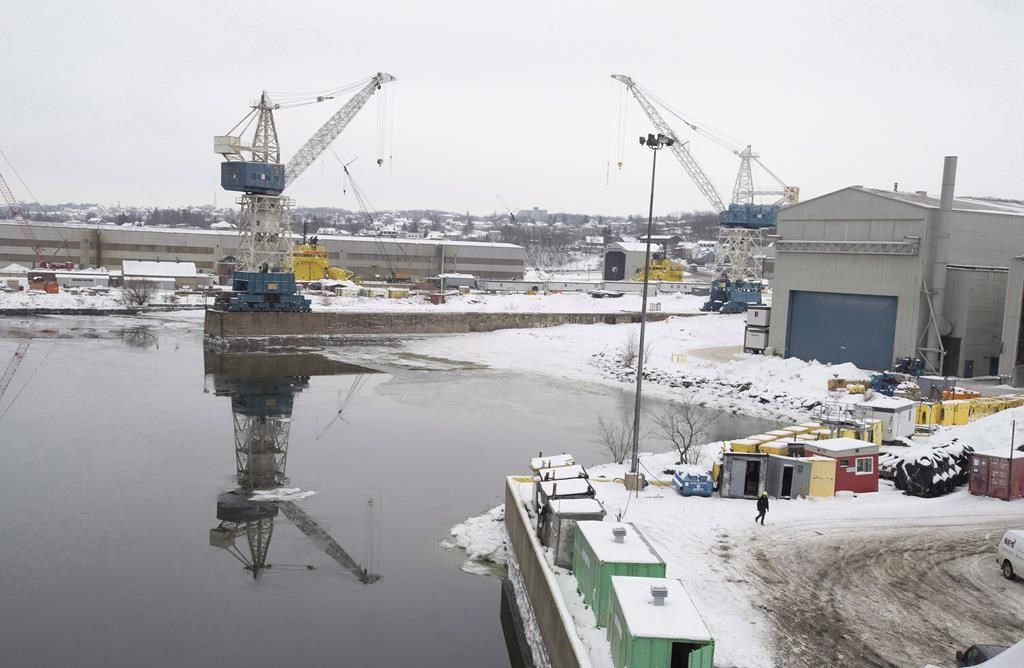 An overall view of the Davie shipyard is shown on Friday, December 14, 2018 in Levis, Quebec. File photo by The Canadian Press/Jacques Boissinot
Previous story

An Ontario shipyard is accusing the federal government of trying to unfairly award Quebec's Chantier Davie shipyard potentially billions of dollars in work without a competition.

The allegation is contained in a complaint from Hamilton-based Heddle Marine to the Canadian International Trade Tribunal over the government's search for a third shipyard to add to its multibillion-dollar shipbuilding strategy.

The winning yard, which will join Halifax's Irving Shipbuilding and Seaspan Marine in Vancouver in the massive naval procurement process, will be tasked with building six new icebreakers for the Canadian Coast Guard.

However, Heddle alleges in its complaint that many of the requirements the government says shipyards must meet to qualify for consideration are not legitimate or reasonable — and will disqualify virtually every yard but Davie.

Heddle, which in recent years purchased the Thunder Bay shipyards and the Port Weller dry docks, is asking the tribunal to order the removal of the requirements or the launch of a new search process.

The federal procurement department has not responded to questions posed to it Friday. Davie declined to comment.

Davie, which received several federal contracts without a competition in recent years and whose surrounding area is likely to be hotly contested in the fall federal election, has previously expressed confidence it will become the third yard.

One of the requirements flagged by Heddle, which has previously focused on the repair and maintenance of ships, is that qualifying shipyards must have a contract now or recent experience in building a ship weighing more than 1,000 tonnes.

"No shipyard in Canada that is eligible to apply for the contract is capable of satisfying this requirement except Chantier Davie Canada," the complaint reads.

Qualifying shipyards must also be able to launch vessels wider than 24 metres, which Heddle says disqualifies all Ontario-based shipyards because vessels must be 23.8 metres or less to traverse the St. Lawrence Seaway.

Yet Heddle says that requirement doesn't make sense because the icebreakers the third shipyard will be tasked with building must be able to access the Great Lakes — meaning they must be able to fit through the Seaway.

Those requirements and others "appear to pre-determine and/or unduly favour Davie as a qualifying supplier and unreasonably disqualify all other shipyards, but specifically Ontario-based shipyards," the complaint reads.

Heddle also takes issue with a lack of industry consultation before the search was launched on Aug. 2, and the 15-day deadline shipyards were given to respond. The deadline was later extended to Aug. 26.

There are also concerns about comments made by a Davie official and Prime Minister Justin Trudeau when he announced the government's plan to add a third shipyard to the national shipbuilding strategy.

"We recognize that it's an opportunity for Davie to apply to become that third shipbuilding facility because there will be a tremendous amount of work in the coming years," Trudeau said in May.

Despite complaining to the trade tribunal and concerns about a bias toward Davie, Heddle president Shaun Padulo told The Canadian Press his company still plans to apply to the government's search for a third shipyard.

Padulo credited Davie, with help from the Quebec government, for successfully securing contracts for an interim support ship for the navy, three second-hand icebreakers and two ferries from the federal government in recent years — all without a competition.

"It was really well done," Padulo said, before adding: "I get that Davie has been excellent lobbying, but at a certain point, the government has to realize this whole process has to be fair."

The Thunder Bay shipyard and Port Weller dry dock were at one time premier shipbuilding facilities in Canada, Padulo said. While Heddle has started to rebuild that capacity, "a project like this would help us resuscitate those yards," he said.

The company also has recent experience working on the CCGS Terry Fox icebreaker last year while the CCGS Pierre Radisson is currently with the shipyard for a life extension, though Padulo said what has been missing is stability.

"We're extremely busy in the winter, to the point where last year we had to turn away over $10 million worth of work because we didn't have the capacity at that time to do all the work required within the three-month period," he said.

University of Calgary shipbuilding expert Timothy Choi agreed the requirement the third shipyard be able to build ships wider than 24 metres seems to be a contradiction given the vessels need to be able to traverse the St. Lawrence Seaway.

Choi said the only explanation — "that is, aside from explicitly crowning Davie," he wrote in an email — is the government plans to award the CCGS John G. Diefenbaker polar icebreaker to the third shipyard.

The Diefenbaker, which will be Canada's largest icebreaker and not expected to work in the Great Lakes, was taken from Seaspan in Vancouver in May, but is not one of the six icebreakers slated to be built by the third yard.