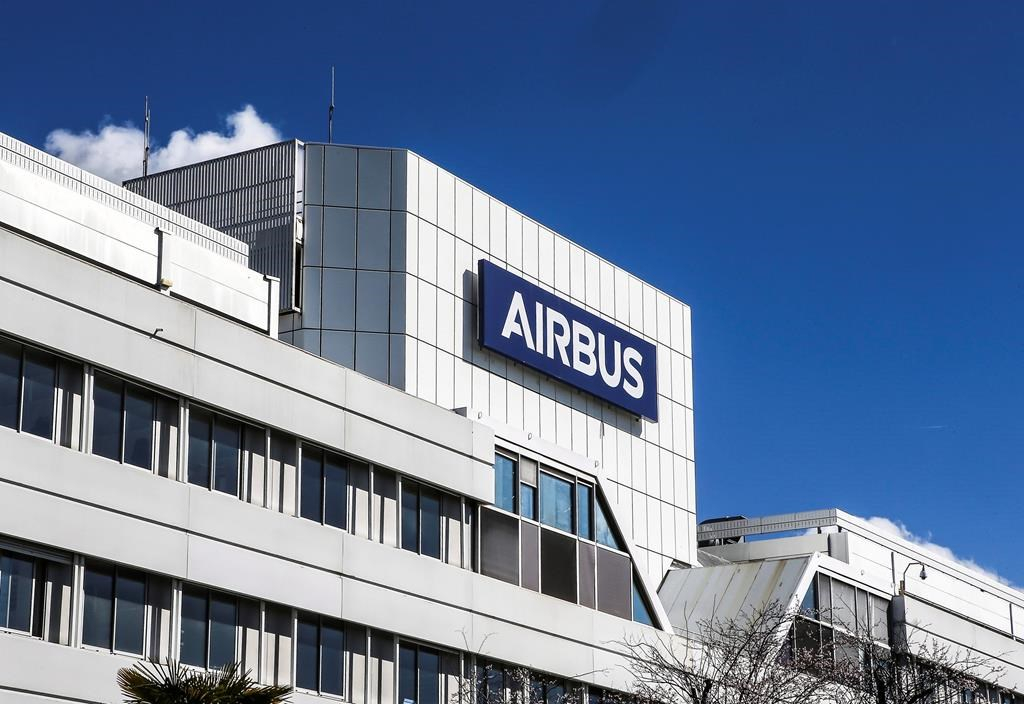 This March 6, 2018, photo shows a logo of Airbus group is displayed in front of its headquarters in Toulouse, western France. File photo by The Associated Press/Fred Scheiber
Previous story

Canada's multibillion-dollar effort to buy new fighter jets has taken another surprise turn with European aerospace giant Airbus announcing it has withdrawn from the high-stakes competition.

Airbus Defence and Space, in partnership with the British government, was one of four companies expected to bid on the $19-billion contract to build 88 new fighter jets. They're to replace the Royal Canadian Air Force's aging CF-18s.

But in a statement Friday, Airbus said it had notified the Canadian government of its decision to withdraw its Eurofighter Typhoon for two reasons — both of which it had raised before the competition was formally launched in July.

The first relates to a requirement that bidders show how they plan to ensure their planes can integrate with the top-secret Canada-U.S. intelligence network known as "Two Eyes," which is used to co-ordinate the defence of North America.

Meeting the requirement continues to place "too significant of a cost" on non-U.S. aircraft, said Airbus, which would have been required to show how it planned to integrate the Typhoon into the Two-Eyes system without knowing the system's full technical details.

The second factor was the government's decision to change a long-standing policy that requires bidders on military contracts to legally commit to invest as much money in Canadian products and operations as they get out of contracts they win.

With the new process, bidders can instead establish "industrial targets," lay out a plan for achieving those targets and sign non-binding agreements promising to make all efforts to achieve them. Such bids do suffer penalties when the bids are scored but are no longer rejected outright.

In its statement, Airbus said the new approach "does not sufficiently value the binding commitments the Typhoon Canada package was willing to make, and which were one of its major points of focus."

Airbus is the second company to pull its fighter jet from the competition after Dassault withdrew its Rafale last November. That leaves Lockheed Martin's F-35, Boeing's Super Hornet and Sweden's Saab Gripen in the running.

Boeing and Saab have both previously raised their own concerns about the changed industrial-requirement policy, arguing it will shortchange taxpayers and Canada's aerospace and defence industry.

Despite its decision to withdraw, Airbus expressed appreciation to the public servants organizing the competition for their "commitment to transparency throughout the last two years as well as the thoroughly professional nature of the competition."

Procurement Minister Carla Qualtrough came out in defence of the government's approach to the fighter-jet competition following news of Airbus's withdrawal, which included "adapting the economic-benefits approach to ensure the highest level of participation among suppliers."

"Strong economic outcomes are a priority for this project," Qualtrough said in a statement, "and we are confident that this investment will support the growth of Canada's highly skilled workforce in the aerospace and defence industries for decades to come and create significant economic and industrial benefits right across the country."

Companies are expected to submit their bids next winter, with a formal contract signed in 2022. The first plane won't arrive until at least 2025. Successive federal government have been working to replace Canada's CF-18s for more than a decade.

While meeting the Two-Eyes security requirements was always going to be a challenge for the non-U.S. companies, defence analyst David Perry of the Canadian Global Affairs Institute said government officials had hoped Airbus would figure it out.

That is because the United Kingdom had already managed to integrate the Eurofighter Typhoon into Canada's other major intelligence-sharing alliance, the Five-Eyes partnership whose members include the U.K., the U.S., Australia and New Zealand.

(The institute where Perry works, which is registered as a charity, receives funding from multiple sources. Those include the Department of National Defence, Boeing and Lockheed Martin.)

As for the changed industrial policy, Perry said there are legitimate complaints about how the government rolled it out only in recent months despite knowing for years that some accommodation would be needed to allow the F-35 to compete.

"The way that it happened was not something that sat very well with the other people who started out on the process on the understanding that the full (industrial-requirements) policy was going to be applied in this procurement," he said. "That change happened quite late in the process."

Conservative defence critic James Bezan, however, pointed to Airbus's withdrawal as proof the Liberal government has mismanaged the fighter-jet file during its time in government, which included waiting four years to launch a promised competition.

"While other countries have selected fighter jets in under two years, (Prime Minister Justin) Trudeau's record on military procurement is one of delays and failures," said Bezan.

The previous Conservative government announced a plan to buy F-35s without a competition in 2010, but backed off that plan two years later following questions and concerns about the stealth fighter's costs and capabilities.