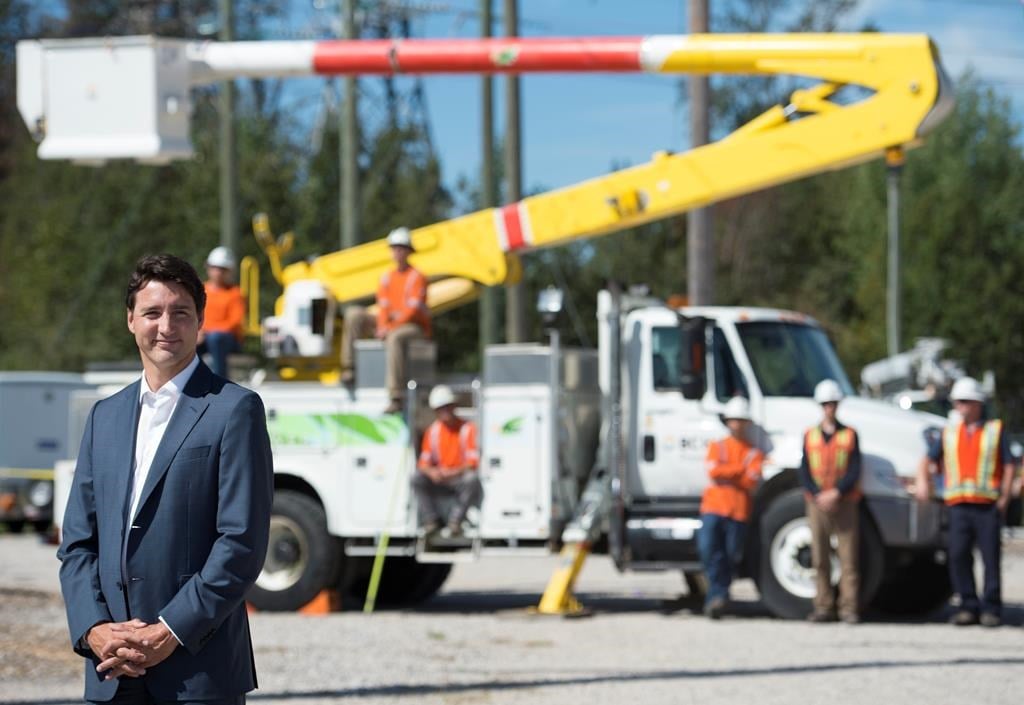 Prime Minister Justin Trudeau is seen prior to making an announcement at BC Hydro Trades Training Centre in Surrey, B.C., on Thursday, August, 29, 2019. Photo by The Canadian Press/Jonathan Hayward
Previous story
Next story

The federal and British Columbia governments want to power the production of the natural gas industry in the province using electricity.

As part of an agreement announced Thursday, the two governments and BC Hydro are forming a committee to push projects that increase power transmission.

Prime Minister Justin Trudeau said the agreement is aimed at reducing greenhouse gas emissions from the natural gas industry, which produces about 18 per cent of the carbon pollution in the province.

"We're taking another major step forward in the fight against climate change," he said, adding that electrification will also create jobs.

B.C. Premier John Horgan joined Trudeau in making the announcement at a BC Hydro training centre in Surrey, saying the two governments are working to make the economy more environmentally sustainable.

Horgan said the agreement also takes advantage of BC Hydro's ability to provide clean energy for industry in the province.

"Our governments are working collaboratively to electrify industries and reduce emissions as we put B.C. on a path to a cleaner, better future," he said in a statement.

Environmental groups have criticized Horgan's NDP government for its backing of the liquefied natural gas industry in B.C., arguing changes to the province's tax structure and subsidies are helping a sector that increases carbon pollution.

The federal and provincial governments have boosted LNG Canada's plans for a $40-billion project in Kitimat, which is expected to create 10,000 construction jobs and up to 950 permanent positions in the processing terminal on the coast of B.C.

The three-page agreement says $680 million in "near-term" electrification projects are being considered for possible funding.

B.C. Green Leader Andrew Weaver said the deal and the province's financial commitment to it is a further subsidization of fossil fuel development, including for projects that have not yet been built.

"The NDP government is not only providing more subsidies for the growth of the fossil fuel sector but are also neglecting their responsibility to this province to be making the investments for an alternative future," he said in a news release.

Weaver said he supports the electrification of industry, but it must go beyond providing help for the gas sector.

"British Columbians are looking for leadership that is investing in their future by supporting the industries of tomorrow, not the dinosaurs of yesterday."

Merran Smith, executive director of Clean Energy Canada, said in a statement that the agreement delivers a critical component to B.C.'s climate plan.

"Electrification is the thread that ties all climate efforts together. Powering our cars, our homes and our industries with clean electricity is the only sustainable path forward."

What this means is that the

What this means is that the Site C dam on the Peace River, and the flooding of prime agricultural land that had been held by farming families for generations, along with burial and other spiritually significant sites of the First Nations local to that area, is built to finance the pipeline that the people of Terrace, all the surrounding communities and First Nations, rejected.
And no doubt all the crooked science, especially around environmental studies, that was described in an article here not long ago around the petroleum industry applies equally to natural gas extraction.
Sounds like the lesson is What fossil fuel wants, fossil fuel gets.
(When they're calculating GWG gas reductions, I wonder if they're counting the methane from all the flooded-out trees. On second thought, how ridiculous of me to wonder if they'd even consider doing so ...)
Yep. The taxpayers pay for the dam, for the expropriation of fellow citizens' property, for running roughshod over everyone in the way, doubtless also in direct subsidies, and what do we get for it? Lost opportunity to make renewables happen.
Somehow, I don't feel like cheering.

Yes, from what little I know,

Yes, from what little I know, just "kicking the can down the road" and doing nothing to lessen our impact on the Environment, that so far is negative and growing exponentially .