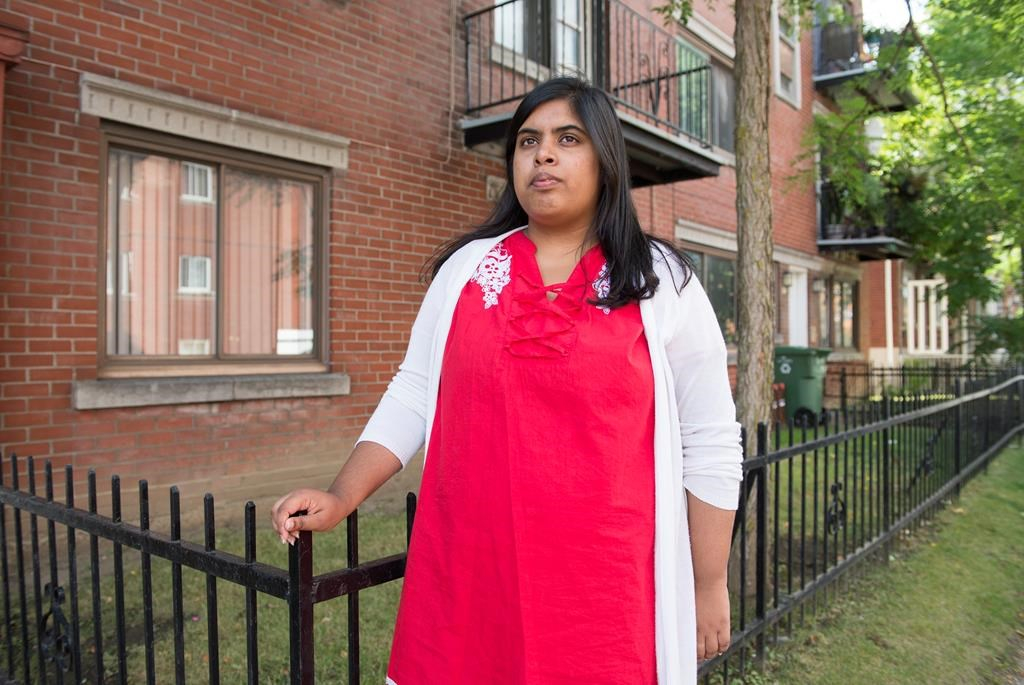 Samiha Hassain poses on a street in the Montreal neighbourhood of Parc-Extension, on Saturday, August 31, 2019. Photo by The Canadian Press/Graham Hughes
Previous story
Next story

Residents of Montreal's Park Extension warn that evictions are on the rise amid gentrification in the province's poorest neighbourhood.

Tenants and community advocates gathered at Parc Saint-Roch Saturday to raise awareness, build solidarity and swap cautionary tales as a sprawling new university campus prepares to open its gates down the street.

Samiha Hossain, 23, has lived for two decades in the same apartment, where incoming tenants now pay nearly twice what her family does.

She said several family friends have been evicted from other buildings for renovations. One landlord halved the size of the apartments to double the number of units while boosting the rent, “because they’re beside a campus that’s opening soon and more students can come in.

"We're one of the poorest neighbourhoods in Canada, but we’re definitely rich in solidarity and community links, and in diversity," Hossain said. "We still have to remember that and be proud that."

At the park party, a band blared out Punjabi pop music to the beat of a dholak drum as locals danced, despite having just chowed down on pakoras and chickpea dal.

Cut off from the rest of the city by two train lines, a highway and the Town of Mount Royal — an affluent suburb embedded within Montreal — Park Extension has been a haven for immigrant and cultural communities since the 1950s, when Italian newcomers started to settle there, followed by Greeks and then Indian, Pakistani and Bangladeshi residents.

Relatively insulated from the gentrification affecting nearby Montreal districts like Mile End and the Plateau, Park Ex counts three-quarters of its households — which earned $38,000 on average in 2016 — as renters, according to Statistics Canada.

However, the past year has seen a ramp-up in housing repossessions, "renovictions" and excessive rent hikes, said Amy Darwish, an organizer with Comite d’action de Parc-Extension, a community group.

"Often a new landlord will come and will try to raise the rent by sometimes up to $100 immediately afterwards," she said, noting that some landlords now rent exclusively to students in order to increase turnover and allow bigger rent increases.

"A lot of this seems to be getting steadily worse with the impending arrival of the new University of Montreal campus," she added.

The land-starved university, whose satellite campus is set to open this fall with a massive new science complex on the edge of Park Ex, has said it is sensitive to how its new quarters will impact local residents.

The campus will initially serve about 2,000 students, a number expected to grow nearly five-fold over the next two decades as part of a burgeoning artificial intelligence hub.

Christine Pare, the newly named NDP candidate for Papineau — Prime Minister Justin Trudeau's riding — stressed that "the problems of gentrification are real" and called for more funding for subsidized housing.

"People are being evicted from their homes," she said Saturday. "Since I've lived in this neighbourhood, rents have tripled in five years. They were about $500 a month. The same homes in Park Ex now cost about $1,000, $1,500 a month."