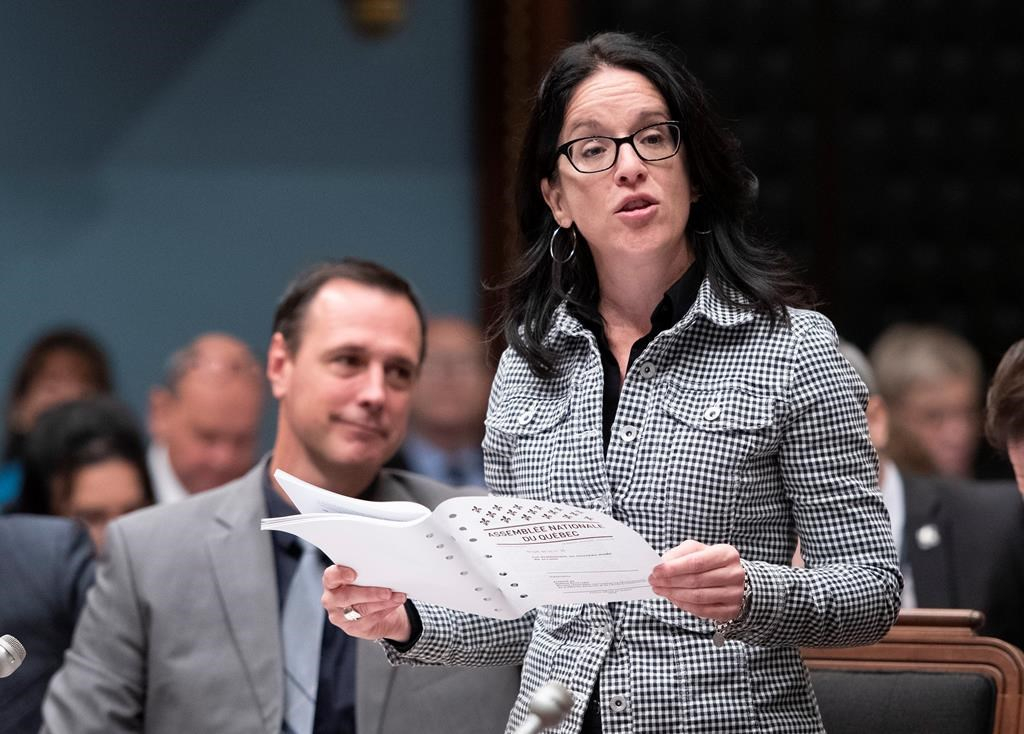 Sonia Lebel tables Bill 39, an Act to establish a new electoral system, on Sept. 25, 2019 at the legislature in Quebec City. Photo by The Canadian Press/Jacques Boissinot
Previous story
Next story

Quebecers will decide during a referendum held in conjunction with the 2022 provincial election whether to change how they vote in future elections.

The Legault government tabled an electoral reform bill that proposes abandoning the first-past-the-post system in favour of mixed proportional representation with regional compensation.

Justice Minister Sonia LeBel tabled Bill 39 on Wednesday after admitting earlier this month that having a new system in place for the next election, as promised, would be impossible.

Under the Quebec bill, the province would continue to have 125 seats in the provincial legislature, 80 of which would be held by members elected according to the current system — albeit in geographically bigger ridings similar to their federal counterparts.

The other 45 seats would be divided among the parties based on how many votes they receive in each of 17 wider electoral regions with two exceptions: Iles-de-la-Madeleine and Ungava.

During last year's provincial election campaign, Premier Francois Legault promised to introduce electoral reform during a first mandate — a commitment he first made in May 2018 while in opposition.

Until recently, Legault had categorically rejected the referendum scenario. But the premier admitted Wednesday he underestimated the magnitude and complexity of the changes involved.

"We are never wrong, in a democracy, when we consult the population," Legault said. "Such a fundamental reform must be decided by Quebecers themselves."

Putting the proposed change to a referendum vote is a risky proposition at best. Electoral reform referendums held in other provinces over the years, including Ontario, British Columbia and P.E.I., have failed to change the status quo.

So voters will be asked to cast a second ballot at the polls in 2022, answering the yes or no question: "Do you agree with the replacement of the first-past-the-post system by the mixed voting system with regional compensation provided by the act establishing a new voting system?"

To go ahead, the reform would require a simple majority of 50 per cent plus one of the population.

Under the proposal, a party must would have to obtain at least 10 per cent of the popular vote to participate in the division of the 45 regional seats.

Last October, the Coalition party garnered 37 per cent of the popular vote but won 59 per cent of the seats in the National Assembly. Legault agreed the proposed reform would favour the election of minority governments, thereby forcing greater collaboration among parties.

The complex bill tabled on Wednesday ran about 100 pages with 227 articles, which will make the analysis and consultation process arduous. Legault noted however that the Parti Quebecois and Quebec solidaire have both previously supported the idea of a reform, and he hopes to have their support.

The Quebec Liberals are opposed to the idea.

This report by The Canadian Press was first published Sept. 25, 2019.