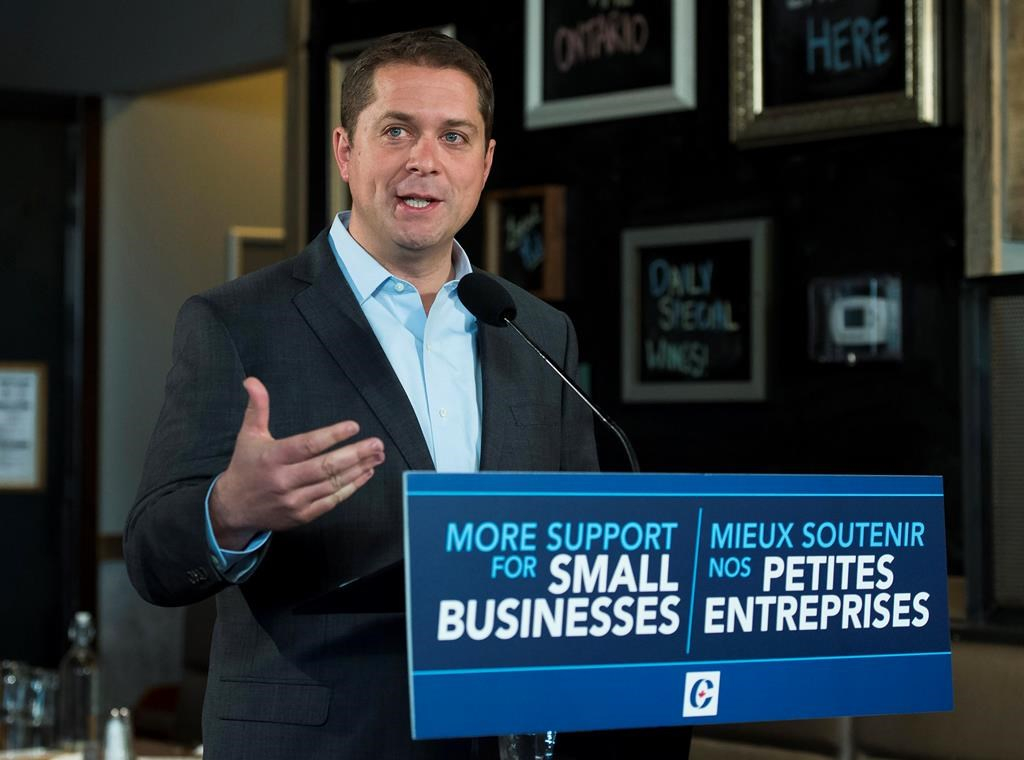 Liberal Leader Justin Trudeau said Thursday the political instability in the United States and Britain serves as a warning to Canadian voters to avoid the pull of divisive populism that he accuses his Conservative opponents of fostering.

Conservative Leader Andrew Scheer, meanwhile, raised the SNC-Lavalin drama that has dogged Trudeau in the past by promising a new law to investigate "sleazy" politicians to hold his opponent to account.

Trudeau linked the impeachment drama unfolding in the U.S. and the Brexit agony rocking the U.K. to the "politics of fear" that he says Scheer is bringing to the current Canadian federal election.

While he did not mention President Donald Trump or Prime Minister Boris Johnson by name, Trudeau continued to link Scheer to other Conservative politicians, such as Ontario Premier Doug Ford and former prime minister Stephen Harper.

Trudeau said Scheer is running on the same failed policies of Harper from the 2015 campaign that brought the Liberals to power.

"Some of the consequences of the populist tendencies that we've seen over the past few years in places like the U.K. and the United States are clearly on display for Canadians right now," Trudeau said in the Lake Laurentian Conservation Area in Sudbury, Ont. after announcing a series of new environmental conservation measures.

Conservative Leader Andrew Scheer fired back by promising a Conservative government would launch a judicial inquiry into the SNC-Lavalin affair.

Scheer made the announcement in Trudeau's Montreal riding of Papineau, saying an inquiry would finally provide Canadians the answers they deserve about the government's involvement in SNC-Lavalin's criminal prosecution.

"It's a cover-up on an historic scale," said Scheer.

Scheer said he would introduce legislation that would allow the RCMP to ask the Supreme Court of Canada for access to information protected by cabinet confidence, saying it would prevent politicians from hiding behind the current system of protecting frank and open discussions among ministers.

"The measures I've announced today and others I will announce later in the campaign will safeguard our democracy against the whims of sleazy and unscrupulous politicians."

Scheer was speaking at Jarry Park in Montreal's east end, and was to accompany Conservative candidates in what have historically been among the safest Liberal ridings in the city: Mount Royal and Saint-Leonard-Saint-Michel.

Mount Royal has gone for the Liberals in every election since 1940; it was the seat of Liberal Leader Justin Trudeau's father Pierre for nearly 20 years.

Saint-Leonard-Saint-Michel has elected Liberals since it was created in the 1980s, though its three MPs have been Alfonso Gagliano, a minister brought down in the sponsorship scandal of the early 2000s; Massimo Pacetti, whom Justin Trudeau expelled from the Liberal caucus in 2014 over allegations he'd harassed another MP; and Nicola Di Iorio, who stopped showing up in the House of Commons before eventually resigning last winter.

Still, Conservatives have never come close to winning there.

Green Leader Elizabeth May is also in Montreal on Thursday, as the third week of the federal election campaign begins.

May is to speak in the afternoon about the role she sees Quebec playing in the Greens' vision of a Canada powered by renewable energy.

Trudeau continued a string of environment-related announcements — promising to protect one-fourth of Canada's lands and oceans by 2025, along with measures to help low-income families go camping in a national or provincial park — before whistle-stopping his way southeast to a rally in Peterborough, where cabinet minister Maryam Monsef is fighting to keep her seat.

The NDP's Jagmeet Singh is spending a third day in a row in British Columbia, talking mainly about housing in events on Vancouver Island. He's playing defence: Vancouver Island is where the Greens see their best chances of picking up seats, after a byelection win over the New Democrats in Nanaimo-Ladysmith last May.

Singh is starting in Campbell River and plans to roadtrip south to Nanaimo.

And Maxime Bernier of the People's Party continues his own trip to the West, spreading his populist message in Calgary after spending Wednesday in Vancouver.

And yet, who left us

And yet, who left us vulnerable to the spectre of a populist with the support of less than half the voters winning 100% control of Parliament? Oh right, that was Justin Trudeau, who decided that our current electoral system is just fine, as long as it returns a majority government for his party. Harrumph.

Plain and simple...Trudeau is correct. Words and actions on the right (including mainstream media) DO foster populism and division. How many examples do people need for crying out loud!

Plain and simple...Trudeau is correct. Words and actions on the right (including mainstream media) DO foster populism and division. How many examples do people need for crying out loud!

Climate change the sword, as Liberal and Conservatives battle for power