As climate enters the spotlight at 100 debates across Canada, so does race 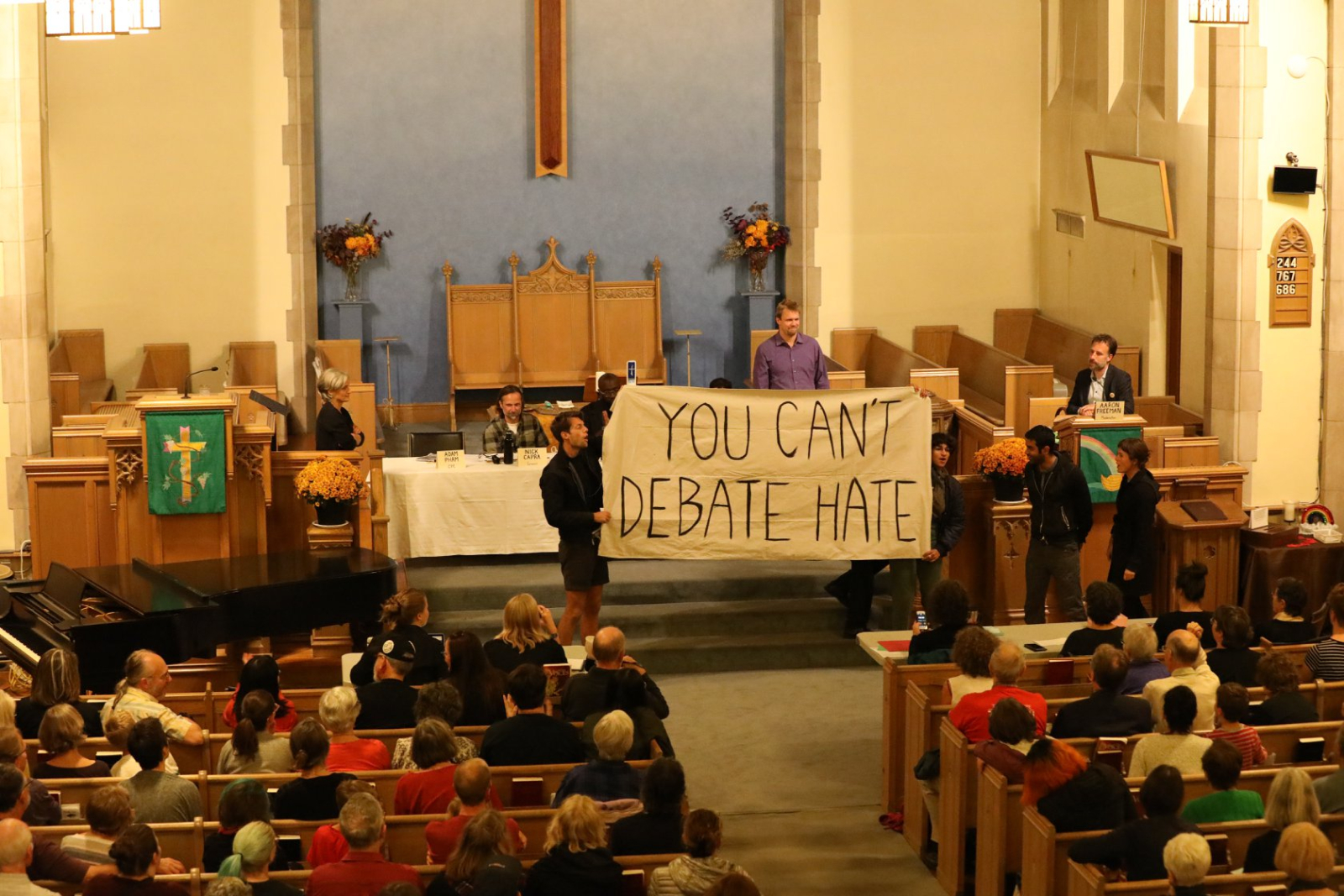 Protesters at a 100 Debates for the Environment event in Toronto on Oct. 2, 2019. Photo courtesy Franck La
Previous story
Next story

As the climate crisis took centre stage at more than 100 candidates' debates across Canada on Thursday night, candidates who deny climate change and advocate against diversity were at more than a third of them.

The debates ⁠— part of an event called 100 Debates for the Environment, organized by the non-profits GreenPAC and Équiterre ⁠— were a grassroots response to the lack of an official climate-focused debate. In total, 105 debates with 386 candidates were scheduled to happen Thursday night.

“It's taken a lot of work to get this whole thing done,” GreenPAC spokeswoman Kate Belmore said in a phone interview.

“It's such an issue on the minds of voters, especially on this election."

The People's Party of Canada (PPC) — which denies the existence of climate change, dropped a candidate who asked leader Maxime Bernier to speak out against racism and advocates against diversity — has 45 candidates attending local debates, more than the Conservatives' 42. (The Conservative party didn't respond to a request for comment.)

The Green party has 96 candidates attending their local debates, the most of any party. Ninety-four Liberals are participating, along with 89 NDP candidates and 20 from the Bloc Québécois.

This election, climate is a top priority for the first time. But this campaign has also been a reckoning on racism.

The sitting prime minister has admitted to multiple incidents of brownface and blackface. The NDP leader is the first racialized candidate for prime minister and is constantly fending off racist encounters. The Conservative leader is standing by candidates with histories of racist statements. Meanwhile, the PPC has enough support to be included in the official federal leaders' debates.

The latest manifestation of this happened Wednesday night at a 100 Debates for the Environment event in the west Toronto riding of Parkdale-High Park. (While connected to the debates happening Thursday, this one was held a day early.)

Protesters there interrupted PPC candidate Greg Wycliffe, chanting “No hate, no fear, refugees are welcome here,” reported Julia Duchesne, a journalism student who was at the event. The protesters also unfurled a banner with the words “You can’t debate hate.”

Later, the NDP and Green candidates turned their backs on Wycliffe. In response, the PPC candidate said the event wasn’t the time or place to air their concerns.

"We cannot talk about climate change without talking about racism and colonialism," said Anna Malla, who helped organize a protest against a PPC candidate's inclusion in a local #100debates event. #cdnpoli #elxn43

Anna Malla, a Parkdale-High Park resident who helped organize the protest but wasn’t present Wednesday night, said a climate debate is actually a crucial time to discuss race. People of colour ⁠are disproportionately affected by the climate crisis, she added ⁠— especially people forced to relocate after climate-related natural disasters and Indigenous people in Canada, who are often on the front lines of the fight for climate action.

“We cannot talk about climate change without talking about racism and colonialism,” she said.

'It speaks to where Canadian politics are at’

There is no official climate debate ahead of voting day. The federally appointed Leaders’ Debates Commission ⁠— which is tasked with organizing one English-language debate and one in French, both on a range of issues ⁠— has said it wouldn’t host more than the two outlined in its mandate.

In August, a group of environmental activists delivered a nearly 48,000-signature petition to the CBC’s Toronto headquarters, demanding the public broadcaster fill the gap by hosting its own climate debate. CBC redirected back to the debates commission.

“These debates need to happen,” Malla said. “They need to happen in a way that doesn’t cause harm to people and platform racists.”

Here is a video of the people who interrupted People’s Party candidate Greg Wycliffe in his introduction. His response? This is not the forum to address their concerns. pic.twitter.com/2f3EgyaVbD

Before Wednesday's event in Parkdale-High Park, the protesters had asked the non-PPC candidates to refuse to participate if Wycliffe was allowed to speak. They also tried to talk to local organizers about their concerns.

“We would have liked to see them take a stronger stance,” Malla said. “It speaks to where Canadian politics are at.”

This isn’t just a problem at the 100 Debates, she added. It’s a problem for local candidate forums in all of Canada’s 338 ridings.

In an email, Belmore said local organizers for the 100 Debates were encouraged to invite whoever they chose.

“However, 100 Debates recommends all debate hosts follow the rules set by the national debates commission, which sets the rules for the national leaders’ debates,” Belmore said.

“We have been very transparent from the start that 100 Debates’ general format is to follow the national Leaders' Debates Commission, the public entity specifically created to establish fair rules for the national debates that balance these concerns.”

The PPC’s anti-immigrant rhetoric amounts to hate speech, Malla said, which is linked to higher rates of violence against people of colour. This creates a hostile environment for non-white people who want to participate, she added, and it’s up to communities to make it clear that they won’t stand for racism.

“(People of colour) have been watching the lead-up to these elections with a lot of fear,” she said.

“Instead of talking about real, fundamental issues around climate... we feel frightened.”

At a debate Thursday night in Toronto Centre ⁠— Finance Minister Bill Morneau’s riding ⁠— race was the subject of one of its most heated exchanges. Morneau wasn’t there, but Adam Vaughan, the Liberal candidate for another downtown riding, took his place and said Morneau had a prior commitment made “before the election.” (The Conservative candidate declined to come, and the PPC isn’t running a candidate in the area.)

Green candidate Annamie Paul and NDP candidate Brian Chang did their best to poke holes in the Liberal plan ⁠— “The trees that you’re planting won’t cover up the pipeline you purchased,” Chang quipped ⁠— while Vaughan tried to sell his party’s platform as “practical.”

Chang focused most heavily on the intersection of race and environment, drawing attention to mercury poisoning in the Ontario First Nations community of Grassy Narrows and air pollution in the southern Ontario First Nation of Aamjiwnaang, both caused by nearby industrial activity. Vaughan mentioned the effects of the climate crisis on Indigenous communities in the North, and Paul highlighted Prime Minister Justin Trudeau’s brownface/blackface scandal.

But in what might’ve been the most lively exchange, the candidates sparred over Grassy Narrows, and the current government’s failure to deliver a long-promised treatment facility for mercury poisoning. “Time’s up,” Paul said, interjecting as Vaughan said the federal government was waiting on provincial funding.

In B.C.’s North Vancouver riding, where Fisheries and Oceans Minister Jonathan Wilkinson is defending his Liberal seat, only one question addressed to the panel was about race.

Much of the debate focused on oil and gas, and included questions about fish farming and habitat protection.

The riding is in the middle of the heated Trans Mountain debate, as the Squamish Nation and Tsleil-Waututh Nation continue to legally challenge the pipeline’s expansion.

The all-white panel of candidates – Justine Bell (NDP), George Orr (Green), Andrew Saxton (Conservative) and Wilkinson – each described how they would work in partnership with Indigenous communities to address the climate crisis. (Azmairnin Jadavji, the PPC’s candidate for North Vancouver, declined to attend the debate.)

In their responses, Saxton and Wilkinson each talked about including First Nations as equal stakeholders in protected marine and terrestrial areas — points they repeated throughout the discussion.

Orr didn’t provide a detailed answer. He simply said he agreed with Wilkinson, but that while “a lot of good has been done,” the Liberals haven’t done enough. He criticized the government’s approval of the Trans Mountain pipeline without mentioning First Nations.

While he took heat from his three opponents, Wilkinson maintained the Liberals climate plan was “extremely ambitious.”

He pointed to the government’s promise to eliminate single-use plastics by 2021, their ban on microbeads, and their investment in habitat protection.

Only Bell brought up implementing the United Nations Declaration on the Rights of Indigenous Peoples, which would mean legally recognizing Indigenous Peoples’ rights to self-determination and self-government and protect access to their traditional territory.

“Our entire platform is for us to work in equal partnership with Indigenous people. It’s not enough to just bring them to the table,” she said. “We are going to implement the United Nations Declaration on the Rights of Indigenous people, now. What that means is we’re going to work on free, prior and informed consent.”

The crowd seemed to remain inconclusive, giving each candidate respective snaps in place of applause. But only Saxton received some scoffs – first, when he called LNG one of the cleanest forms of energy.

Later, an audience member asked if each candidate had attended Vancouver’s climate strike on Sep. 27, which Vancouver police estimate attracted about 100,000 people. Saxton was the only one who didn’t march, a decision that paralleled that of Tory leader Andrew Scheer.

He said he considered going, but decided it was “not a day for politicians to go and get photo ops.” The audience audibly snickered. When Orr answered that he had marched, he addressed the Conservative candidate.

“The notion that any of the three of us went to be photographed – I’m not sure how to characterize that politely, so I won’t,” Orr said. “I went because I care.”

This week in climate inaccuracy: the two airplanes