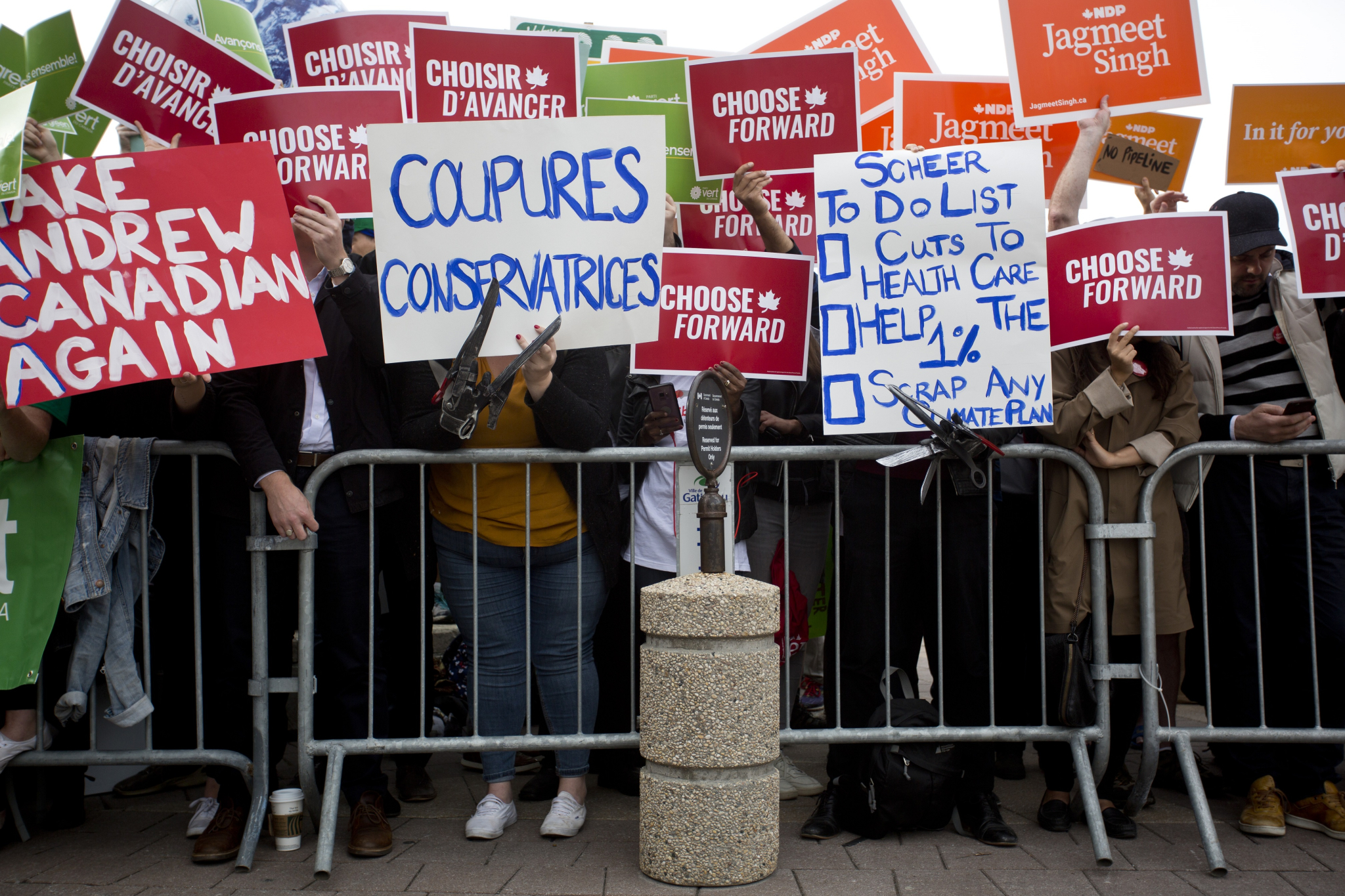 Supporters hold up signs in advance of the English-language election debate in Gatineau, Que. on Oct. 7, 2019. Photo by Andrew Meade
Previous story
Next story

Like many Canadians, I watched the federal leaders’ English language debate hoping that the issues I care about would be discussed and eager to hear where our leaders stand.

As a scientist, and someone who cares deeply about how science is used when our federal leaders make important policy decisions that will affect me, my family and all Canadians, I came away disappointed. Beyond a few comments from Elizabeth May on the need for science-based climate targets, there was no discussion at all of how the leaders would support science in Canada or ensure that it’s used in policy decisions.

From the platform documents released so far there has been almost no mention of science, research, or evidence-based decision-making. Only the Green Party has included strong commitments around science and increased transparency, including funding for academic research and a commitment to support the new Science Integrity Policies that have been put in place this year to ensure that government scientists can speak publicly about their work. The Liberal and NDP platforms contain no clear commitments to funding science or transparency around how decisions are made. The Conservatives have yet to release a platform and, so far, their policy announcements have not included anything concrete on these issues.

In some ways, this is unsurprising. Science doesn’t usually get much attention during elections. But this is long overdue for a change. Science and research underpin almost all the issues that Canadians care about.

The environment, health care and the economy are always top issues of concern for Canadians, and this election is no different. Investing in science and research is critical for progress on all these issues. Averting the worst of the climate crisis is going to require adopting science-based targets, investing in research on new technologies, and ongoing funding for climate and atmospheric science to monitor the impact of these policies. And continuing to improve on our world-class healthcare system, especially in light of an aging population, will require investing in health research.

While investments in research don’t often offer economic benefits in the short-term political cycle, history has demonstrated that it pays off, both in overall economic growth and in an increased quality of life. In addition, without strong mechanisms in our governments to ensure that scientific evidence makes its way into our decisions on these key issues, we’ll never be able to move forward.

Canada hasn’t been immune to these global trends. Almost a third of Canadians still think the science on vaccines isn’t “quite clear” and just last month there was an anti-vaccine protest in Toronto. Surveys show that, overall, Canadians have a high trust in science and scientists, but the numbers also show that this trust is decreasing. At the same time, an unprecedented number of Canadians think of scientists as “elites.”

Canadians deserve to know how their candidates and party leaders will support the science and research ecosystem, and how our next government will ensure that their decisions are informed by the best available evidence. Since we’re not getting this information in platforms or from the leaders’ debates, we’re encouraging Canadians to ask their candidates directly.

Together with almost 20 science and student organizations, we’ve launched a #VoteScience portal making it easy for Canadians to connect with candidates on science issues. The response from candidates has been enthusiastic; many have responded to the campaign and engaged with their communities on how they will support science and evidence if elected. Now if only this same enthusiasm was picked up by party leaders.

While science may not top the list of issues that many Canadians care about, it certainly impacts almost all the issues that do, from the economy, to health care to the environment. While we decide the future of our next four years, it’s critical we don’t let science, research and evidence fall through the cracks.

Meet the public servants running for the People's Party