Elizabeth May: 'I will work with MPs willing to eliminate fossil fuels' 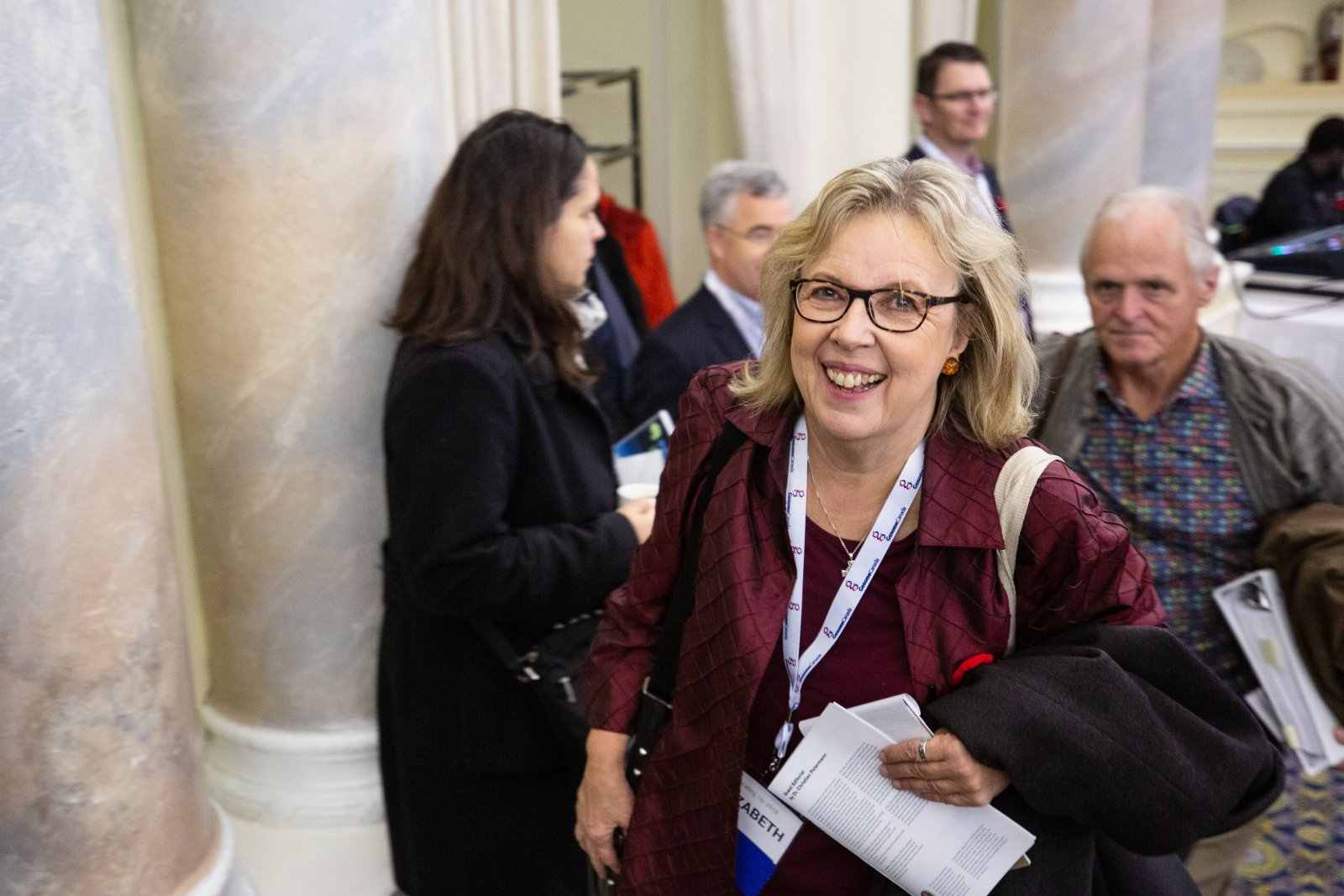 What is blocking climate action?

I struggle with this. Back in the 1980s, when I first started work to protect a stable climate, I was sure that before the year 2000 we would succeed.

We had all the information we needed to take action. The science was clear. Business-oriented but environmentally conscious leaders like Brian Mulroney and Margaret Thatcher had seen and heard enough. In the late 1980s, they started pushing for action.

By 1992, all the world’s governments agreed that only global action could save us from melting permafrost, rising seas, extreme weather events, retreating glaciers. Every government on Earth – from Castro’s Cuba to Bush’s USA -- signed and ratified the U.N Framework Convention on Climate Change. Canada, having played a leading role in all aspects of the 1992 Rio Earth Summit, was the first industrialized country to do so.

The science was not wobbly or uncertain. The technologies to avoid the crisis were available. But instead of acting to slash greenhouse gases, the world community failed miserably. No action. Emissions continued to rise.

We still had a chance in the last decade of the twentieth century to avoid the nightmare in which we find ourselves today. But here we are. Billions of tons of Greenland ice lost in a single day in July. Forests burning out of control inside the Arctic Circle. Populations from India to France withering in unbearable heat. The evening news like a science fiction version of the Weather Channel. All of this we could have avoided.

Those who feel connected to the climate crisis say things like “this is the new normal.” But the bad news is that we may look back on the summers of smoke in 2017 and 2018, of massive melts and species die-offs, and say “those were the good years.”

It is easy to blame our failure on the enormous lobbying pressure of Big Oil; to the Koch Brothers and Exxon-Mobil. The deep pockets of Big Oil funded campaigns of disinformation, known in earlier, purer times, as lies. But those lies and propaganda campaigns need not have stopped us.

Was it greed? Was it stupidity?

Worse. I have come to conclude it was politics.

I voted Liberal in 1993 because the Red Book pledge to cut GHG by 20% was so much better than the Conservative pledge to ensure that emissions would remain flat between 1990 and 2000.

But then the only Liberal to win a seat in Alberta that year, Anne McLellan, won by 12 votes. “Landslide Annie” they called her and with that slender Liberal gain all climate hopes were smashed. Work that was in progress on carbon pricing was aborted. The pledge to reduce emissions – dumped. And Jean Chretien went to Edmonton to announce billions of dollars to help startthe oil sands. First with a lump sum infusion of billions and then accelerated capital cost allowances (ACCA) amounting to billions/year to encourage investment in an otherwise unprofitable enterprise. Oil was selling for less than $30/barrel when the 1996 ACCA were brought in. Bitumen production from the oil sands needed a price of at least $80/barrel to break even.

Then we negotiated Kyoto. In 1997, Bill Clinton talked Jean Chretien into a deeper Canadian target for emissions – 6% below 1990 levels between 2008-2012. But politics stopped the USA from ratifying Kyoto. The stupidity of colleagues of mine in the US environmental movement led to a call for all Senators to vote for the Byrd-Hagel resolution against Kyoto. The aforementioned idiots in the US climate movement thought that the 95-0 vote would convey the meaninglessness of the motion. They thought that having no one vote against the resolution would make it seem meaningless. Tactical error! Instead, it was the anchor that sunk ratification in the US.

Meanwhile, Canada did do a good job defending Kyoto, even though we did not ratify until 2003. I voted NDP in the 2004 election, because, well, Jack Layton.

In 2005, Paul Martin’s Liberal minority government brought in a respectable plan that would have gotten us nearly to our Kyoto goals. Then, Paul Martin brought in the 2005 budget with billions to implement the Kyoto plan plus the Kelowna Accord for indigenous justice and universal childcare.

But the NDP, under the same Jack Layton, saw short-term political advantage – they could work with the Conservatives and the Bloc to kill the Martin government. The NDP would replace the Liberals. Given our antiquated First Past the Post electoral system, it would then inevitably be the NDP’s turn to be government sometime soon. The hyper-partisan strategy of the NDP delivered us into the hands of Stephen Harper.

We could have avoided the emergency in which we now find ourselves – if not for short-term, incremental, self-serving partisanship. Leader after leader claiming to care about climate has betrayed future generations in hopes of winning a few more seats.

Now, the October 8, 2018 special report of the IPCC on 1.5 degrees C has made it clear that if we fail to hold to the 1.5 degree goal within the Paris Agreement, it is very unlikely human civilization will be intact by the end of this century. We have – at most – 20 months to make the significant and aggressive changes in our patterns of energy use to avoid shooting past that critical constraint below which we can still have a livable planet.

And in this election, the irresponsible Scheer Conservatives will be a perfect foil for the fraudulent Liberals. The Liberals will say “vote for us; Scheer is worse.” But we are in a climate emergency - “better than the Conservatives” is not what is required. The current Liberal target, unchanged from Harper’s, is a target to ruin. Losing slowly is still losing. To keep within 1.5 degrees we must double the target – to 60% below 2005 levels by 2030. Only the Greens are calling for this science-based target with a real plan to back it up. We can get to a non-carbon economy. We can thrive while doing so.

But the window of opportunity to save ourselves will close before the next federal election in 2023. And when it closes, it closes forever.

So we need to take the politics out of our response to the climate emergency. We need to approach this issue as earlier generations approached the fight against fascism. We need a non-partisan approach – the equivalent of a War Cabinet – to chart our course to survival.

I will work with any and all MPs willing to eliminate fossil fuels, change our agricultural practices, plant trees, retrofit homes and move to a safe world for our children.

What else can we do?

Thank you for being straight-out honest about your hopes and votes in the past. I know that you even worked as an advisor and speechwriter in Brian Mulroney's Ministry of Environment, and resigned on principle over the approval of the Rafferty-Alameda dam project.

No shame on you; only shame on the Janus-faced double-speakers of all parties who have let us down repeatedly in the past, bowing ultimately to the campaign contributions and the lobbyists. And shame on the fossil-fuel companies who knew the truth about climate change in the mid- to late '80s, and instead of action and investment in clean alternatives chose the path of lies, deceit and massive funding of denialism.

I signed up for the Green Party of Canada in 1983, and was one of its first 60 candidates in the 1984 federal election. (I didn't win, but at least I got more votes than the Social Credit candidate.)

Back then, most of the climate-change talk was around "nuclear winter"; the effects of throwing millions of tons of particulate combustion products (incinerated cities, incinerated people) into the upper atmosphere as a result of global nuclear war. But the same advanced computer modelling of the nuclear-winter scenario also allowed for the first time some solid, credible calculations of the climate-changing effects of CO2 emissions. And the models have continued to improve ever since. But because of politics, the projections of those models have consistently been downplayed by the IPCC, where science can still be overruled by politicians.

And I have also switched parties from time to time. Athough I've never voted Liberal (let alone Conservative), I did run as a federal candidate for the NDP in 2006, inspired by volunteering for Jack Layton. But I was so impressed by my Green Party colleague (I can't possibly call him an opponent) in that election that I switched back to the Greens permanently thereafter.

I have great respect for Mr. Singh as a person - I have shed tears reading his autobiography, and even contributed to his byelection campaign in Burnaby South - but I am less than impressed by his repeated waffling around fossil fuel projects. And I remain concerned about the NDP's ties to powerful unions in the fossil-fuel and nuclear industries.

Thank you again, Elizabeth. It's Green all the way for me now...