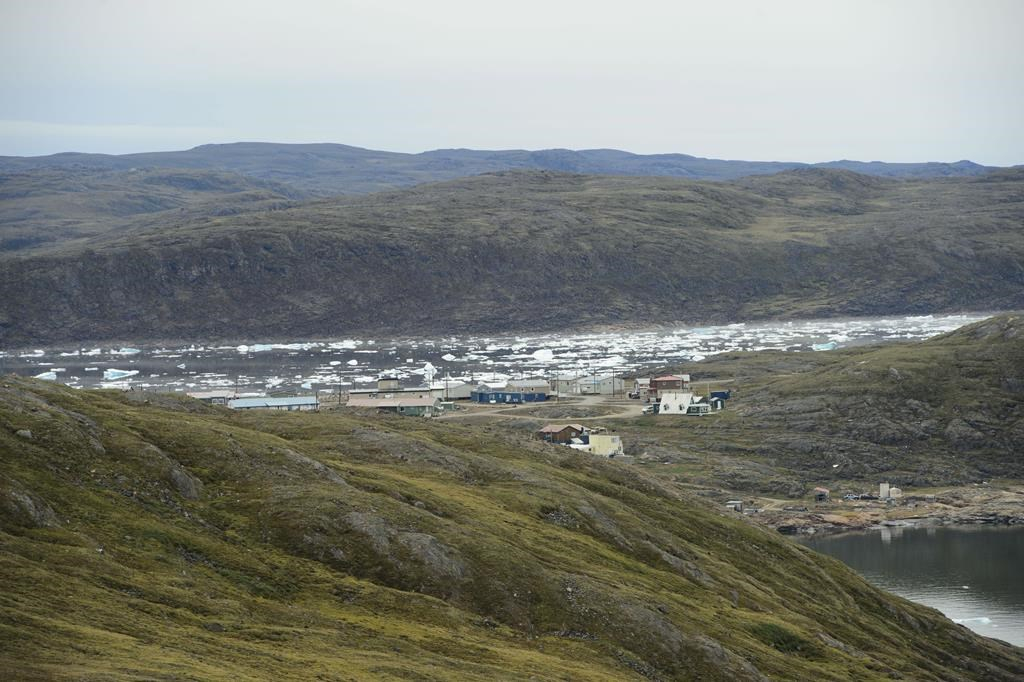 The community of Apex, Nvt., is seen from Iqaluit on Friday, Aug. 2, 2019. File photo by The Canadian Press/Sean Kilpatrick
Previous story
Next story

Research has found Arctic soil has warmed to the point where it releases more carbon in winter than northern plants can absorb during the summer.

The finding means the extensive belt of tundra around the globe — a vast reserve of carbon that dwarfs what's held in the atmosphere — is becoming a source of greenhouse gas emissions responsible for climate change.

"There's a net loss," said Dalhousie University's Jocelyn Egan, one of 75 co-authors of a paper published in Nature Climate Change.

"In a given year, more carbon is being lost than what is being taken in. It is happening already."

The research by scientists in 12 countries and from dozens of institutions is the latest warning that northern natural systems that once reliably kept carbon out of the atmosphere are starting to release it.

Until now, little was known about winter emissions from permafrost and the soil above it. Even scientists assumed the microbial processes that release the gases came to a halt in the cold.

"Most people think in the winter, there's no respiration, that the microbes eating the carbon that produce these emissions aren't active, which isn't actually the case," Egan said.

The scientists placed carbon dioxide monitors along the ground at more than 100 sites around the circumpolar Arctic to see what was actually happening and took more than 1,000 measurements.

They found much more carbon was being released than previously thought. The results found carbon dioxide emissions of 1.7 billion tonnes a year are about twice as high as previous estimates.

Arctic plants are thought to take in just over one billion tonnes of the gas from the atmosphere every year during growing season. The net result is that Arctic soil around the globe is probably already releasing more than 600 million tonnes of CO2 annually.

Scientists previously thought carbon absorbed by tundra plants during the summer more or less made up for what was emitted in the winter as well as for what was released from melting permafrost during warm months.

"We're seeing that the value emitted in the winter is larger than the net uptake for the growing season."

What's more, the pace of the emissions is likely to increase.

Under a business-as-usual scenario, emissions from northern soil would be likely to release 41 per cent more carbon by the end of the century.

But the Arctic is already warming at three times the pace of the rest of the globe. Even if significant mitigation efforts are made, those emissions will increase by 17 per cent, said the report.

Egan notes the research didn't measure methane, a greenhouse gas about 30 times more potent than carbon dioxide that is also released from soil.

Last summer, research suggested that larger, hotter wildfires are turning boreal forests into carbon sources. Another paper found that instead of melting slowly and steadily, permafrost is subject to sudden collapses that speed up the rate of carbon release.

Mitigation won't stop the problem any more, said Egan, but it will help.

By Melody Schreiber | News | May 10th 2018
Race Against Climate Change

And maybe here we see nascent

And maybe here we see nascent beginnings of the "runaway" aspect of beyond-the-tipping-point?
How, I wonder, do they differentiate the CO2 generally in the air, from other carbon-emitting sources, from that emitted by the soil itself?