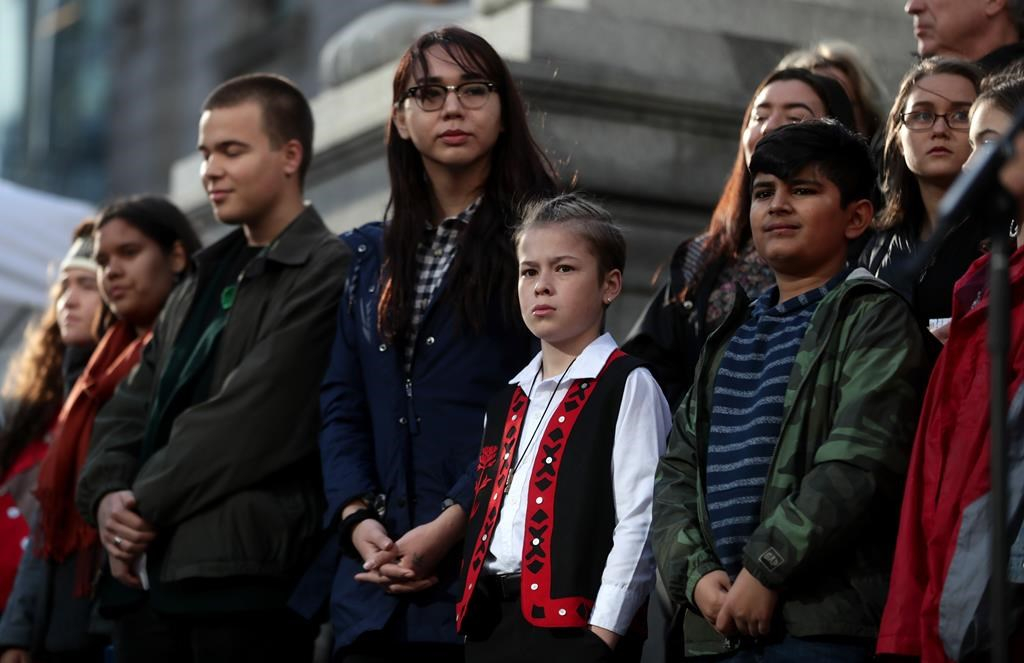 Some of the 15 young people who are parties to a lawsuit filed against the federal government for contributing to high levels of GHG emissions and dangerous climate change are seen at a press conference, in Vancouver, on Oct. 25, 2019. Photo by The Canadi
Previous story
Next story

A young plaintiff in a lawsuit against the federal government says she has suffered the debilitating consequences of Lyme disease because climate change has expanded the habitat of disease-carrying ticks.

Sierra Robinson of Vancouver Island is one of 15 young Canadians suing the federal government for individual injuries they allege are the result of climate change.

In a lawsuit filed Friday, the youths ask the Federal Court to compel the Canadian government to develop a climate recovery plan using the best available science.

"Despite knowing for decades that GHG emissions cause climate change and disproportionately harm children, the defendants continue to cause, contribute to and allow GHG emissions that are incompatible with a stable climate capable of sustaining human life and liberties," the statement of claim says.

Among the consequences, rising temperatures have significantly increased the blacklegged tick population, their range and the length of season during which they are active, it says.

Robinson, 17, said in an interview that she was temporarily limited to a wheelchair and has experienced chronic pain, constant headaches, fibromyalgia and other conditions that were triggered by Lyme disease.

"These impacts have been more severe and prolonged during periods of higher temperatures and extreme weather events," the statement of claim alleges.

The youths announced the lawsuit at a rally Friday and were joined on the steps of the Vancouver Art Gallery by Swedish activist Greta Thunberg.

The allegations in the statement of claim have not been tested in court.

The Department of Environment and Climate Change says the government has a plan to combat climate change.

The Pan-Canadian Framework on Clean Growth and Climate Change has more than 50 concrete actions to fight climate change and encourage economic growth. It was developed over one year and includes phasing out coal, putting a price on pollution, building thousands of public transit projects across the country and investing in clean technology, the department says.

"The government of Canada is ambitiously tackling climate action, and will remain steadfast in its commitment in fighting it," it says.

But the court documents say Canada remains one of 10 highest greenhouse gas emitters in the world in terms of total national emissions. The science is "unequivocal" that dangerous climate change is upon us due to human activity, including the combustion of fossil fuels, the statement of claim says.

The government is therefore in violation of the plaintiffs' charter rights to life, liberty, and security of the person, as well as their right to equality because young people are disproportionately affected by the affects of climate change, it alleges.

Lawyer Christopher Tollefson told the crowd that the "end game" is to see the court compel a "credible climate recovery plan based upon the best available science."

The David Suzuki Foundation, which is a partner in the case, did a broad search for appropriate plaintiffs and found 15 who range in age from seven to 19, CEO Stephen Cornish said in an interview.

"We needed to find youth that already have been impacted by climate change to show the damages are today, not just tomorrow," he said.

While the goal of the lawsuit is a court-ordered climate plan, Cornish said he believes it could affect political change without being won in court.

"We believe politicians, business leaders, municipal leaders will start taking responsibility when they hear from these young people."

Lead plaintiff Cecilia La Rose, 15, was diagnosed with allergy-induced asthma after an attack in 2010 that sent her to hospital, the court documents say.

Cold temperatures exacerbate her condition and extreme temperatures in Ontario have had a "severe impact" on her lungs and ability to participate in daily activities. After playing competitive soccer for nine years, she quit this year because of the strain on her lungs, the statement of claim alleges.

"In the last two to three years, Cecilia has experienced more severe asthmatic episodes due to the extreme rise and fall in temperatures, and longer periods of high pollen counts due to a longer warm season in Toronto," the documents say.

Cooling stations were set up at her school last year during a heat wave but they weren't enough for La Rose, who missed several days of school.

"As a result of the heat, Cecilia experienced loss of concentration and severe difficulties breathing. The risk of an acute asthma attack in these conditions caused Cecilia and her family to keep her home," the statement of claim says.