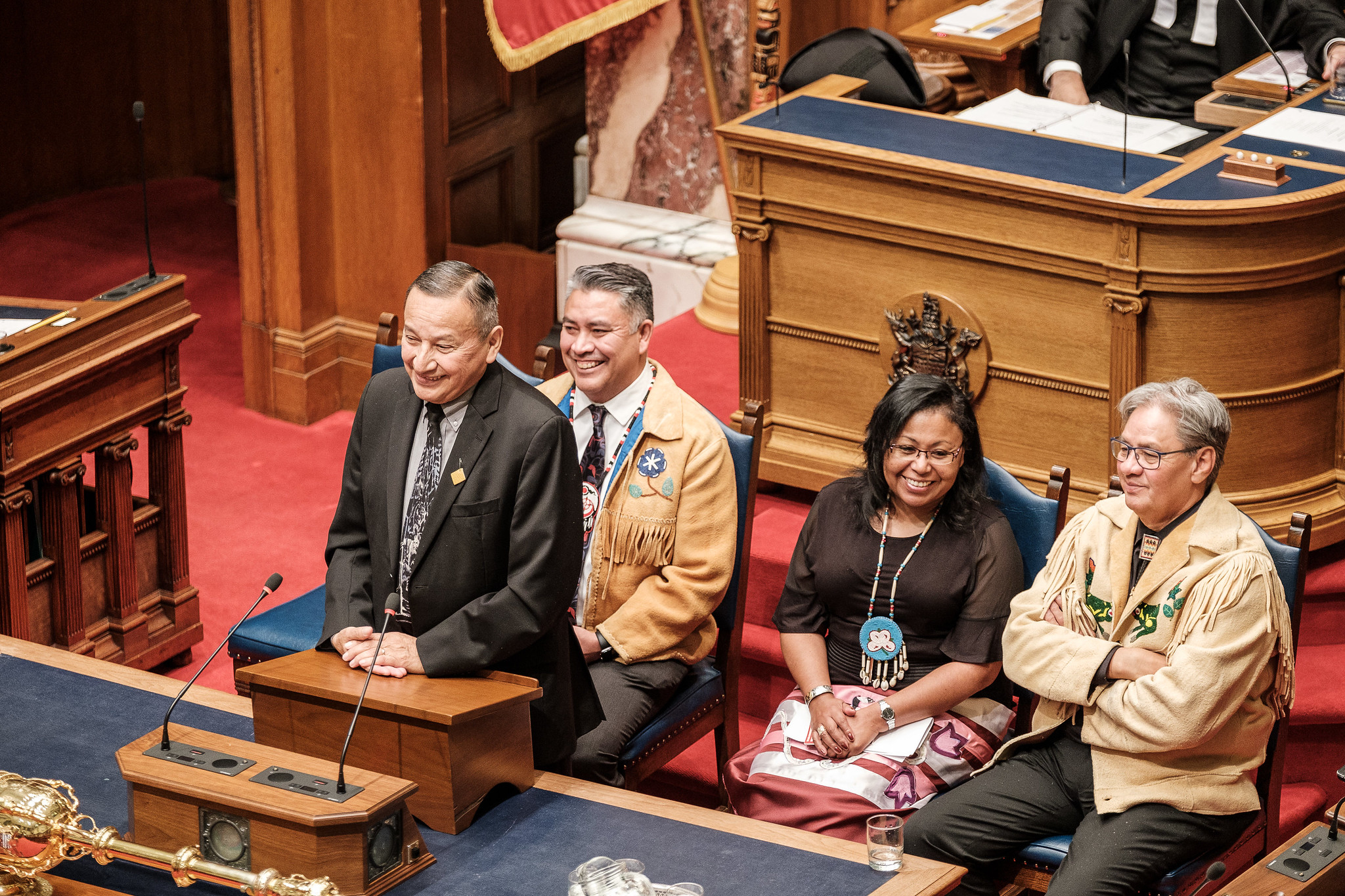 The act doesn’t take away any rights, sets the minimum standard for what “Indigenous rights” mean in B.C., creates a tool for creating agreements between Indigenous governing bodies and the provincial government for shared decision-making, mandates a review of legislation with an eye toward the rights of Indigenous Peoples and calls for action planning and reporting.

It has been applauded by a powerful mix of forces, including the First Nations Leadership Council, the Business Council of B.C., the B.C. Chamber of Commerce, the B.C. Federation of Labour and environmental groups. That’s a potent coalition.

A simple four-page piece of legislation, the act sets the path forward for Indigenous rights in B.C.

What’s in the act?

The most important part is laid out clearly in the purpose section:

(b) to contribute to the implementation of the declaration;

(c) to support the affirmation of, and develop relationships with, Indigenous governing bodies.

The first part of the act sets out a requirement. The government must take a responsibility to take all measures to ensure all laws are in alignment with the UN Declaration on the Rights of Indigenous Peoples (UNDRIP). The act requires an action plan to be developed with First Nations to achieve that objective. And further, the minister responsible must report annually on progress toward this objective. This requirement creates an accountability mechanism so that First Nations and the public can see whether the government is productively moving toward the goal.

Those could include multi-community organizations, mixtures of elected and hereditary leadership or any structure as determined by the group itself. The act then gives powers for the government to share statutory decisions with Indigenous Peoples through formal agreements. It’s important, however, to recognize it’s up to First Nations to organize themselves to do this work.

What are all the statutory decision-making powers the province claims? That is the crucial question for anyone wondering what the legislation means. Indigenous governing bodies may use this to create agreements on shared decision-making in environmental assessments over industrial projects in their territory or taking control of child welfare for kids in the care system.

The point is that each Indigenous community can define for themselves what they would like to prioritize.

The provincial government is also now recognizing the inherent self-determination of Indigenous groups and including them in decision-making. The province is extending its arm of decision-making to include Indigenous communities. It uses UNDRIP as a framework for determining what decisions need to be shared.

The act also includes a “non-derogation clause.” This wording is a standard clause often added to legislation or agreements to protect and affirm inherent Aboriginal and treaty rights and title. Nothing in the act can be read to take away any existing Aboriginal or treaty rights of the Aboriginal peoples of Canada under Section 35 of the Constitution Act of 1982. As is later laid out, B.C.’s Declaration on the Rights of Indigenous Peoples Act is to enable further rights without watering down any existing rights.

The province is creating new tools available to all First Nations in B.C. Any First Nation that may have signed a final agreement under the B.C. Treaty Process or self-government agreement is given new opportunities to exercise rights and decision-making.

Both the provincial government and First Nations leaders have expressed their opinion that consent does not equal veto. The premier pointed out in his remarks to media that neither the legislation nor declaration contain the word veto. Dr. Roshan Danesh describes it by saying, “Consent and veto are not the same thing, and consent is not a veto over resource development.”

Consent is often described as a process. James Anaya, former special rapporteur on the rights of Indigenous Peoples, explained that free, prior and informed consent is a standard to support parties working together in good faith, making every effort to achieve mutually acceptable arrangements and that a focus should be on building consensus.

Each Indigenous governing body must define the question of how to implement it on the ground. The essence of the right to self-determination is the right to define your political future, including the implementation of your rights.

At four pages long, but with the UN declaration attached, B.C.’s Declaration on the Rights of Indigenous Peoples Act is a short but powerful piece of legislation. For many generations, B.C. has operated on a colonial understanding of its role, powers and authority, where it assumed control over Indigenous lands and Indigenous Peoples. Since 1982 when Canada repatriated the Constitution, provincial governments have refused to provide clarity and instead left it to the courts to figure things out.

Progress has been slow, confusing and costly. But now these provincial lawmakers are taking decisive action to define powers clearly and establish a provincewide framework for minimum standards for upholding and respecting Indigenous rights. The 43rd article of the UN declaration sets this out clearly by “constitut(ing) the minimum standards for the survival, dignity and well-being of the Indigenous Peoples of the world.”

Finally, a government in Canada is stepping forward and putting its words into law, creating a path forward for the survival, dignity and well-being of the Indigenous Peoples in our west coast part of the confederation.

In this article, UNDRIP is

In this article, UNDRIP is described as a "framework" for the Declaration Act--in other words, something to be guided by but not necessarily followed, especially concerning the issue of consent. In any other realm of life, consent means giving permission: when you consent to a medical procedure, for instance, you permit it; when you don't consent, the procedure isn't done. We're all clear on that. In dealings between the government and First Nations, however, consent loses its clarity. Suddenly, consent is a "process," a "standard to support parties working together in good faith," with a "focus on building consensus." These are weasel words that don't fall within the intention of UNDRIP. What happens if there's no consensus? That's when the provincial government sends in the RCMP to break your wrist and arrest you for trying to protect your home. That's when government lawyers insult you in court and disparage long-standing treaties, and that's when the province proceeds with building its next Site C, TransMountain pipeline, and LNG pipeline right through your territory, as if you don't exist.

The transMountain pipeline is

The transMountain pipeline is federal, so skip that one.