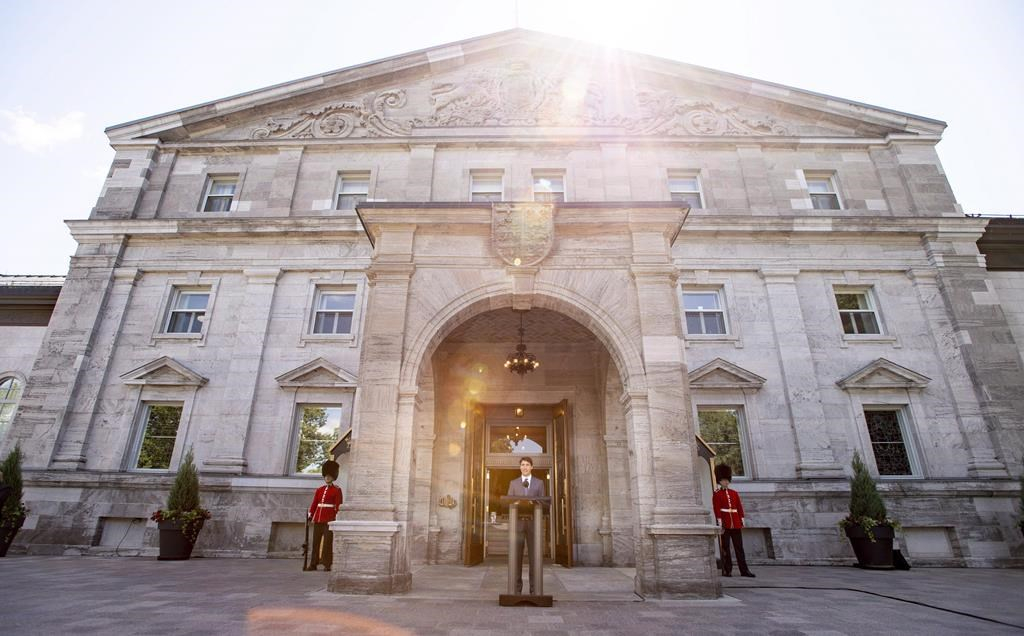 Prime Minister Justin Trudeau speaks during a press conference following a cabinet swearing in ceremony at Rideau Hall in Ottawa on July 18, 2018. File photo by The Canadian Press/Justin Tang
Previous story
Next story

Even before he swears in his new cabinet, Justin Trudeau is being urged to ask his new justice minister to move swiftly to make Canada's assisted-dying law less restrictive.

The prime minister has said he'll comply with a September court ruling that struck down as unconstitutional the requirement that only those near death can qualify for medical help to end their suffering.

In her ruling, Quebec Superior Court Judge Christine Baudouin gave the government six months — until March 2020 — to amend the law, although the government could seek an extension.

Dying with Dignity Canada is urging Trudeau, who is to unveil his new cabinet on Wednesday, to ensure whomever he appoints as justice minister will give priority to amending the law — and go further than the ruling demands.

For starters, the group wants the government to get rid of the requirement that a person's natural death must be reasonably foreseeable in order to qualify for a doctor-assisted death. That is the provision struck down by Baudouin.

But it also wants the government to drop the stipulation that someone must be able to give informed consent twice: once when they request the procedure and again immediately prior to receiving it.

The requirement to give consent a second time has stripped some people, who've been approved for an assisted death, of their ability to follow through after their condition deteriorated and they lost the capacity to give last-minute consent.

In other cases, people who feared losing capacity have refused brain-fogging pain medication or have been forced to receive a doctor-assisted death sooner than they wanted.

Dying with Dignity Canada has been lobbying hard for an end to the second consent requirement.

They are calling for "Audrey's amendment" in memory of Audrey Parker, a Halifax woman who was suffering from terminal breast cancer that had metastasized to her brain. She had been approved for an assisted death but ended her life earlier than she had originally wanted last fall because she feared she was losing mental capacity.

"We would like to see (these changes) high on the list of priorities because there are real cases of real people who are waiting for this to happen," said Jim Cowan, a former Liberal senator who is now chair of the Dying with Dignity Canada board.

Longer term, the group wants the government to change the law to allow people to make advance requests for an assisted death but Cowan suspects the government will want more time to debate that.

The issue must be dealt with, in any event, under the legally required parliamentary review of the assisted dying law that must be launched by next June.

The review must also deal with two other issues left unresolved in the 2016 legislation: whether it should apply to mature minors and those suffering solely from mental illnesses.

Dying with Dignity Canada is urging the government to include it in preparing for the review. Cowan noted that the group has a lot of data and personal stories about how the law has worked and "where the difficulties lie."

However, it's likely that Dying with Dignity Canada and other groups advocating for a less restrictive law would prefer to see Montreal MP David Lametti remain in the post.

They were thrilled when Trudeau plucked Lametti from the backbenches last January to take on the justice portfolio. He was one of just four Liberal MPs who had voted against the Trudeau government's 2016 legislation that legalized medical assistance in dying.

The former law professor had argued the law was too restrictive and did not meet the eligibility criteria set out by the Supreme Court in a landmark 2015 ruling that struck down the prohibition on doctor-assisted death — an opinion eventually echoed by Baudouin.

The law was originally spearheaded by former justice minister Jody Wilson-Raybould, now an Independent MP, who rejected calls for changes even in the face of anguished pleas from Parker and others.

Trudeau's Liberals won a minority of seats in the House of Commons and will need the support of either the NDP or the Bloc to pass legislation — which should be relatively assured in the case of amendments to the assisted-dying law.

"We support Dying with Dignity Canada's call for the government to re-examine this law," NDP MP Don Davies said in a statement Monday.

"The recent court ruling in Quebec highlights the problem with the current ... rules and as Jagmeet Singh mentioned during the last campaign, we are committed to improving the law to ensure that everyone has the right to die in dignity.''