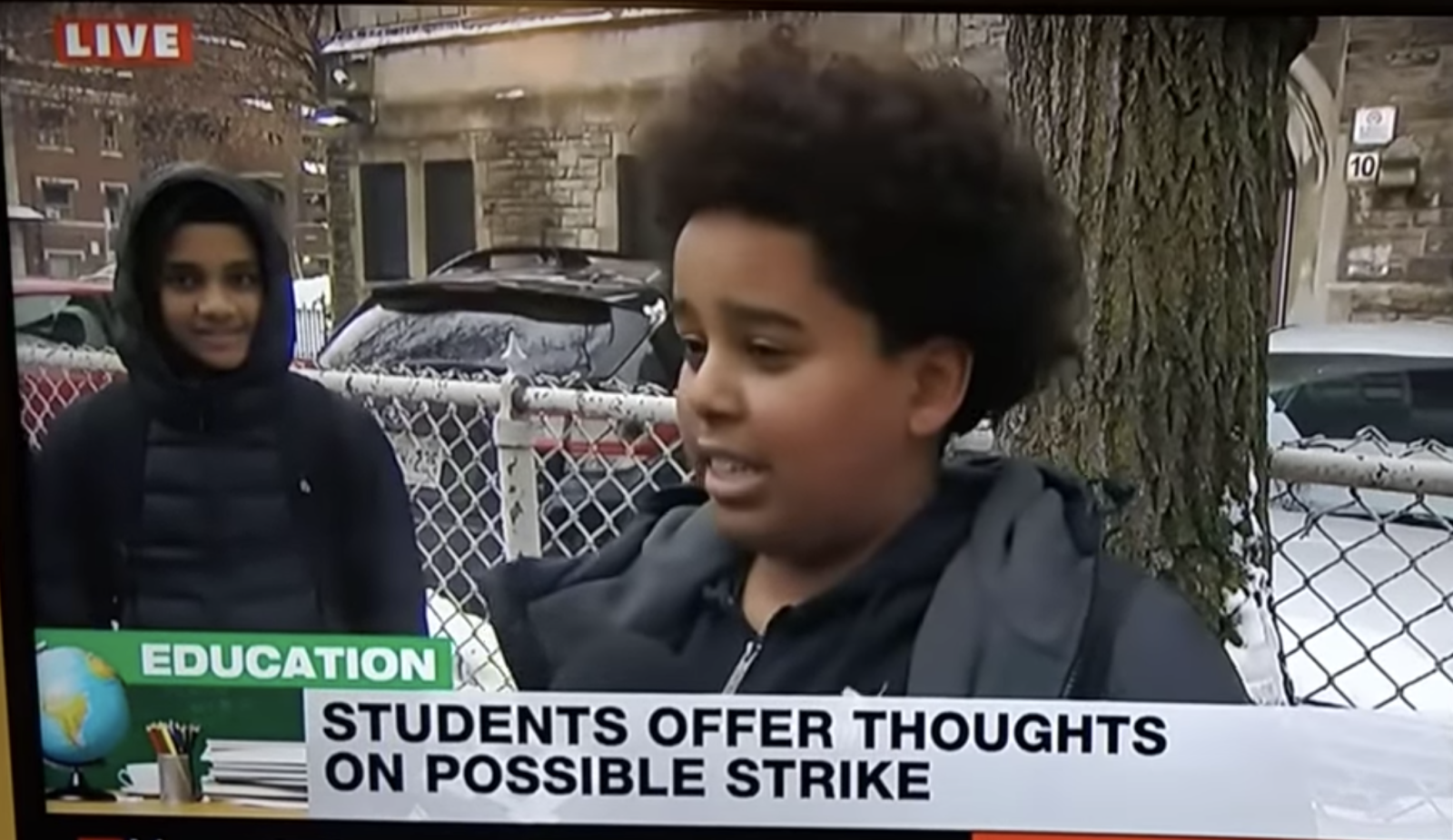 Robael, the 14-year-old who called Ontario Premier Doug Ford a Timbit, poses with his friends in downtown Toronto. Photo by National Observer
Previous story
Next story

There were already extraordinary scenes.

Some 40,000 high school teachers and 15,000 support workers in Ontario took to the picket lines Wednesday for a one-day strike action.

Hundreds of school closures across the province followed, which Ontario Secondary School Teachers' Federation president Harvey Bischof said were necessary after four days of negotiations toward a new collective agreement with the province yielded little progress.

Unions remain in a tense standoff with Premier Doug Ford's government over a proposal to increase average class sizes in secondary schools to 25, up from 22, which could phase out thousands of teaching jobs over several years and cut the number of courses offered to students. Additional strike actions are in the cards.

And then, this happened.

Interviewed by a television journalist from CP24, a Toronto student responding the day before to news of the teachers strike called Ford a Timbit.

“Doug Ford is envisioning in his mind, he’s probably thinking about Timbits right now," he said. "And I’m probably telling him he is a Timbit himself."

Beginning Wednesday morning, video of the interview rapidly circulated across social media. It was an injection of levity in the middle of a complex political debate.

For much of the day, "Timbit" was among the top trending topics on Twitter in Canada. A clip of the video posted on the popular Instagram account 6ixbuzztv was viewed nearly 600,000 times.

The Huffington Post welcomed the quip into the "Canadian Insult Hall of Fame."

The politics of education policy aside, comparing a man to a small and spherical fried-dough confection reasonably consumed in no more than two bites was a new achievement in clowning.

And, to many, it made immediate sense. Because of the intangible charisma of the teen. Because his apodictic confidence made the Timbit an armature upon which any listener could project their own definition of the insult.

"He is a Timbit himself," observed Toronto-based basketball writer Daniel Reynolds. "The poetry of that statement."

So what improvisatory magic was this? What in this young man led him to deliver such poetry?

The National Observer sat down with 14-year-old Robael, the Toronto high school student who was cut off by CP24 in the middle of his remarks, to find out.

He brought his four friends who were in the background of the viral video. All variously described him as one of the smartest kids in school, known to his classmates for his sense of humour and for his good grades.

All five of them were incredibly polite, referring to adults they interacted with as "sir" and "ma'am" and introducing themselves with firm handshakes. They all agreed they liked Rob Ford, but aren't especially fond of his brother.

"Rob was better, even though he didn't try," one said.

Once we arrived at the downtown restaurant where we had agreed to meet, the owner recognized Robael and insisted on offering a free meal to "the Timbit kid."

(The Observer is publishing his first name only, out of respect for his privacy as a minor.)

National Observer: How did you end up in that CP24 shoot?

Robael: It was my friends who heard about it first. We were nearby. We knew that CP24 people were coming to our school. And they were going to talk to us about what the students thought about the strike that was coming up the next day. And so they were there. They were interviewing people. I saw this, so I just went. And they just went live. We thought it was being recorded — we didn't know that it was going out live.

NO: In the moment, it seemed to me like you were just clowning.

R: That was basically it. All my friends were there and I just wanted to have a laugh.

NO: When you said Doug Ford should be in jail, were you referring to the allegations that he dealt hashish for several years in the 1980s?

R: I have no idea. I don't like touching on politics too much. But I know the story of how Doug Ford is cutting teachers' jobs to save money. I also heard how he's spending money on himself for (a customized van).

NO: And you're a student, I assume a strike is a concern for you.

NO: Some of the more outlandish things said about you on Twitter have included people claiming you're an example of a student being manipulated by teachers with anti-Ford messaging. Are you an agent of the teacher's unions?

NO: Obviously, I have to ask you why. Why did you call him a Timbit?

R: I don't know. It was just sort of random, I guess. It was like off the top of my head.

NO: Have you ever called someone a Timbit before?

R: Yeah, when me and my friends were joking around with each other before and making fun of each other, I just called this one kid a Timbit. It just came up to my head: Timbit.

NO: So what does it mean then, when you call someone a Timbit? Can you describe someone who is a Timbit?

R: A round person. And dumb. Like just a Timbit.

NO: Some people have said they thought your remarks were harsh or inappropriate. Have you encountered any of that?

R: It's really been nice. Two elderly women on the bus today recognized me, and they said it was funny. We went to Yorkdale Mall yesterday and there were people taking pictures with me.

NO: The guy at this restaurant just gave you a free meal.

NO: This is all a result of you being funny. Your friends here say you're known for being the funny guy at school. How did you get this way?

R: I don't know. It just comes to my head. People see me as a funny guy, so I just go with it. With a lot of jokes. Living in Toronto, talking and joking with other kids all the time, it comes easy.

NO: A couple of your friends mentioned being afraid to go in front of the cameras because they didn't want to get in trouble with school. Did you get in any kind of trouble?

R: No. Our principal liked it. The teachers thought it was funny.

NO: You're a meme now. Your head has been photoshopped onto Spider-Man. You were edited into a fake Canadian Heritage moment. Have there been any other notable things?

(This interview has been edited and condensed for clarity.)

Out of the mouths/brains of

Out of the mouths/brains of teenage babes....

A timbit - a hole, a vacuum made visible and tangible, but with no discernable nutritional or intellectual value. Yes, it resonates with the vacuous, non-sense we have come to expect from this party, government and premier.