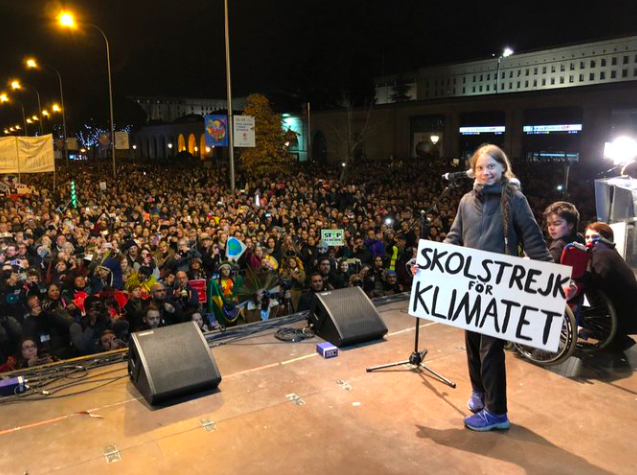 Photo posted on twitter by Thunberg: "School strike week 68. They say more than 500,000 people showed up tonight beside the Swedish parliament building,' the teen tweeted.
Previous story
Next story

Demonstrators from dozens of countries marched down Paseo del Prado in central Madrid, drumming and chanting. Among the signs in the crowd: “Denial is suicide,” “Don’t be fossil fools,” and a giant banner reading “No hay planeta B” (“There is no planet B”).

Organizers estimate the event drew more than half a million people, although no official tally was available late Friday.

Thunberg arrived in Madrid by train on Friday after sailing by catamaran across the Atlantic Ocean from the United States to Lisbon, Portugal ― all part of an effort to use carbon-free transportation.

The 16-year-old earned celebrity status after she went on strike from school last year following Sweden’s hottest summer on record. For weeks, she sat outside her country’s Parliament, holding a “School strike for climate” sign and calling for her home country to enact policies in line with the goals of the 2015 Paris agreement on climate action. Her actions inspired thousands of other school strikes, and in March an estimated 1.4 million young people in more than 100 countries mobilized for a global strike, part of what has come to be known as the Fridays for Future movement.

Earlier Friday, Thunberg joined other teen activists for a staged sit-in at the U.N. 25th Conference of the Parties. At a press conference ahead of Friday’s demonstration, Thunberg stressed that the world can’t afford to delay action any longer.

“We have been striking for over a year and still basically nothing has happened,” she said. “The climate crisis is still being ignored by those in power. We cannot go on like this. It is not a sustainable solution that children skip school.”

Thunberg also called on members of the media to not just focus on her.

It appears to have done little to keep the press and her supporters at bay. French media reported that Thunberg was forced to leave the rally soon after it kicked off.

“The police say that we cannot continue like this. So unfortunately, I cannot participate in the march because I literally cannot move around,” she said in a video posted to Twitter. “It is because of safety, because of all of the people being stepped on ... Of course, I had looked forward to being in the march.”

This week, world leaders are convening in Madrid for the UN’s COP25 summit, which runs through Dec. 13. The countries are working toward bolstering their individual commitments to reduce carbon emissions, as set by the historic 2015 Paris agreement to combat the climate crisis.

No officials from the administration of President Donald Trump — who has repeatedly dismissed the threat of climate change and last month formally began withdrawing the United States from the Paris agreement — are expected to attend.

Earlier this week, a delegation of congressional lawmakers, all Democrats, attended the summit and attempted to affirm the United States’ commitment to climate action, despite Trump’s actions.

The massive protest is expected to end at Nuevos Ministerios, a complex of Spanish government buildings, where protesters will gather for speeches and musical performances. Among those expected to attend is Oscar-winning actor Javier Bardem, according to Spanish media.

Renee Salas, an emergency medicine doctor at Massachusetts General Hospital, marched with a group medical students and professionals from the U.S. and abroad.

“There has to be a huge mobilization in the health sector,” she told HuffPost. “A key part of translating the climate crisis into the health emergency that it is making sure we train medical students and doctors on how climate change is harming health.”

Last month, Salas co-authored a report published in the medical journal The Lancet, warning that the climate crisis has created a public health emergency.

The two-week conference brought together thousands of environmentalists, many of whom are working to raise awareness about a variety of specific issues. Rebecca Hubbard, a resident of Madrid, was among a group of people marching with a banner that read: “Ending overfishing for climate action.” She’s the program director of Our Fish, an organization that works to prevent overfishing in Europe and advocates for more sustainable fishing practices.

“Our message is that the ocean is absolutely critical to the climate, and overfishing right now is the biggest threat to the ocean,” she said. “We really need to end overfishing to rebuild the health of the ocean, which will enable it to protect us from the worst of the climate crisis.”

Marina Fang reported from Washington. This has been updated throughout.