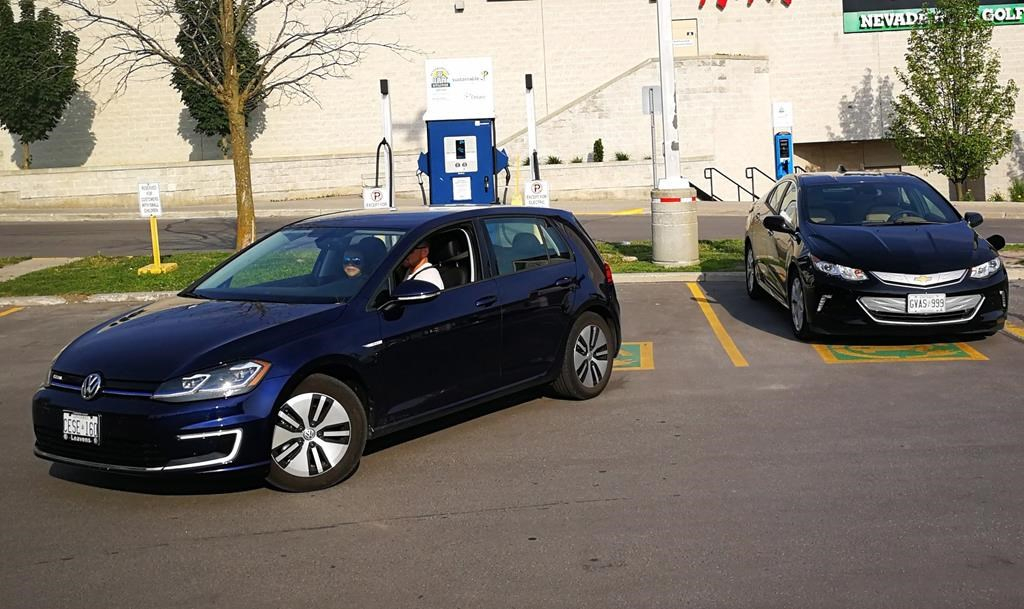 A Chevrolet Volt is plug into a charging station as a Volkswagen e-Golf backs into a parking spot at Lansdowne Mall in Peterborough, Ontario on Sunday, June 17, 2018. File photo by The Canadian Press/Doug Ives
Previous story

Sales of electric vehicles in Ontario have plummeted since the Progressive Conservative government cancelled a rebate last year, hampering progress toward a national target.

In the first six months of this year, sales in Ontario were down more than 55 per cent from the same period in 2018, according to data from Electric Mobility Canada. In the second quarter of this year 2,933 electric vehicles were sold in the province, down from 7,110 in the same period last year.

Ontario is the only province not seeing increases in sales, year over year.

Quebec and British Columbia, which have their own provincial rebates, have long been leading in total sales. Ontario's figures had been increasing on par with theirs until the province's financial incentive disappeared.

Under the previous Liberal government, Ontario had offered up to $14,000 back for buyers of electric vehicles, but Premier Doug Ford's government cancelled it after winning the June 2018 election, saying it was going to people who could already afford expensive cars.

Shortly after that, Ontario's sales sharply dropped — and national sales did, too.

They rebounded after the introduction this spring of a $5,000 federal rebate, but national sales of electric vehicles are still only at 3.5 per cent, which is a far cry from the federal government's target of 10 per cent in 2025.

"It's going to be challenging for the federal government to meet that target...then even more by 2030 (when Ottawa hopes the number rises to 30 per cent)," said Al Cormier of Electric Mobility Canada.

"If Ontario was in the game again it would make the whole thing a lot easier."

Experts say rebates are key because the up-front cost of an electric vehicle can be anywhere from $10,000 to $30,000 more than a similar gas-powered car. Rebates take away some of that initial price shock, said Cara Clairman, the CEO of Plug'n Drive, a not for profit devoted to electric vehicles.

Mark Nantais, president of the Canadian Vehicle Manufacturers' Association, said that right now the auto industry is taking a loss on electric vehicles of upwards of $10,000 a car. The cost of the technology is still so much higher than that of gas-powered vehicles, he said, but it won't always be that way.

"We see that gap, or that differential, there until probably where you see cost parity in late next decade," Nantais said.

"We've been quite clear on the need to continue with the consumer point-of-purchase incentives. That's really critical until we reach price parity with internal combustion engines."

Transportation Minister Caroline Mulroney's office refused to make her available for an interview.

Clairman said a 2017 survey of about 1,200 drivers in the Greater Toronto Area found that price was a larger barrier to people purchasing electric vehicles than range anxiety — people's worry that their electric vehicle will run out of power before reaching their destination.

It helps that vehicle manufacturers are now coming out with models with a battery range of 400 kilometres, Clairman said, but more public charging infrastructure is still needed.

In Ontario, the former government had put $20 million toward installing a network of 500 charging stations across the province. Nearly 350 of them were ultimately put into service, and the current government has not built any more. Metrolinx, the provincial transit agency, actually removed some earlier this year.

Private companies such as Petro-Canada are stepping in to build charging stations and there are now roughly 1,400 public chargers in Ontario, according to federal and provincial data. Experts say more are needed.

"It's not just that they haven't supported building these things up, they've actually got in the way of what we were already doing," said Dianne Saxe, Ontario's former environmental commissioner whose job was axed by the Ford government.

The transportation sector makes up Ontario's largest chunk of greenhouse gas emissions, at 35 per cent. But electric vehicles are not the silver bullet, she suggested.

"I don't start with saying we need to change gasoline cars into electric cars," she said. "What we most need to do is reduce the need to travel by car."

Building denser communities that reduce the need for vehicle travel is the best "bang for the buck," Saxe said, followed by public transit, followed by electric vehicles for transportation needs that can't be met the first two ways.

Clairman believes that the pace of electric vehicle sales will one day pick up in Ontario, just perhaps not as quickly as it otherwise would have.

"Do I think rebates would help?" she said. "Yes. We'll get there eventually either way. We'd love to speed it up. With the urgency of climate change we really should speed it up."

This report by The Canadian Press was first published Dec. 15, 2019.

If there are any thinkers in

If there are any thinkers in Ford's Conservative government, they'll move to restore a rebate in Ontario that is on par with the provincial rebates in BC and Quebec, or better, as they have some catching up to do. They have not hesitated over the years to subsidize fossil fuels and the carmakers that build the cars that use fossil fuels. This is very clear. If instead, they begin to aid the shift to clean renewable energy and EVs, as well as work on expanding public and especially active transit, as Ms. Saxe has thoughtfully argued, they will reduce not only emissions, but also air pollution and secondary illnesses such as asthma, COPD exacerbations, bronchitis, heart disease, and perhaps dementia; obesity and secondary illnesses like diabetes, hypertension, depression, arthritis, and heart disease; traffic congestion and secondary business inefficiencies; accident rates and related injuries and deaths; road maintenance and expansion costs; parking maintenance and expansion costs; and so on. There is such an obvious financial pay-off in terms of healthcare dollars saved that it is shockingly incompetent of Ford's team not to realize this and plan accordingly. Same goes for every other provincial government of course, but Ontario has the big population centres that should make this a foremost priority there.

Besides, Ford's so trashed his reputation with all his wilful attacks on things that the majority of Ontarians value highly (like public education, affordable university education, a tree-planting program, a highly successful and well-functioning carbon trading system, renewable energy initiatives and their related jobs, reputable police leadership, an independent municipal election in Canada's largest city, and so on) that he could use the positive press that restoring this rebate would bring.

By the way, the public should not be paying to install charging stations everywhere. Ford should demand that other automakers chip in for the costs like Tesla has been doing all along, building out its supercharger network as well as frequently donating destination chargers to hotels and shopping areas, to ensure buyers have the confidence to transition. Either the price limits for rebate should be removed from Tesla's, in recognition of their investment for EV drivers, sparing governments using tax dollars, or other automakers should be required to match Tesla's buildout between them all, as they've all declined to collaborate on the charging infrastructure network Elon Musk invited them to share and invest in, for common use.

Electric cars have become reasonable substitutes for gasoline cars, but gasoline cars are absurd, designed to increase consumption, not to serve our actual needs. If we are going to be subsidizing vehicles, let's try to get 50% payload. Bicycles get 90% but SUVs can run under 5%. An electrified velomobile is all a commuter needs, and it would save greatly on infrastructure. It would also work well as a private pod on a robot expressway.

Good grief - where to start?

Good grief - where to start?
No rebates, no sales, = less effort from makers to market electric vehicles. Ontario will be pushing their gas vehicles between almost obsolete gas stations before Ford gets his chaotic brain in gear. It doesn't take a rocket scientist to figure out the infrastructure etc. we are going to require, rebuild, renew, reinvent as climate change robs us of our "easy" life style. Do the PC's and their ilk want to preside over the collapse of Canada's economy, its citizens' mobility, our crushing incompetence and total failure of competitivness? All these are coming at greatly accelerated rates while politicians sit sucking their thumbs!