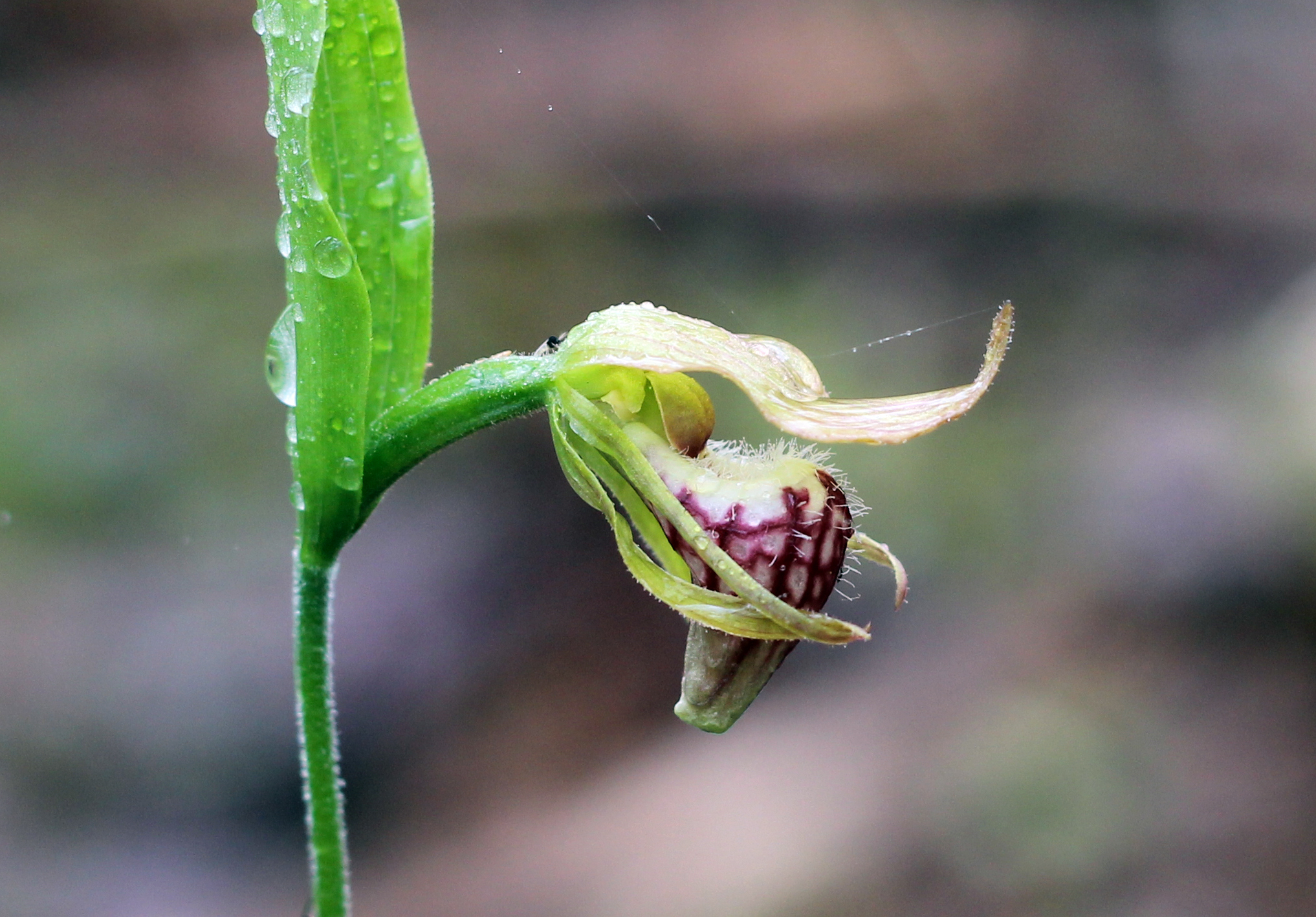 I found my first Ram’s Head Lady Slipper while on my hands and knees, along an obscure walking trail in Hants County, N.S. Its delicate purple flower, no larger than my fingernail, is now the focal point of a groundbreaking lawsuit in the province’s capital.

This flower is endangered, listed alongside 70 other at-risk species under Nova Scotia’s Endangered Species Act (ESA), each entitled to timely conservation measures depending on the severity of its case, such as the establishment of expert recovery teams to speak on its behalf, the drafting of recovery plans outlining its rescue and the identification of its core habitat so it might be protected. The Ram’s Head Lady Slipper was owed all of these things within a year of being listed.

To date, this flower enjoys nearly none of the aforementioned protections guaranteed by the Endangered Species Act, and by no means is it alone. Of the 71 species listed under the ESA, the majority have in some way not been fully accommodated despite legally mandated deadlines.

This ongoing lethargy has been the subject of critical reports from both the East Coast Environmental Law Association and the province’s auditor general, released in 2015 and 2016, respectively, with the latter concluding that “species at risk need to be a greater priority for (Nova Scotia).”

That hopelessly fragile flower I found one crisp morning in May, its petals wilting prophetically, was in sore need of a good lawyer.

The Endangered Species Act of Nova Scotia, and the government’s widely recognized failure to uphold it, became the subject of legal action in January 2019, when lawyer Jamie Simpson of Juniper Law set into motion an application for judicial review, a lawsuit intended to force the province to fully accommodate species at risk. The suit centres on six species in particular, their various crises illustrating the department’s alleged failings — the eastern moose, Canada warbler, eastern wood peewee, black ash, wood turtle and, of course, the Ram’s Head Lady Slipper.

All lawyers need clients, and in this case, Simpson represents the Federation of Nova Scotia Naturalists, the Blomidon Naturalists Society and the Halifax Field Naturalists, organizations which, in their habitual admiration for the flora and fauna of their home province, have witnessed concerning trends in regional biodiversity.

“We’re probably like many naturalist clubs, in that when we were founded, there were no activists in the group, and I think that has changed,” said retired population ecologist Soren Bondrup-Nielsen, a veteran of Acadia University’s biology department and current president of the Blomidon Naturalists Society.

While naturalists are a traditionally quiet bunch, Bondrup-Nielsen has been advocating a culture change for some time now, encouraging his fellow lovers of nature to step beyond their comfort zones and share their uniquely relevant perspective. Their vote to join in the prosecution was unanimous, with one abstention.

“We naturalists are the ones who, when we’re outside, can see things and interpret them, like clearcutting, soil erosion, the works. If we don’t try to educate people and tell them what’s going on here, who will?” Bondrup-Nielsen said.

This case saw its first round of hearings in spring, then another this past July, all preamble to the main event before Justice Christa Brothers on Sept. 23 in Nova Scotia Supreme Court, Halifax. A followup session on Oct. 1 became necessary to accommodate all arguments from Simpson and the province’s lawyer, Jeremy Smith.

“I think we made a solid case,” Simpson said, speaking in early December while anxiously awaiting the verdict. His impression is that Brothers was receptive to his points and had done her homework, and he’s confident the record — composed of government documents concerning the management of species at risk thus far — clearly demonstrates the ESA violations he has alleged.

Smith argued two points in particular: first, that the provincial government has made significant strides toward fulfilling the ESA by establishing recovery teams for many of its listed species — all since the lawsuit was filed in January — and second, that naturalists, specifically those bringing this lawsuit against the province, had not adequately demonstrated their right to force government action on species at risk, a nuanced argument concerning the legal mechanism “mandamus.” To this, Brothers reportedly asked Smith if he expected the eastern moose to come before court and exercise this right for itself.

While Simpson originally hoped for a decision from court in November, now he admits it could arrive any time in the next few months, at which point, he or the province will have the opportunity to appeal.

“I’m cautiously optimistic,” Simpson said. “We’re hoping that if the court orders the government to get up-to-date on its current legal obligations, it will be sufficient to essentially shift the culture of the department to one where they are on top of things, creating the necessary infrastructure to make sure they’re doing what they’re legally required to do.”

Canada’s federal Species At Risk Act (SARA) was established in 2002, containing many of the same provisions as Nova Scotia’s 1998 ESA and more. Recognizing the need for complimentary regional legislation, most provinces shaped acts of their own in the late 1990s and early 2000s, all of which have suffered from a chronic lack of enforcement ever since. As a consequence, while the lawsuit of Juniper Law is the first of its kind in Nova Scotia, and the Maritimes, it is not the first in Canada.

Ecojustice is a registered Canadian charity dedicated to upholding environmental law, and species at risk have kept its staff very busy. In 2010, it sued the federal government over its failure to identify critical habitat (the federal equivalent of core habitat) in the recovery strategy (recovery plan) of an endangered shore bird, the piping plover. That case was settled outside court with the stipulation that government also address a backlog of recovery planning for more than 50 other endangered species. When the federal government failed to follow through on this commitment, Ecojustice took them to court again in 2014, this time for 162 recovery strategies which were grossly overdue under SARA, some by as many as five years. This lawsuit was a success and our federal government was ordered to catch up.

I reached out to Ecojustice senior scientist Liat Podolsky this November for an update, and while our federal government has made meaningful strides toward addressing these overdue recovery strategies, she said they remain extremely hesitant to identify and protect the critical habitat of threatened and endangered species, and routinely refuse to use the special powers granted them by SARA for those species in immediate peril. These include the issuing of “emergency orders” and “safety-net orders,” which extend SARA protections onto private, provincial and territorial land.

In 2017, Ecojustice took Ontario’s natural resources and forestry minister to court for failing to produce long overdue recovery strategies for 37 listed species, a requirement under the province’s Endangered Species Act of 2007. This legal action forced the minister to settle, committing to quarterly updates on remediation efforts.

“Biodiversity is almost always sacrificed when there’s money to be made, unfortunately,” Ecojustice staff lawyer James Gunvaldsen Klaassen said. “Complaints that the protection of species interferes with industry come up in every province. It’s very difficult to make the case for protecting a small ecological niche if there are powerful industry forces aligned against it.”

In 2018, Ecojustice opened an office in Halifax, intent on addressing the widespread species-at-risk shortcomings across the Maritimes. They are presently serving as “interveners” in the ongoing lawsuit of Juniper Law.

A 2012 report from Ecojustice entitled “Failure to Protect,” which examined the strength and enforcement of species-at-risk legislation in each Canadian jurisdiction, concluded that “across the board, Canada’s federal, provincial and territorial governments are doing an abysmal job protecting our at-risk species and the habitat they need to survive and recover... No jurisdiction should be satisfied with its performance.”

The World Wildlife Fund’s 2017 Living Planet Report concluded that a full 50 per cent of Canada’s monitored wildlife populations were in decline between 1970 and 2014, and declining populations had done so an average of 83 per cent.

“At the federal level in Canada, the primary legal mechanism for protection of imperiled species is the Species At Risk Act, or SARA,” the report points out. “SARA was adopted in 2002, but our analysis has shown that since that time, listed populations have continued to decline by an average of 28 per cent. Our results suggest that the rate of decline of these at-risk species may have actually increased despite protections afforded by SARA. We need to take steps now to make sure that our protected species are exactly that: protected.”

This report and others signal the ongoing degradation of Canadian biodiversity, a fact made clear by Simpson and his clients in the course of their lawsuit. Failures to uphold species-at-risk legislation, they said, are taking their toll. As the final decision of the court approaches, Simpson is only too aware of the precedent this case may set, either reinforcing the results of Ecojustice’s 2014 case against the federal government, or contradicting them, and carrying enormous implications for similar legal actions in the future.

“It’s both exciting and nerve-racking,” he said.

It seems likely in this

It seems likely in this capitalist economy of greed and exploitation which seems to be reaching a global apogee, we are bound to destroy the life saving conditions for most of the non-human species on this planet. I truly wonder how these captains of industry and the laissez faire economy think they, their descendents or even their enslaved/disenfranchised human sources of energy and consumption will survive on a planet denuded of natural resources?