Injunction sought as co-op, union in court over picketing at Regina refinery 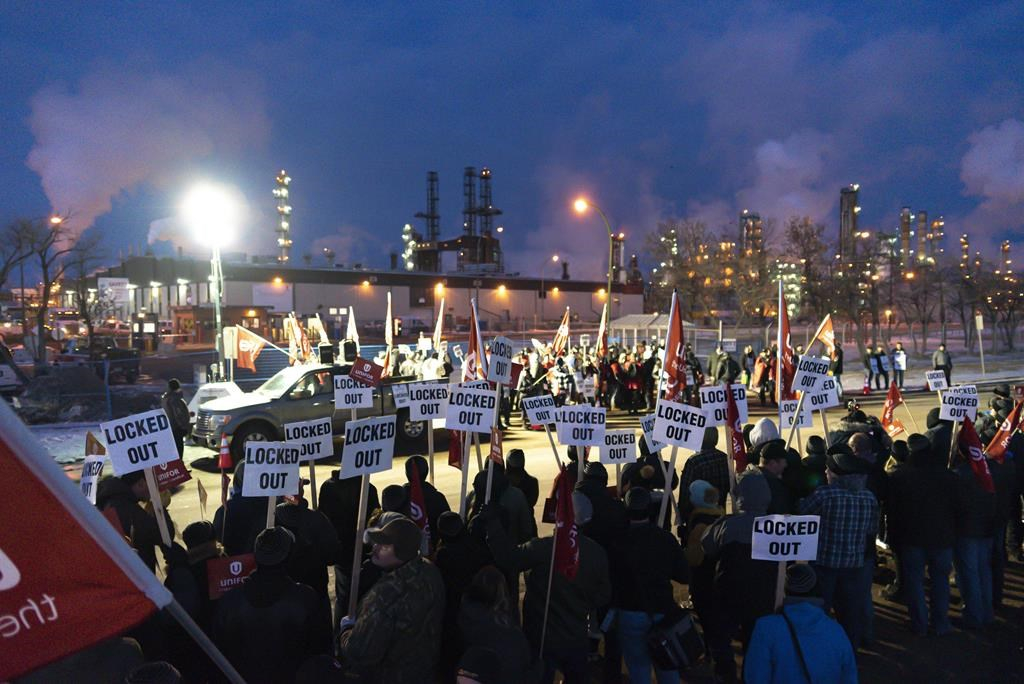 Members of Unifor Local 594 hold signs during a rally outside the Co-op Refinery in Regina on on Thursday, December 5, 2019. File photo by The Canadian Press/Michael Bell
Previous story
Next story

A nearly three-week labour dispute between a Saskatchewan petroleum refinery and hundreds of its workers moved from the picket line into the courtroom Monday, with the company seeking an injunction against some of the union's activities.

Eileen Libby, a lawyer for the Federated Co-operatives Limited, told court that picketers with Unifor Local 594 have been blocking access to the co-op refinery complex in Regina and intimidating replacement workers, contractors and suppliers.

Libby said there's been a lack of action from city police, and the court is the only place the company could turn to stop the union from engaging in what she called illegal conduct.

"The union does not have a right, no matter what it says in arguments, to block the employer's access to its own premises," she argued. "The employer is entitled to use replacement workers."

Union lawyer Crystal Norbeck questioned the allegations of unlawful conduct and argued there should be no restrictions on members blocking or preventing replacement workers from entering the site.

"If the company can simply hire replacement workers at will and those workers have free access to the work site, there's no economic pressure, at all," she told the court.

"The right to picket is meaningless."

More than 700 refinery workers have been locked out since the start of the month, after Unifor issued a strike notice. Pensions are a key issue in the contract dispute.

Last week, Justice Janet McMurtry put some restrictions on the union's picketing until a full injunction hearing could be held. The judge reserved her decision Monday.

Unifor is calling for a national boycott of the facility's owner, Federated Co-operatives Ltd., made up of more than 190 independent retail co-operatives in Western Canada, operating food stores, gas bars, convenience stores and home centres.

The workers' last contract expired in February. The union declared an impasse in contract negotiations in September, which led to the appointment of a mediator.

Union blockades have impeded the delivery of safety equipment and chemicals to the refinery and have raised concerns about the ability of emergency vehicles to get through, Libby told court.

As a result of the union blockades, the co-op brought in helicopters to transport goods and staff across picket lines.

"Think about that for a moment: What a significant act that is," Libby said.

"It's expensive. It's strange, but it was necessary."

The union, however, said emergency vehicles have not been prevented from accessing the property.

Union lawyer Rick Engel said the company is wealthy enough to fly in replacement workers, and those on the picket lines have a right to obstruct access as a point of protest.

He said the union can engage in picketing that results in blocking or a slowing down the entrance of people into a site.

"They think they've got a law-given right to carry on business without interruption — that's what they think," he said of the company.

He also told the court that police have been doing their jobs by keeping the peace and not taking sides in the dispute.

This report by The Canadian Press was first published Dec. 23, 2019