Notley wants to try again for Alberta premier in 2023 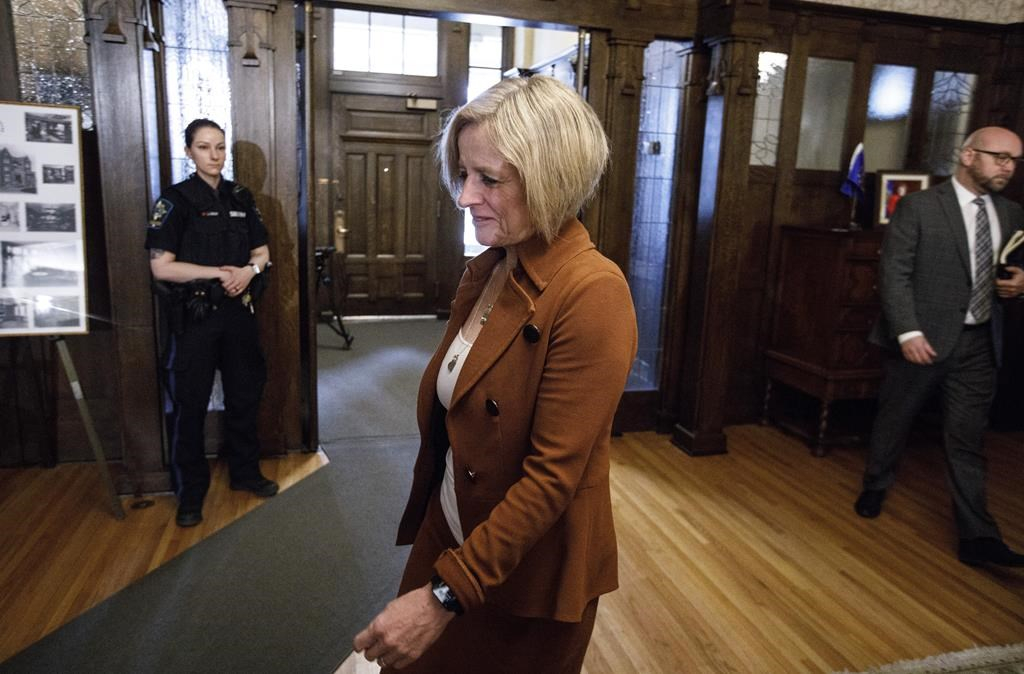 Rachel Notley walks out of a meeting with premier-designate Jason Kenney in Edmonton on April 18, 2019. File photo by The Canadian Press/Jason Franson
Previous story

In the last five years, Rachel Notley has gone from third-party leader, to government leader to Opposition leader, but says she will try again for Alberta's top job in 2023.

The reason, she says, grows from the steady drip of broken promises, half-truths, no-truths, gaslighting and self-dealing from Premier Jason Kenney and the governing United Conservatives.

"There's no way to critically oppose this (government) to make it better. We just need to change this," said Notley in a year-end interview.

"We need to take back our province and get it back on track. I'm a leader and so that's what I've committed to do."

Notley's one term as premier ended in April with Kenney and the UCP winning decisively in the provincial election, and the NDP taking almost all of Edmonton but few seats outside it.

Since then, said Notley, Kenney has broken faith with voters on multiple fronts, including failing to fund health and education as promised, by passing a bill to fire the election commissioner investigating his party and by ending inflation proofing for payments to the severely handicapped.

And she said it's also the cruel little knife twists, such as a bill passed this fall not only to roll back NDP-era workplace protections for workers on small farms, but to retract the right for those workers to be paid at all.

"Farm workers now don't have the right to a minimum wage. They don't have a statutory right to be paid anything," she said.

Alberta not only got a new government in 2019 it also got one of the most seasoned Opposition benches in its history, with many of Notley's cabinet ministers among the 24 seats the NDP won.

They have had to not only oppose but watch as Kenney's team dismantled many of their core policies: a consumer carbon tax, a climate change strategy, minimum wage hikes, an education curriculum overhaul and sweeping changes to the electricity system.

They've brought attention to the fallout from Kenney's budget by holding news conferences with affected parties, such as students facing higher tuition rates.

They've worked sources to leak out government plans to have rural municipalities begin paying for policing.

They have goaded Kenney, a proud defender of parliamentary tradition, into doing unparliamentary things. As they spoke in the chamber in late June on a bill to delay arbitration hearings with unions, Kenney passed out earplugs to his caucus members in the debate chamber. He later said it was to help out a member with hearing issues.

There have also been mistakes.

In late November, the NDP caucus publicly apologized for accusing the government of rewarding a party donor by bulk buying liquor from his store to stock the Royal Alberta Museum. It later turned out that Notley's previous government made purchases from the same outlet.

The NDP also trumpeted a shadow budget to counter the government one and show that it has ideas to govern, but the party didn't deliver it until six weeks after the Oct. 24 budget, after the fall session had ended.

The two sides brought out the partisan worst in each other, with Notley calling Kenney the most corrupt politician in Canadian history for firing the election commissioner and Kenney's team labelling the NDP Alberta's worst government for racking up massive debtloads.

Notley said her caucus made mistakes in government but had the province on the right track, particularly with a suite of tax incentives to encourage diversification and lure high-tech industries.

"We have a record that doesn't hurt us. It's not perfect, no record is," she said.

"We certainly were confronted with a lot of challenges, but we also took a lot of responsibility for it. We didn't spend four years screaming at clouds, making everything everybody else's fault."

This report by The Canadian Press was first published Dec. 29, 2019.