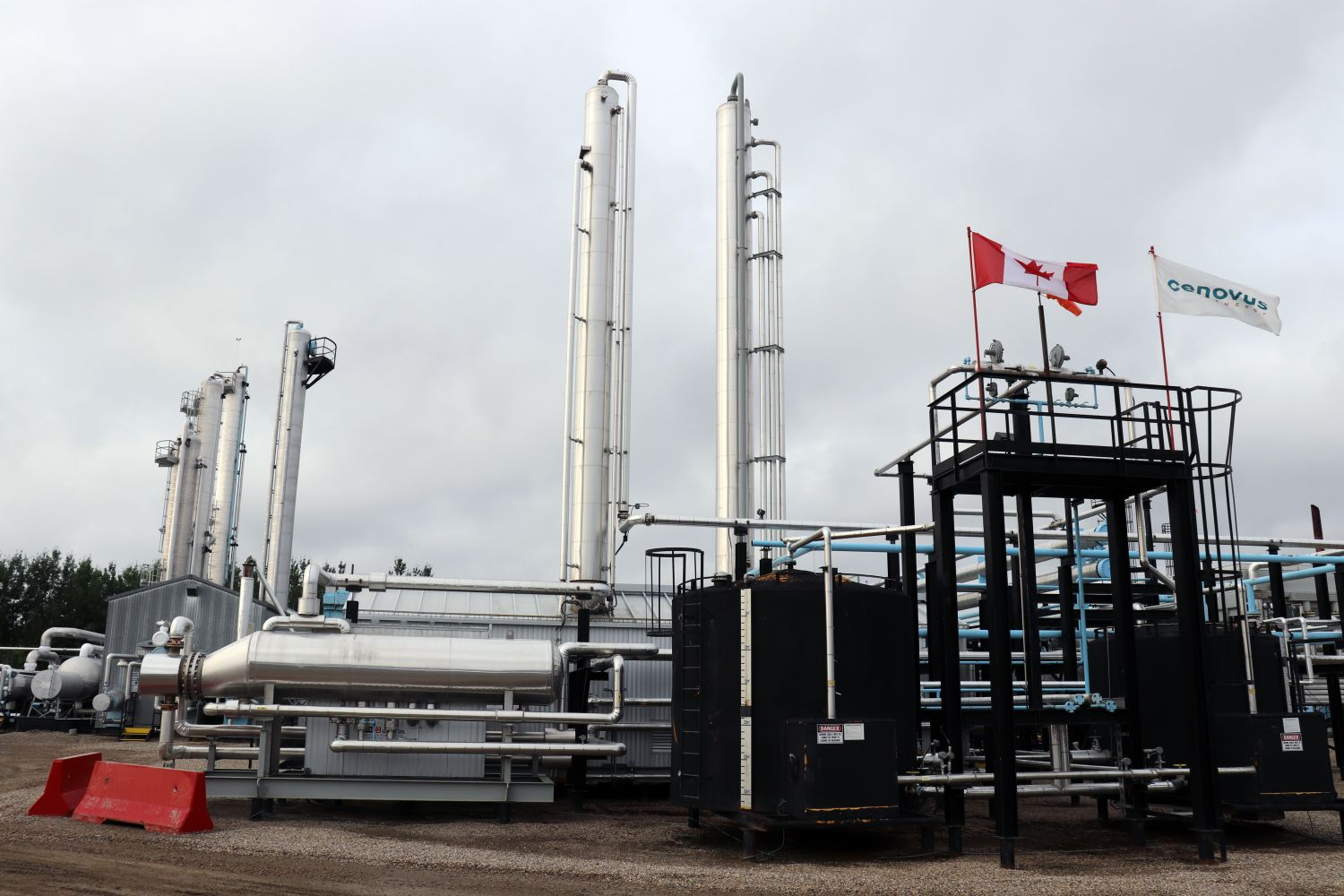 Cenovus Energy’s plan to green its operations and ultimately reach net-zero emissions by 2050 is being welcomed by some analysts as a good starting point, while others wonder why it ignores a major share of global carbon pollution — the burning of its own product.

The Canadian oil and gas giant unveiled a suite of environmental, social and governance targets for its business on Thursday, including a commitment to reduce per-barrel emissions 30 per cent from 2019 levels by 2030, and “hold its absolute emissions flat” by that year.

This means it expects its pollution to be “roughly the same” a decade from now as it is today, a company spokesman told National Observer, even as it plans to ramp up production of oil and gas.

The company says it will achieve this by pursuing a new “emissions strategy” consisting of a long menu of technological fixes — things like combining heat and power, using solvents such as butane instead of superheated steam in drilling, deploying big data and using carbon offsets.

Cenovus also said that in addition to its emissions targets, its “long-term ambition is to reach net-zero emissions” by 2050. “The meaningful targets we’re announcing today build on our achievements to date and position us to thrive in the transition to a lower-carbon future,” president and CEO Alex Pourbaix said in a statement.

But the emissions targets from Cenovus only cover the firm’s operations, like the fuel burned in its trucks or flared off from its gas plants, as well as the pollution from the electricity it buys to power itself.

It does not include pollution created when people burn the oil they produce. Around 80 per cent of life-cycle emissions from oil and gas are from combustion, not extraction.

“It’s not possible for us to achieve this safe-climate world if oil companies like Cenovus are still extracting oil in 2050. If they were serious... they would be pursuing a phase-out of their oil sands projects that protected their workers and impacted communities.”

The 'gold standard' for fossil-fuel companies

In December, Spanish energy giant Repsol committed to its own net-zero emissions targets — but this also included carbon pollution associated with the burning of their products.

Including these so-called “Scope 3” emissions in targets is still a rare move in the industry, according to a report from Carbon Tracker, with Shell and Total the only other energy giants to have put them on the table.

“The gold standard now for fossil-fuel companies, if they want to claim to be truly net-zero emissions, is that they need to ensure that the use of their products also have net-zero emissions,” said Nathan Lemphers, a post-doctoral fellow at the Smart Prosperity Institute.

“As we’ve seen with the tobacco industry, these companies that are selling the product that have these harms, will need to account for the full supply chain.”

Cenovus is a large, active oilsands producer that is facing headwinds from a changing global market starting to shift towards a low-carbon economy. Norway's largest pension fund, for example, recently pulled out of the oilsands, which included investments in the company.

It has also seen bursts of political activity. During the summer before Canada's October federal election, it took out full-page ads in dozens of newspapers alongside other energy firms to call on "leaders of all political stripes" to support the industry. Cenovus is one of the most active firms in Ottawa when it comes to lobbying, according to a report by the Canadian Centre for Policy Alternatives.

Its carbon pollution has also been going up, according to its own 2018 environmental report, from 5.5 million tonnes of carbon dioxide equivalent in 2014 to 8.4 million tonnes in 2018.

If the planet has any hope of holding global heating to safe levels for humanity over the coming decades, then fossil-fuel companies like Cenovus must engage constructively in cutting their carbon pollution, Lemphers said. The company’s targets are “an improvement, compared to a lot of its peers” in the oilsands, he noted.

Benjamin Israël, a senior analyst at the Pembina Institute, added that the targets send “the right signal that companies are willing to accept more stringent policies coming from the government.”

Reg Curren, senior adviser for media relations at Cenovus, said the company was not expecting a “linear progression” in terms of achieving its target. He said emissions intensity may “fluctuate from year to year.”

“Ultimately, even as our production increases over the next 10 years, we expect our total emissions to be roughly the same in 2030 as they are this year,” he said.

“We have multiple pathways to holding absolute emissions flat by the end of 2030 and believe that new technologies, such as solvent, combined with improved operation techniques through using such things as data analytics, will get us to the target.”

But Tucker said the company’s 2030 targets were out of touch with what is needed to sustain the planet. Cutting emissions intensity per barrel, and cutting carbon pollution from drilling for oil and producing it, is simply “window dressing” in a world where there can’t be new fossil-fuel product approvals, she said.

That is particularly true when Canada’s own national Paris agreement target of cutting pollution 30 per cent below 2005 levels by 2030 is taken into account, argued Andrew Gage, a staff lawyer at West Coast Environmental Law.

Adding up the various countries’ pledges does not result in the amount of pollution cuts necessary, so countries like Canada must be more ambitious. In that context, the targets by Cenovus were “offensive,” he said.

“This may well be good within that industry, but there’s a fundamental contradiction here, that this industry is very dependent on increasing its emissions, and then on selling products which — when they’re burned — go into the global atmosphere,” Gage said.

“So even if this is a good position relative to others in the industry, it is not a globally defensible position.”

Nothing green about it.
Cenovus says it plans to reduce emissions by barrel by 30% by 2030 while keeping emissions flat, equivalent to today's level.
This promise implies increasing production and combustion by 43%.
Since 80% of emissions occur at the combustion end — where no intensity-reduction will take place — full life-cycle emissions would actually increase by 34%.
Cenovus envisions a world in which total emissions from its production will rise by one third by 2030.
Wrong direction.

Note also that the entire industry grossly under-reports its emissions. So any claims about cutting emissions should be taken with a large grain of salt.
But Cenovus is actually announcing a net increase in emissions by 2030.
No science supports this trend.

I am admittedly naive about

I am admittedly naive about the science involved around what Cenovus is planning. And I have real concerns about our future as climate change seems inevitable, with outcomes one cannot predict. However, it seems likely that oil based products (including but not limited to fuels) will be needed past 2050, albeit in smaller quantities. It seems to me that efforts to establish extraction processes that are carbon neutral would be a good thing in this context.